Sydney-based investment powerhouse Magellan Financial Group has ramped up its push into the retail investor market by launching a series of low-cost funds, as it posted healthy profits at its full-year results.

The money manager, with $95.5 billion in funds under management, on Wednesday unveiled three new funds that will be available by the end of the year, appealing to "fee conscious" investors under the banner of Magellan Core Series.

Billionaire investor and Magellan chief financial officer Hamish Douglass said the company had previously been locked out of the low-cost model and these new funds would be "accretive" to the group's operating margins. 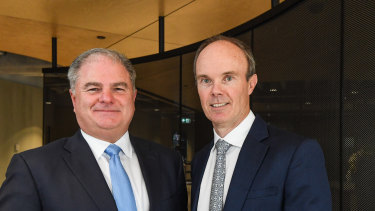 "We are dramatically increasing our addressable market," Mr Douglass said. "There is a massive and growing market in that space that we are not participating in."

"It leverages the core DNA of our research process into what we believe is a very good offering for those that are fee conscious," Magellan chief executive Brett Cairns said.

Mr Douglass strongly denied the company would lose money from launching the low-cost model, responding to investor concerns that customers could rip cash from high fee paying funds to the new, cheaper options.

"If you’re worried that this will lead to a poorer economic outcome for Magellan, that’s not going to happen," Mr Douglass said. "I have to say, people don’t understand our business if they think it’s going to lead to a margin decrease."

"In the US, ETFs are close to 50 per cent of the overall market now, a big part of equity markets now is passive," he said. "A product like this is cheaper, it potentially opens up a wider pool of investors."

But Mr Kururangi said it would be three to five years before the product gained traction. "It takes time to get them up and get credibility on the product."

The new funds come as Magellan confirmed it would pay shareholders a dividend of 122¢ per share, up 10 per cent from the corresponding period last year, after full year profits increased by 20 per cent to $438.3 million.

Mr Cairns said the retail investors had proved "resilient" through the pandemic-induced market volatility and capital had been preserved in the company by cutting executive bonuses and freezing salaries.

The group also provided an update on its retirement income product, that Mr Douglass said would be a world-first. "As far as we’re concerned, there are no competitors anywhere in the world that are doing this."

The details of this product remain unclear but the group said it was likely to be available to clients by the end of the year, subject to regulatory approvals that had already been delayed because of COVID-19.

"If there was a time to launch this product, it would be today. I’m anxious to get it out there but very mindful we have to go through the final regulatory hoops," Mr Douglass said.