Magellan on Thursday reported its total funds under management (FUM) had increased by $900 million to $70 billion in the three weeks to March 31. However, Magellan saw underlying net outflows of $1.1 billion, meaning the rising FUM was tied to market movements. 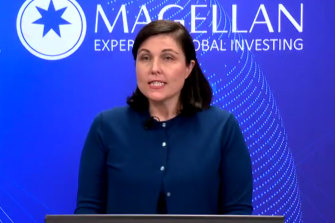 The outflows included $500 million from retail clients and $600 million from institutional clients and follow months of clients ripping money from the business. However, investors jumped on the more positive news which pushed the stock value up over 12 per cent to $17.30 per share.

Morningstar analyst Shaun Ler said the outflows were lower than the market had expected, which had caused some investors to become optimistic about the company’s outlook. However, Mr Ler said this did not mean the worst was over for Magellan.

Magellan’s flagship global equities fund has consistently under-performed the benchmark, due to a series of investment decisions that saw an over-exposure to Chinese stocks before the government’s regulatory corporate crackdown and stakes in companies like Meta and Netflix, that struggle in high-interest rate environments.

Mr Ler said this fund was still “stuck in the middle” and analysts would need to see a sustained turnaround in the performance before the share price will meaningfully recover. “Some people could view this and think the worst is over,” he said. “However, the way I see it – it could only be temporary.”

Argo Investments’ senior investment officer Andy Forster said his Australian equities portfolio does not hold Magellan shares, but said he was “certainly not thinking of stepping up to buy it” following the latest FUM update.

“Money has been going out the door, performance hasn’t been too great,” Mr Forster said.

Mr Forster said a company like Magellan was difficult to value as there remained many unknowns, including whether the fees would need to be reduced to stem outflows or when key personnel would return.

Plato Asset Management chief investment officer Don Hamson sold out of Magellan around one year ago but said he would need to see at least another quarter of performance before considering buying back in. “Perhaps the worst is over,” Mr Hamson said. “But their performance has been challenged for some time. And that’s the leading indicator of a funds management business – the performance, then the FUM flows from that.”

Magellan’s FUM and share price has been in freefall since December, when the abrupt resignation of chief executive Brett Cairns triggered a series of shock announcements, including the loss of Magellan’s largest investment mandate and star investor and founder Hamish Douglass taking sick leave.

The turmoil has seen investors profit from short-selling Magellan, and its longstanding investors dump the stock. Magellan has sought to stabilise operations by visiting institutional clients in Europe in March and issuing financial incentives to retain staff, during what interim chief executive Kirsten Morton said had been a “challenging period”.