What’s happening: The Meishan terminal at the Ningbo-Zhoushan Port in eastern China resumed operations Wednesday, ending a two-week long suspension after a dock worker tested positive for Covid-19. The closure was stressing tangled supply chains, as companies face sky-high costs and delivery delays 18 months into the pandemic.
Want more good news? For all the supply chain problems making it harder to get your hands on a sofa or a laptop — including a dearth of shipping containers, coronavirus complications and shortages of key items like computer chips — recent data shows that global trade is still booming, providing crucial fuel for the economic recovery.

In the second quarter of 2021, the value of international merchandise trade for Group of 20 countries reached a new record, the Organization for Economic Cooperation and Development said this week.

A fresh report from the CPB Netherlands Bureau for Economic Policy Analysis on behalf of the European Commission shows world merchandise trade is stabilizing at very high levels after a “vigorous” recovery.

Merchandise trade is about 5% higher than it was before the pandemic, the group said Wednesday.
A fair question: How can global trade be surging with supply chains under so much duress?
The strength of consumers, which are on shopping sprees after months of saving, is part of the story.
The Port of Long Beach said earlier this month that it handled a record number of containers in July, driven by “resilient consumer demand.” The Port of Los Angeles processed 4% more containers in July compared to 2020.
“This remarkable, sustained import surge is pushing the supply chain to new levels,” Port of Los Angeles Executive Director Gene Seroka said.
Higher demand for commodities, particularly from China, Japan and South Korea, is playing a role, too, the OECD said. Australia’s exports rose 10% last quarter due to sales of metals, coal and cereals, while Brazilian exports jumped 29% because of demand for iron ore and soybeans.
But the OECD also said that “rising commodity prices explain a large part of the increase.” That logic tracks: If firms are paying more for corn, that means the value of shipments goes up.
This sends a more ambiguous signal for the economy as policymakers fret about inflation.

Right now, it looks like nothing can stop the stock market.
The latest: The Nasdaq surpassed the 15,000 level for the first time ever Tuesday, rising 0.5% thanks to continued strength in tech stocks like Microsoft (MSFT), Nvidia (NVDA) and Google owner Alphabet (GOOGL), my CNN Business colleague Paul R. La Monica reports. 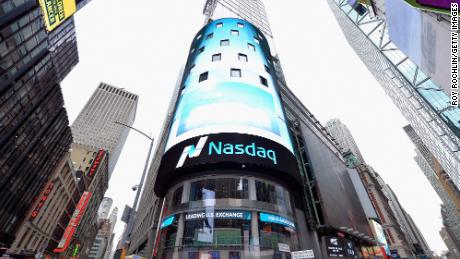 According to research firm Bespoke Investment Group, this is the sixth time the Nasdaq has crossed a 1,000-point threshold since the pandemic began.
That’s not all: The S&P 500 gained about 0.2% and also hit a new record high. It is not far from topping the 4,500 milestone.
And then there’s the Dow. The most famous Wall Street market barometer, home to Apple (AAPL), Coca-Cola (KO), Disney (DIS), Johnson & Johnson (JNJ), Walmart (WMT) and 25 other American titans of industry, rose more than 30 points, or 0.1%, and is close to an all-time high, too.
It’s also approaching a notable milestone — one that’s more than two decades in the making.
The Dow is currently a little more than 600 points away from hitting 36,000. It only needs to go up about 2% to get there.
Why it’s significant: In 1999, journalist James Glassman and economist Kevin Hassett, who later served as a senior White House economic adviser to President Donald Trump, published a book titled “Dow 36,000: The New Strategy for Profiting From the Coming Rise in the Stock Market.”
The Dow peaked just above 11,400 by early 2000. Hassett and Glassman predicted that the Dow could hit 36,000 as soon as 2005. That didn’t happen. But 22 years after the book’s release, the prophecy is close to becoming a reality.

Pinduoduo is giving its entire profit for last quarter back

One of China’s biggest tech firms just made hundreds of millions of dollars — and plans to give it all away.
E-commerce firm Pinduoduo has pledged to donate the $372 million it earned last quarter toward the development of China’s agricultural sector and rural areas, my CNN Business colleague Laura He reports. In total, it expects to put up $1.5 billion toward such causes.
“This is an important and challenging task, which we will invest in patiently,” CEO Chen Lei said in a statement, adding that he would personally oversee the project.
The decision is significant for the Nasdaq-listed company, which posted a profit for the first time as a public company in the June quarter. It comes as Beijing steps up efforts to redistribute wealth — and flexes its regulatory muscle with regard to private companies.
Pinduoduo’s move follows a similar announcement from internet and gaming company Tencent, which said last week that it would put $7.7 billion toward achieving Beijing’s goal of “common prosperity” for all people. The company said it would support increasing income for the poor and addressing education inequality.
Investor insight: Pinduoduo (PDD) has never paid a dividend since it listed three years ago. But its stock has more than tripled, delivering handsome returns to shareholders. After earnings, shares soared 22% in New York on Tuesday.