London (CNN Business)Costco (COST), home of the ultimate big box store, is not mincing words about what it’s like to run a consumer business in the middle of a pandemic.

Step back: Costco managed to beat Wall Street’s earnings expectations for its most recent quarter, sending shares up 0.8% in premarket trading. But the company made clear that the process of getting products on shelves to meet a jump in consumer demand remains a nightmare.

Furniture delays have doubled wait times for some products, forcing the company to stock up early. The circumstances are similar for toys, as well as electronics like computers, tablets and video games.

“We’re ordering as much as we can and getting it in earlier,” Galanti said.
Even so, supply chains are so badly tangled that the company said it has chartered three ocean vessels for the next year to transport containers between Asia and the United States and Canada.
Remember: The complex network of ports, container vessels and trucks that moves goods around the world is still badly clogged after falling out of sync last year, and the cost of shipping is skyrocketing. Steel containers have become incredibly scarce and extremely expensive.
The situation is so severe that bigger companies are attempting to take matters into their own hands (smaller businesses, meanwhile, don’t have that luxury). Costco, which has leased several thousand containers to use on its chartered ships, said its fleet will make about 10 deliveries during 2022.
The new playbook: Costco’s strategy is spreading across the industry. Furniture giant Ikea has bought its own shipping containers to try to ease some logistical headaches. Walmart (WMT) has also chartered vessels to make sure it has enough stock for this year’s holiday season.
Costco’s business has been resilient despite its laundry list of supply chain woes and inflationary pressures. But not every company is weathering the storm as well.
Nike (NKE) cut its full-year sales outlook on Thursday, even though executives said that “consumer demand has never been higher.” Shares are down 5% in premarket trading on Friday.
“We are not immune to the global supply chain headwinds that are challenging the [manufacturing] and movement of product around the world,” Chief Financial Officer Matthew Friend said on the company’s earnings call.
Watch this space: The effects of the Delta variant of the coronavirus are still playing out and could make matters worse. Costco said it was reimposing limits on buying toilet paper, water bottles and cleaning products due to an “uptick in Delta-related demand.”

What’s next for Evergrande: Breakup, bailout or default?

The fate of ailing Chinese developer Evergrande remains up in the air after a deadline came and went Thursday without an update from the company on whether it plans to pay nearly $84 million in interest owed to bondholders.
The latest: Investors may have to wait a while longer to find out whether Evergrande will default on its enormous debts. It now has a grace period of up to 30 days on the first bond payment, my CNN Business colleague Laura He reports. A second payment of $47.5 million on another bond is due next week. 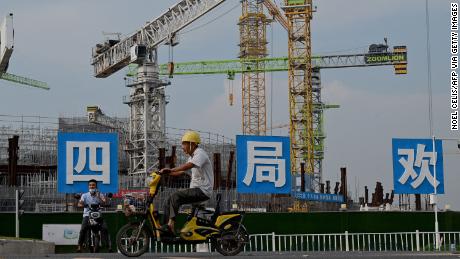 Evergrande’s stock plunged nearly 12% Friday in Hong Kong, reversing a recovery it staged the previous day on news that the company would pay interest on another bond issued in yuan to mainland Chinese investors. So far this year, shares have plunged 80%.
Filling the vacuum of information is mounting speculation that the Chinese government will have to intervene to limit the fallout that would be caused by the collapse of one of the country’s biggest real estate conglomerates.
Beijing has few good choices. It will want to protect thousands of Chinese people who have bought unfinished apartments, construction workers, suppliers and small investors, as well as limiting the risk of other real estate firms going under. At the same time, it has been trying for at least a year to rein in excessive borrowing by developers and won’t want to dilute that message.
Speculation about one option — an effective nationalization of the company — was stoked Thursday after a regional financial news website, Asia Markets, reported the Chinese government was finalizing a deal to restructure Evergrande with the backing of state-owned enterprises, or SOEs.
Citing anonymous sources close to the Chinese government, it said the plan would see Evergrande broken up into three separate entities, and the restructuring could be announced within days. Neither Evergrande nor China’s top regulator for SOEs responded to requests from CNN Business for comment on the article.

The European Union has worked hard to hold big tech companies accountable on issues like privacy, data security and antitrust. Its cause du jour? Well, it’s a little more … specific.
Catch up: The European Union proposed new rules on Thursday that will make USB-C ports standard on smartphones, tablets, cameras, phones, portable speakers and handheld video game systems.
The move is a setback for Apple (AAPL), which uses its own “lightning” port on the iPhone. While the new rules are years away from coming into force, Apple could be compelled to make changes to its signature product, my CNN Business colleague Chris Liakos reports.
“European consumers were frustrated long enough about incompatible chargers piling up in their drawers,” EU tech chief Margrethe Vestager said in a statement. “We gave industry plenty of time to come up with their own solutions. Now [the] time is ripe for legislative action for a common charger.”
EU citizens own three mobile phone chargers on average, according to the European Commission, the bloc’s executive arm. But 38% of consumers have not been able to charge their phone on at least one occasion because they didn’t have the correct charger on hand.
Apple, for its part, isn’t pleased, but said in a statement that it would continue to “engage with stakeholders to help find a solution that protects consumer interest.”
“We remain concerned that strict regulation mandating just one type of connector stifles innovation rather than encouraging it, which in turn will harm consumers in Europe and around the world,” the company said.

Also today: New US home sales for August arrive at 10 a.m. ET.
Coming next week: Congress has an important choice to make. Will it raise the debt ceiling, or will the United States default for the first time in history?
Source: Read Full Article