U.S. Bank Wealth Management CIO Eric Freedman argues that as ‘we get into the deeper part of the summer,’ inflation and dwindling savings will continue to weigh on consumers and could prompt more people to return to the workforce.

LinkedIn, a unit of Microsoft, saw its hiring rate fall 5.4% month over month in June on a seasonally adjusted basis, the lowest level since December 2021, according to new data released on Friday. On an annual basis, the employment platform's hiring rate tumbled 11.9% in June.

LinkedIn's hiring rate is calculated based on the percentage of the platform's members who added a new employer to their profile in the same month the new job began divided by the total number of LinkedIn members in the United States. The resulting number is then indexed to the average month in 2016. For example, an index of 1.05 indicates a hiring rate that is 5% higher than the average month in 2016. 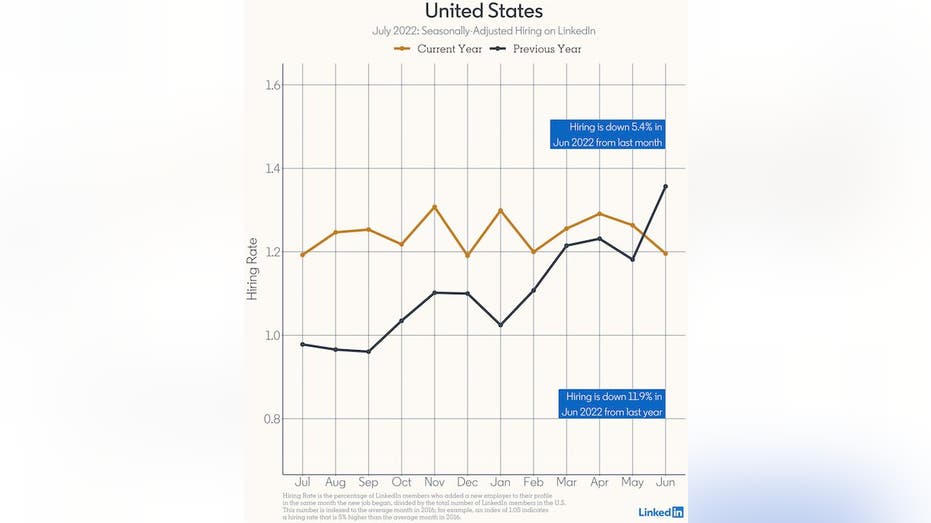 LinkedIn saw its hiring rate fall 5.4% month over month in June on a seasonally adjusted basis, the lowest level since December 2021. (LinkedIn)

LinkedIn principal economist Guy Berger noted that the tech industry saw "outsized weakness" in June, with its hiring rate falling 9.1% month over month on a seasonally adjusted basis, the lowest level for the sector since May 2021.

The data suggests that the labor market could potentially be starting to show signs of a slowdown amid tighter financial conditions and softening demand.

"It’s worth being cautious about reading too much into one month’s movement — we saw bigger month-to-month declines in February, December and last July," Berger explained. "That said, the macro environment is much less favorable now than it was then. Given historically high hiring last year (and even into the beginning of this year), there’s good reason to expect hiring will edge down at least a little during the 2nd half of the year, even if we avoid recession."

LinkedIn's hiring rate update comes as Wall Street is preparing to digest the May JOLTS report on Wednesday and the June jobs report on July 8.

Economists surveyed by Refinitiv are expecting the Labor Department to say that the U.S. economy added 268,000 new nonfarm jobs in June, down from the stronger-than-expected 390,000 in May and the weakest job growth since April 2021.

LinkedIn will release its full July workforce report next week.