Latitude Financial chief executive Ahmed Fahour has revealed the business is eyeing expansion into China and other Asian countries, as it looks to boost its growth by targeting the region's fast-growing and online-savvy middle class. 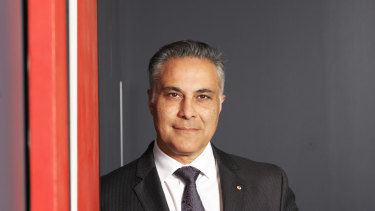 "We’re focused on this interest-free instalment space, and we've identified a couple of geographic expansion opportunities, and we’ve nominated a couple of internal executives who have built this kind of platform in Asia," Mr Fahour said in an interview.

"We’re at this moment actively exploring with a Chinese partner a specific and large opportunity in China. Were pretty well advanced in building that technology capability," he said.

Mr Fahour said the potential Chinese expansion had come to Latitude after it was approached by a partner with extensive access to China's market, and there were other opportunities in Asia that it was also considering.

"In financial services, payments and instalments, history, longevity, strength, brand are really valued in Asia and we intend to develop our product for that market as well," he said.

Mr Fahour outlined the overseas growth plans as he also said Latitude had agreed to a five-year extension to a deal under which it provides instalment loans and interest-free loans via Harvey Norman, its oldest partner.

After last year launching BNPL product LatitudePay, which provides quick approval for purchases under $1000, it is now expanding LatitudePay into larger purchases.

Latitude, which is owned by private equity funds, is planning its Asian expansion as its domestic business has benefited from a jump in consumer spending on "home economy" goods such as couches, beds and whitegoods during the pandemic. "This home economy has really been terrific in some ways and it’s been a real bump for us," Mr Fahour said.

The business, which aborted an attempt to float last year, posted unaudited management profits that were slightly ahead of its prospectus forecasts for the year to June, Mr Fahour said.

Mr Fahour said the company had delivered on the promises it made, and it would ultimately list but he did not know when this would be. “One day we will be a listed company. I don't know when, but it will happen one day in the future,” Mr Fahour said.

LatitudePay had posted growth of close to 100 per cent in volume after launching last year, he said, with 425,000 customers approved for this service.

While instalment loans have performed strongly, Mr Fahour said there had been a collapse in demand for unsecured personal loans and a sharp trend towards consumers paying down debt, helped by government support policies and early access to superannuation

He said 30,000 of Latitude's 2 million customers had sought hardship assistance, a 1.5 per cent share, much lower than the proportion of bank customers deferring their mortgages.

"So here we are in a situation now, whereby, with the benefit of people having access to JobKeeper, having access to state government support, having access to their superannuation account, they've completely avoided total ruin," he said. "And they've been able to sensibly get their affairs in order."