Hong Kong (CNN Business)HSBC is pushing even harder into Asia as the bank seeks to shore up its business in the wake of the coronavirus pandemic and ongoing tensions between the United Kingdom and China. It’s also bringing back its dividend, a sign that it’s optimistic about its ability to navigate the year ahead.

The bank — which is still headquartered in London even though it makes most of its money in Asia — told investors on Tuesday that it is planning to “step up” its investments in the region by about $6 billion. It’s also shifting more resources there, including relocating some key personnel. 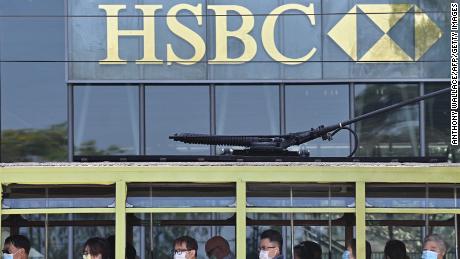 HSBC (HSBC) has outlined greater China, southeast Asia, and India as the “key drivers” of its future growth. It specifically wants to build up its presence in mainland China, defend its leading position in Hong Kong and establish Singapore as a wealth management hub.

It’s a plan that focuses on a continent that was delivering more than 80% of HSBC’s profits prior to the pandemic. Last year, Asia “was once again by far the most profitable region,” Chairman Mark Tucker said in a statement.
The continued focus on Asia came as HSBC announced that its pre-tax profit fell to $8.8 billion last year, a 34% slump compared to the year before. Revenue, meanwhile, fell 10% to $50.4 billion.

Still, that was still better than what analysts had expected. And the bank on Tuesday said it is aiming to reinstate its dividend “at the earliest opportunity,” starting at 15 cents per share.
Like other lenders, HSBC was forced to scrap its dividend last year at the request of UK regulators. The Bank of England relaxed some of that guidance in December.
“This was a difficult decision and we deeply regret the impact it has had on our shareholders,” Tucker said in his statement, adding that the board had “adopted a policy designed to provide sustainable dividends in the future.”
HSBC’s stock rose 2.2% in Hong Kong on Tuesday before pulling back somewhat.
There is also growing speculation that the company will exit parts of its business in other regions as it works to cut costs. This week, for example, the Financial Times reported that HSBC would shed its US retail banking network. HSBC did not confirm that report in its earnings presentation, saying that “we continue to explore strategic options with respect to our US retail franchise.”
However, the bank disclosed during its results that it was in talks to sell off its retail arm in France.

“[We] are in negotiations in relation to a potential sale although no decision has yet been taken,” it said. “If any sale is implemented, given the underlying performance of the French retail business, a loss on sale is expected.”
— This is a developing story and will be updated.
Source: Read Full Article