London (CNN Business)Markets spent weeks obsessing over the outcome of the US election. Now that it’s clear Joe Biden will be the next president, Wall Street is moving on.

What’s happening: Investors are turning their attention back to the pandemic — namely the search for an effective Covid-19 vaccine, which is crucial to projections that the economy will experience a strong rebound in 2021.
This just in: The Dow shot up more than 1,300 points, or 4.8%, in premarket trading Monday after Pfizer (PFE) said that an early look at data from its coronavirus vaccine shows it is more than 90% effective. European stocks and oil prices are also skyrocketing.

“Focus is likely to begin shifting back towards the vaccine and broader growth outlook,” Goldman Sachs strategists Dominic Wilson and Vickie Chang told clients over the weekend. The “likely delivery” of major vaccine news in the next few weeks, they said, is the “next key event.” 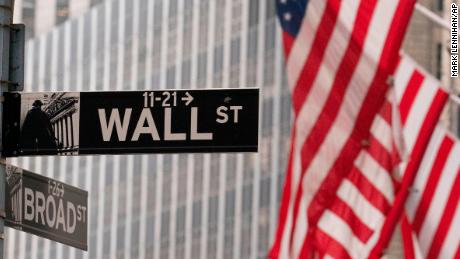 The race: Several potential vaccines are in large-scale trials in addition to Pfizer’s candidate. Last week, a top scientist from Oxford University, which is working on a vaccine with AstraZeneca, said there’s a “small chance” that results from its trials could be ready by Christmas.

Goldman Sachs said before the Pfizer announcement that a “safe, effective vaccine” could send stocks up by another 5% to 10%. Despite the pandemic, that would likely push top indexes to new records.
Of course, there could be stumbling blocks. “Significant delays” of a couple quarters could lead to declines of similar magnitude, according to Goldman, though the investment bank predicts investors would process this news more gradually. There could also be issues with distributing an effective vaccine on a mass scale.
Strategists at UBS told clients Monday that given the worsening virus outlook — the United States is quickly approaching 10 million Covid-19 cases —”quick approval of an effective vaccine” is a key ingredient for markets to keep rising.
“Unless a vaccine comes within a few weeks, slower [economic] data momentum is a real risk to the markets,” the bank said.
Up next: Investors will also be keeping an eye on the evolving US policy response to the virus as President-elect Biden begins the transition of power. Biden is expected to announce the names of the dozen leaders who will serve on his coronavirus task force Monday.
In the meantime, one constant that could keep boosting markets amid uncertainty about the pandemic and a vaccine is the strong response from central banks.
As Mohamed El-Erian, Allianz’s chief economic adviser, put it on Twitter: Using politics to explain recent market moves falls flat when you realize that bulls were raging no matter what. Investors liked the idea of a blue wave of Democratic wins, but were just as happy with the prospect of a divided US government.
A better explanation for gains? “Repeated evidence of central bank support for asset prices.”

Top executives are rushing to send Biden and his team their well wishes as they begin laying groundwork for a new US administration.
Over the weekend, even as President Donald Trump refused to concede, CEOs and top industry groups put out statements congratulating Biden on his win and urging him to act quickly to support an economy that’s struggling under the weight of the pandemic.
Here’s what they’re saying:

Others, like JPMorgan Chase CEO Jamie Dimon, didn’t mention Biden, but called for Americans to join together now that there’s a result:

What’s next: Executives care a lot about who Biden taps for key posts in his administration, which could indicate his direction of travel on policy. The president-elect’s choices for Treasury Secretary and Commerce Secretary will be particularly significant for the business community.

Not everyone is writing off a blue wave

The consensus among investors in recent days has been that President-elect Biden will face a divided Congress, limiting his ability to enact ambitious tax policies or bold new regulations. Wall Street has decided that’s good news, even though it means the next round of stimulus spending may be smaller than hoped.
But the makeup of the Senate isn’t a done deal. Control of the chamber could come down to a set of likely runoff elections in Georgia in January. Goldman Sachs is telling clients that they should be prepared for this to potentially give Democrats an edge.
“Although the likelihood that both Georgia Senate seats flip from Republican control to Democratic appears low, markets indicate that those probabilities are rising,” strategists led by David Kostin said in a research note.
If Democrats do wind up with control of the Senate, expect some of the trades that have paid out in recent days to reverse, Kostin said. Renewable energy stocks and a basket of equities that would benefit from infrastructure spending, which have recently taken a hit, could rise again, while tech stocks could lose ground.