American voters are closely following news about Russia’s invasion of Ukraine and want to help.

By a 63-32% margin, voters think the U.S. should be doing more for Ukrainians in their fight against Russia. 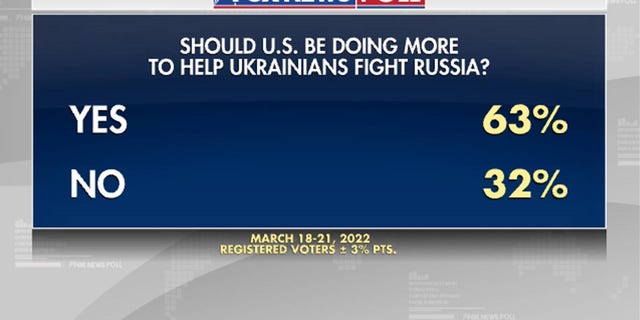 Fully 82% are concerned about the invasion and 76% approve of how Ukrainian President Volodymyr Zelenskyy is responding to it. 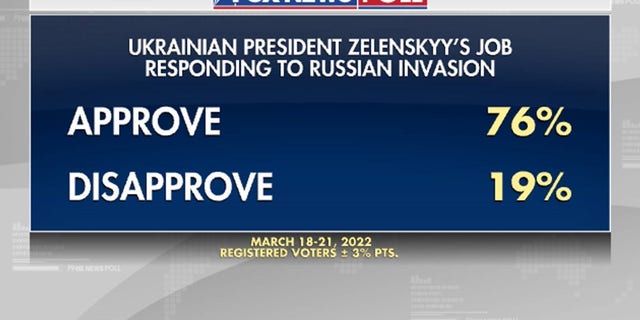 The new Fox News national survey also finds a growing portion say the Russia-Ukraine conflict matters to life in the United States: 85% feel that way, up from 76% last month. 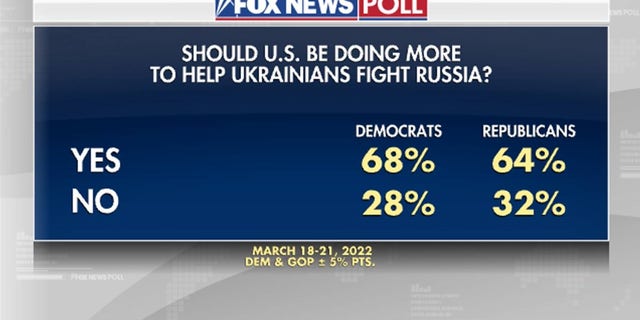 What do voters mean when they say the U.S. should do more?

Large majorities favor continuing strict economic sanctions on Russia (80% favor) and providing additional military equipment to Ukraine (78%).  Smaller numbers, although still majorities, favor easing immigration requirements to the U.S. for Ukrainian refugees (67%), sending additional troops to nearby NATO countries (60%), and creating a no-fly zone over Ukraine (52%).  Voters stop short of sending U.S. troops to Ukraine, as twice as many oppose (64%) the idea as favor it (31%).

Here again, there’s generally bipartisan agreement on each of these potential actions — although there is a partisan gap when it comes to easing immigration requirements for Ukrainian refugees.  That’s favored by 77% of Democrats compared to 59% of Republicans.

Support for additional action doesn’t mean voters aren’t concerned about the potential costs.  Three-quarters worry that supporting Ukraine could result in war between the U.S. and Russia (75%) and that a U.S.-Russia conflict could lead to a nuclear war (73%). 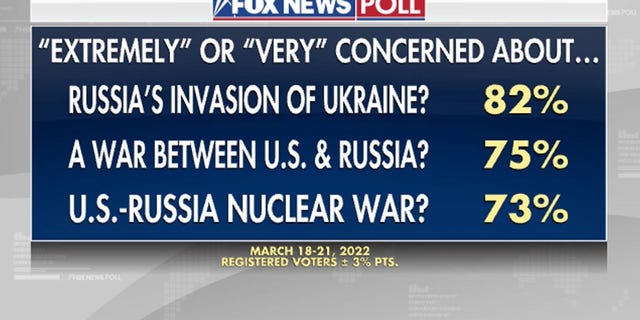 Those concerns limit their desire to help.  While 78% favor providing Ukraine more equipment — support for giving “substantial military aid” stands at only 36% if it risks U.S. war with Russia. 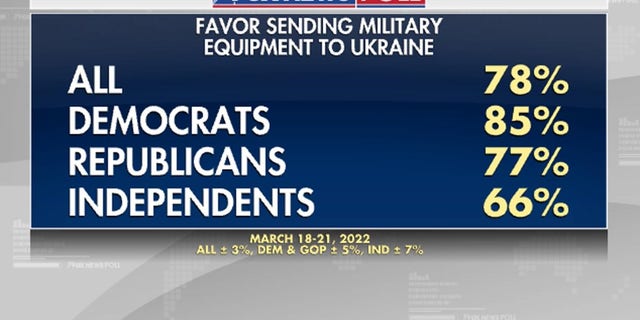 And even as 80% favor economic sanctions against Russia, that falls to 44% if sanctions lead to higher prices and financial hardship for Americans.

One month into the Russian invasion, many voters continue to lack confidence in President Biden’s judgment in a crisis (53%), and over half disapprove of both his handling of Russia (59%) and his response to the invasion (54%). 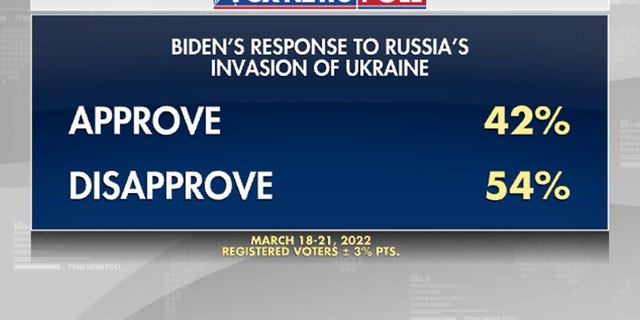 Despite mostly bipartisan support on policies to respond to Russia, there’s little unity on Biden’s ratings.  Democrats are four times as likely as Republicans to approve of his response to the invasion (72% vs. 17%).

“Biden’s actions in response to Russia’s invasion of Ukraine are mostly in-line with voter preferences,” says Democratic pollster Chris Anderson whose company Beacon Research conducts the Fox News survey along with Republican pollster Daron Shaw. “But in the face of inflation and entrenched partisanship at home, that’s not enough, at this point, to improve his overall standing in a meaningful way.”

Currently, 45% of voters approve of Biden’s overall job performance, while 54% disapprove.  Last month, it was 43-56%.  That 2-point increase in approval comes from a doubling among Republicans to 15% — up from 8% approval in February.  Eighty-two percent of Democrats and 33% of independents approve.  Among those who approve of Biden overall, 80% approve of his response to the invasion of Ukraine.

Dealing with coronavirus is Biden’s only net positive rating: 50% approve vs. 48% disapprove.

“Some journalists and pundits have suggested Biden might receive a ratings boost because of what political scientists call the ‘rally around the flag’ effect,” says Shaw. “But the ‘rally’ effect occurs after a president commits U.S. forces to a conflict, and that isn’t in play here. Perceptions of Biden in this case are much more tied to whether voters think he is walking that fine line between being tough with Putin and not getting the U.S. into another war.”

Veterans are more likely than other voters to approve of Zelenskyy (by 7 points), think the U.S. should be doing more for Ukraine (+8), and favor sending more troops to nearby NATO countries (+8).  They are less likely to favor creating a no-fly zone over Ukraine (-9), and to think U.S. support could lead to war between the U.S. and Russia (-7) or nuclear war (-9).

Conducted March 18-21, 2022 under the joint direction of Beacon Research (D) and Shaw & Company Research (R), this Fox News Poll includes interviews with 1,004 registered voters nationwide who were randomly selected from a national voter file and spoke with live interviewers on both landlines and cellphones. The total sample has a margin of sampling error of plus or minus three percentage points.