New York (CNN Business)Federal Reserve Chair Jerome Powell has made abundantly clear that he is more concerned about the challenging job market than the possibility that more stimulus may eventually lead to higher inflation. It’s a view shared by his former boss — Janet Yellen.

So with Yellen and Powell set to work closely together again, because she is President-elect Joe Biden’s nominee for Treasury Secretary, do investors need to worry that their policy position might push the already soaring stock market even higher?
“Powell has been talking a lot about the labor market and that the healing must include all workers that want jobs. And Yellen is a labor economist,” said Quincy Krosby, chief market strategist at Prudential Financial. “So it’s possible the Fed could be too dovish and let inflation get hotter.”

Inflation is not a worry currently. Consumer prices have risen less than 2% over the past 12 months, according to the Fed’s preferred measure of inflation, which looks at personal consumption expenditures.
And interest rates are not going anywhere anytime soon. They will be stuck near zero for several more years, according to the Fed’s latest economic projections — which were released Wednesday.

But some worry that may be causing bubbles to form. Stocks are near all-time highs and the housing market is red hot.
This is driven, in part, by a friendly monetary policy from the Fed and hope for more stimulus from the coming Biden administration.

“Official numbers don’t show the inflation that people see in their day to day life,” said Patrick Leary, chief market strategist and senior trader at Incapital.
“Most Americans spend a lot on housing, food, education and heath care,” he said. “They are all going up in price. That doesn’t feel deflationary to me,”
And Krosby is concerned that the Fed keeps stepping in to make sure interest rates don’t creep higher to keep the Wall Street party going. 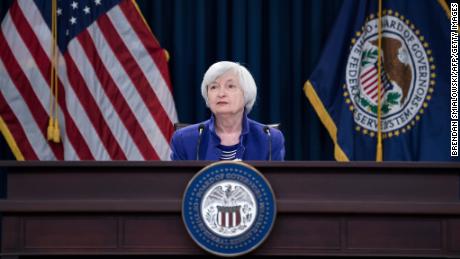 The 10-year Treasury bond has flirted with a 1% yield over the past few weeks, a potential sign that the economy is heating up. But the Fed’s bond buying has helped keep rates from rising significantly. That could backfire eventually.
“Investors need the bond market to function properly,” Krosby said. “What if inflation does start to creep higher? What is the Fed prepared to do then?”
That concern is fueling worries that the stock market may continue to surge — only to fall sharply once the Fed and Yellen start to signal that the economy is strong enough to be weaned off stimulus.

And it wouldn’t be the first time.
Wall Street threw a taper tantrum in 2013 when then Fed chair Ben Bernanke started to pull back on the Great Recession-era program of bond buying that was similarly put in place to keep interest rates low and stimulate the economy.
The hope this time around is that Powell has learned from the past, with some experts predicting he won’t do anything quick or drastic.
“We continue to see the Fed, along with every other developed market central bank, as highly accommodative,” Marvin Loh, senior global macro strategist at State Street, said in a report.
“To avoid a taper tantrum, Chair Powell has hinted that a change in the pace of asset purchases will be well communicated,” he added.
Others argue that it’s unwise to bet against the current market momentum. As long as the Fed and Treasury Department are in favor of more stimulus, the natural direction for stocks is to keep going up. Younger traders — the so-called Robinhood crowd — are unlikely to bail on the market just yet.
“Professionals and some others likely understand that this market is partially unanchored from reality, but the majority disagrees. This leads to strange dynamics,” Sebastien Galy, macro strategist at Nordea Asset Management, said in a report Wednesday. “What we can conclude is that the market may stay irrational longer than you can stay solvent.”
But it may not be that simple. The big worry is that as stocks keep climbing, the inflation pressures will build as people feel more confident about the economy.

Ultimately, the Fed may be forced to act more quickly than it would have liked in order to cool things down.
“Inflation can be transient until it sticks around. If you can charge more for goods and services and still see consumer demand, then why would you lower the price? That’s just logic,” Incapital’s Leary said. “The Fed can tolerate inflation creeping higher — but not exploding higher.”
Source: Read Full Article

Related News:
Business News:
Airlines & TSA boost security ahead of Inauguration
U.S. Rock Legend Inspiring Magnate’s Green Steel Revolution
Black Hawk Crash in New York Kills 3 National Guard Members
The future of renewable energy could look very different under Biden
Bitcoin has now replaced tech stocks as the most crowded trade, according to a BofA fund manager survey | Currency News | Financial and Business News
Recent Posts
This website uses cookies to improve your user experience and to provide you with advertisements that are relevant to your interests. By continuing to browse the site you are agreeing to our use of cookies.Ok