Westpac is homing in on share investments made by colourful soccer identity Bill Papas through an online trading platform amid fears the Forum Finance boss ploughed millions he allegedly defrauded from the bank into stocks.

Mr Papas is suspected of depositing at least $2 million of money he allegedly defrauded from Westpac into building a sizeable share portfolio held on an online trading platform, MacroVue. 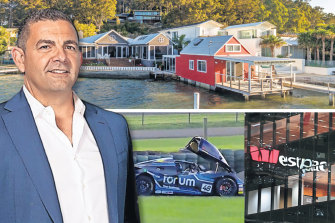 Mr Papas and his company Forum Finance have been accused by Westpac and two other lenders – Sumitomo and Societe Generale – of orchestrating a $400 million fraud on the lenders by forging the signatures of managers at large bank customers. The banks have brought civil proceedings in the Federal Court against Mr Papas, his former business partner and companies, while NSW Police is separately investigating reports from the lenders about the alleged fraud.

The Age and Herald can reveal the alleged fraudster drew down his share trading account on Macrovue by $1.5 million just days before the bank obtained freezing orders from the Federal Court over Mr Papas’ Australian assets.

A spokesman for Macrovue confirmed Mr Papas – whose full name is Basile Papadimitriou – was a customer of the trading platform. “I can confirm that Macrovue has received and complied with notifications provided via the court relating to orders made against Mr Papadimitriou, including responding to the subpoena,” the spokesman said.

“For privacy reasons and because this matter is before the courts we are unable to provide any details of client transactions.

“I can also confirm that Macrovue has suspended Mr Papadimitriou’s account and will keep it suspended, freezing the relevant assets until further court instructions are provided.”

MacroVue was born out of the AMP incubator and was sold to Sydney-based Halo Technologies in 2019. The platform allows investors to trade over 20,000 shares and ETFs across 23 exchanges including the ASX. It also has thematic share portfolios designed to cater to different investor tastes, such as ESG friendly investment options or particular subsets of technology stocks.

MacroVue is not the only group to be asked to hand over details of its dealings with Mr Papas or Forum. A host of other companies including major banks have been asked by Westpac and the other lenders to hand over information to help their investigations into where the money allegedly defrauded from the bank has ended up.

Westpac has also sought information from an entity operated by AltX, a Sydney-based investment house company that unknowingly arranged for its high net worth investors to fund property purchases by Mr Papas and his associate Vince Tesoriero using Westpac’s money.

Mr Tesoriero’s lawyers have previously told the Federal Court he resigned from being a Forum director two years ago and is cooperating with the liquidators’ investigations.

The Age and Herald first revealed in July that Mr Tesoriero and Mr Papas had amassed a $60 million property portfolio between 2018 and 2021 including luxury properties in Melbourne and Sydney as well as a portfolio of petrol stations located in tiny Victorian towns.

Sources close to AltX, who were not permitted to speak publicly, have previously told this masthead that all investors were paid out in full and the investments relating to Mr Papas and Mr Tesoriero and associates had been closed out.

Westpac has also sought more information from Melbourne company Aksara Holdings, which is owned by lawyer and businessman Konfir Kabo. The Age and Herald have previously revealed Mr Kabo, a successful commercial property investor with no prior business links to Mr Papas, agreed to sell a portfolio of petrol stations to the former Forum business partners. Mr Kabo via his company Aksara lodged caveats over the property when the duo failed to complete the transaction as per its legal rights.