London (CNN Business)Investors eying Europe for opportunities as it continues to recover from the Covid-19 pandemic have another reason to pump money in the region.

European Union leaders have agreed on a blockbuster stimulus deal following almost five days of fractious discussions in Brussels. The recovery plan, which will require the EU to tap financial markets for €750 billion ($858 billion), consists of €390 billion ($446 billion) in grants to struggling countries in the bloc. The rest of the money will be made available as loans. 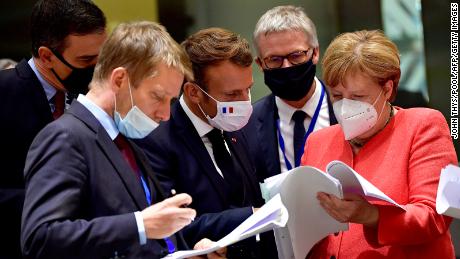 That’s lower than the €500 billion ($573 billion) in grants initially proposed by the European Commission. The headline figure was reduced to appease a group of fiscally conservative northern European nations — Austria, the Netherlands, Sweden and Denmark — known as the “Frugal Four.”

But the agreement is still a huge show of unity and a big step toward the kind of strong fiscal coordination investors have long clamored for.
“With the biggest-ever effort of cross-border solidarity, the EU is sending a strong signal of internal cohesion,” Holger Schmieding, chief economist at Berenberg Bank, told clients Tuesday. “Near-term, the confidence effect can matter even more than the money itself.”

Though a deal had been anticipated by markets, assets in the region moved higher on the news and could continue to rise in the coming months.
Benchmark stock indexes in Spain and Italy, which have been hit hard by the pandemic, both gained 2% in early trading before pulling back slightly, while the euro ticked up 0.1% to nearly $1.15. The currency has hit its highest level since early 2019 this week. The spread between 10-year Italian and German bonds also tightened as an agreement was reached.
Societe Generale strategist Kit Juckes thinks some investors may take profits on the euro in the near term. But he believes there could be a “more meaningful rally” starting in September in light of the agreement.
European stocks — which many investors have said are undervalued compared to their US peers — could get a boost, too.
Analysts have noted that while high-frequency data suggests the recovery has stalled in the United States, activity is still improving in Europe, which entered lockdown sooner. That means corporate earnings could be due for a faster recovery, especially with lots of stimulus cash now available.
Demand for European equity funds picked up for the week ending July 15, according to Goldman Sachs. The investment bank described the deal as “welcome, supporting our view that the European economy is well placed to recover from the Covid shock.”
“Given effective virus control, a strong rebound in the data and a favorable macro policy backdrop, we expect a steeper and smoother rebound in the Euro area than elsewhere, including the United States,” economists Alain Durré and Sven Jari Stehn told clients Tuesday.

Investors are also cheering the deal because it could lay the foundations for unprecedented cooperation between EU member states in the longer term, boosting growth in the region and easing concerns about high debt loads in individual countries like Italy.
The new agreement means the European Union will become a major borrower in global financial markets for the first time. It plans to repay the money by 2058.
“Today’s package breaks through the fortifications preventing a more federal EU to match, or sustain, the federal leap forward of the single currency two decades ago,” said Mujtaba Rahman, managing director of Europe at Eurasia Group.
It’s also seen as a good sign that Germany and France — the two largest economies in the bloc — worked closely together on the initial proposal.
Still, while the deal is due to bring Europe’s 27 member states close together, analysts have raised some concerns about implementation.

Funding won’t be available until 2021 and big chunks may not be disbursed until 2022, triggering fears it could come too late. Some experts also point out that the deal may not represent a permanent step towards closer economic and political integration. Dutch Prime Minister Mark Rutte on Tuesday called the agreement a “one off” and pointed out that its measures are “time limited.”
“We now have to see whether the recovery fund stands the test of time,” said Fabio Balboni, an economist at HSBC.
Source: Read Full Article