New York (CNN Business)Meet the new tech king of the Dow: Salesforce. The software company, which debuted in the Dow on Monday, is now the index’s third-largest holding.

Both Salesforce’s (CRM) inclusion and its high weighting might seem odd to investors at first blush.
It was chosen over two other trillion-dollar companies, Amazon (AMZN) and Google owner Alphabet (GOOGL), and it’s an even bigger part of the Dow than more established Dow tech stalwarts Microsoft (MSFT), IBM (IBM), Apple (AAPL), Cisco (CSCO) and Intel (INTC). Salesforce’s market value is $240 billion, compared to Apple’s more than $2 trillion and Microsoft’s $1.7 trillion.

It’s all because the Dow, unlike the S&P 500 and many other indexes, ranks its holdings by share price and not market value.
It’s been this way since Charles Dow first founded a predecessor to the modern Dow Jones Industrial Average in 1885 — when there were only 12 stocks in it instead of 30 and prices mattered more than market value.

Salesforce is one of three new Dow companies joining the index on Monday, along with biotech Amgen (AMGN) and industrial conglomerate Honeywell (HON).
“In our view, the shuffle highlights the importance of diversification in ensuring that investors are well exposed to the winners in a post-Covid-19 world,” said Mark Haefele, chief investment officer with UBS Global Wealth Management, in a report Monday.
The Dow’s top holdings aren’t members of the FAANG crowd — which makes it a less relevant barometer of the 2020 digital economy. That’s one of the big reasons why the Dow is flat for the year, trailing gains for the S&P 500 and Nasdaq and other top investments in 2020 that have made a notable comeback since March. 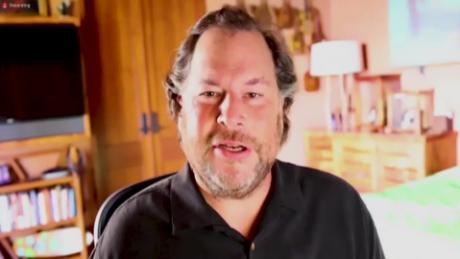 Salesforce CEO: People should be fined for not wearing a mask

Apple, which just completed a stock split to lower its stock price, was the previous top-weighted component in the Dow. But now that shares trade for just $128, Apple has gone from being the biggest Dow weighting all the way down to only 17th largest, slightly ahead of IBM and just behind Disney (DIS).
And since Amazon and Alphabet both have stock prices in the quadruple digits, there is no way they could have been added to the Dow unless they too split their stocks. Otherwise, they would make up an outsized percentage of the Dow’s weighting.
A spokesman for S&P Dow Jones Indices told CNN Business that potential Dow replacements also need to “command a reasonable weight based on its stock price.”
That consideration is probably the main reason why two other tech titans, chip leader Nvidia (NVDA) and software company Adobe (ADBE), also are being kept out of the Dow — even though both are worth more than Salesforce. Each stock trades for more than $500 a share.
The spokesman added that any time changes are made to the Dow, “many factors are considered including trying to represent the broad swath of sectors and sub industry groups” among larger stocks.

Why Salesforce made more sense to add than Facebook

But Howard Silverblatt, senior index analyst for S&P Dow Jones Indices, noted the addition of Salesforce will allow the Dow to maintain a nearly 25% weighting to pure tech stocks. 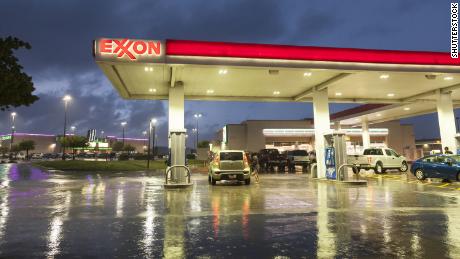 “The marketplace is always changing, and market barometers need to change with it,” Silverblatt wrote in a blog post. “Each of the changes reflects the environmental changes of the economy and is not intended as a buy-sell indicator, but as a ‘that’s the way it is’ reflection of the market.”
That all makes sense. But if the Dow is supposed to reflect the market, investors might wonder: Then why not add Facebook (FB)? The social media giant has a stock price of just under $300 — only slightly higher than Salesforce. So adding Facebook (and its $835 billion market value) might seem more logical.

But what most ordinary investors consider to be tech companies are viewed as “communications services” firms by the folks who manage the Dow. That includes Facebook.
Although Facebook (warts and all) may be a more relevant part of the US economy, adding it to the Dow would arguably give the Dow too much exposure to “communications” as the index already has Verizon (VZ) and Disney representing that sector.
Source: Read Full Article