The recent direction of the U.S. dollar points to former Vice President Joe Biden defeating President Trump in the upcoming election, but a lot can change before Nov. 3.

The U.S. Dollar Index, which tracks the dollar against a basket of its peers, has climbed 0.9% since its July 31 close.

A weaker dollar in the three months ahead of the election typically favors the incumbent party while a stronger dollar has been good news for the challenging party. The index has correctly predicted seven of the last eight election winners when using that measure, according to Ryan Detrick, chief market strategist at LPL Financial.

“As we saw back in March, when trouble hits, the U.S. dollar tends to do well, as investors flock to the safety of the world’s reserve currency,” Detrick wrote. “When things are calm, the dollar tends to weaken, which favors riskier assets.”

The U.S. Dollar Index surged by 10% from March 9 through March 20 amid a global shortage as governments ordered lockdowns to slow the spread of COVID-19. The index has since fallen 8.2% as the global economy has begun to slowly emerge from its sharpest downturn of the post-World War II era. 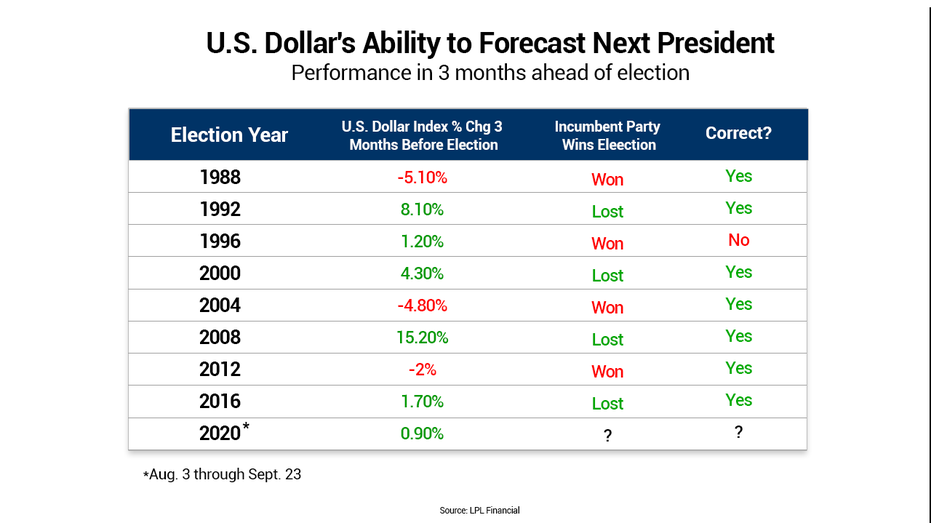 But the dollar has climbed 2.65% in September amid a loss of economic momentum, stalled stimulus talks, a new surge of COVID-19 infections in Europe and heightened U.S.-China tensions, and on Thursday broke above resistance at 94.40.

That breakout opens the door for further near-term strength and a “move toward 96.00,” according to Marc Chandler, chief market strategist at Bannockburn Global Forex.

Further strength in the greenback would seem to be signaling bad news for Trump, based on LPL’s analysis.

While the U.S. Dollar Index’s performance is just one measure of how the election might go, another market signal is also moving against the president.

A similar indicator shows stock market gains in the three months ahead of the election have typically indicated a win for the incumbent's party, while declines suggested a change in control.

That indicator has since 1984 been a perfect nine for nine in picking the president, and has correctly forecast 87% of all presidential elections, according to LPL Financial.

With more than five weeks to go until the election, there is still time for both measures to swing in Trump’s favor.