Could the coronavirus spell the end of the "European Project?”

In the aftermath of the global financial crisis the tensions between the vision of a more integrated Europe – a United States of Europe – and the reality of quite disparate economies and culture were stark.

Indeed, with "Grexit" and "Quitaly,” where both Greece and Italy teetered on the verge of quitting the eurozone, the project nearly fell apart.

The coronavirus is generating similar stresses. As with the GFC the pandemic has impacted the southern European countries far more than the northern states in the common currency union and, as was the case a decade or so ago, the Italians and Spaniards and their neighbouring states have far less fiscal flexibility to respond to it than countries such as Germany, the Netherlands and Austria. 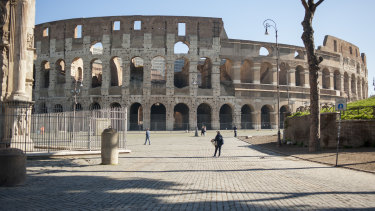 As with the global financial crisis, the coronavirus has impacted sourthern Europe far more than the northern states.Credit:Bloomberg

Not surprisingly, therefore, southern Europe is pleading for help while the northern economies are only prepared to extend it with strings attached. For the second time in just over a decade the structural flaws in the eurozone and in the vision of a more deeply integrated Europe are being exposed.

Those flaws are encapsulated in the debate about coronabonds.

It’s not a new debate, just a rebadged one. In the wake of the GFC the same concept of the joint issuance of debt on behalf of all eurozone members was raised and squashed. Then the bonds were labelled “eurobonds".

In concept eurobonds might appear simple and compelling. Countries with a common currency would use a central agency to issue debt on behalf of all the 19 members of the eurozone, lowering the cost of debt for the weaker economies and in the process creating a much deeper and more liquid bond market, similar in size and nature to the US Treasury bond market.

The problem with that concept, however, is that the only thing the southern economies have in common with those in the north of Europe is their currency. Culturally and fiscally the Italians and Spaniards are very different to the Germans and Dutch.

There is also a fundamental structural barrier to mutualising the debt of the eurozone economies. The eurozone was created to help facilitate a European free-trade zone, as was the Schengen agreement that allowed borderless travel throughout the European Union.

It was never envisaged – and indeed was explicitly excluded from the EU’s charter – that the sovereignty of the member states would be compromised. Fiscal transfers – financial aid from one member state to another – were explicitly prohibited by the Maastricht Treaty in 1992 which created the EU.

There are some measures that were put in place in response to the GFC, such as the European Stability Mechanism, that would enable distressed economies to receive assistance, but they come with such harsh conditions attached (as Greece and Italy discovered) that they produce austerity and social distress.

At the heart of the differences over the issuance of coronabonds is a fear in the northern economies, noted for their financial discipline and, indeed, frugality, that they will effectively be subsidising (from the northerners’ perspective) their indolent, ill-disciplined and profligate southern European counterparts and relinquishing some elements of sovereignty in the process.

That’s why, while nine members of the eurozone, including France, have called for the creation of coronabonds the other 10, led by Germany and the Netherlands, have rejected that call. It’s also why the barriers to the completion of the European Project are so dense. 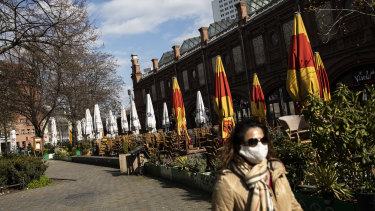 The northern European countries such as Germany are resisting calls to help out their southern counterparts.Credit:Getty

If Europe were to become the United States of Europe, it would need far more than a single currency and a free travel zone (or at least one that was borderless before the pandemic developed). It would need proper banking and fiscal unions, with a federal government responsible for the sovereign layer of debts.

The northern states don’t want that loss of sovereignty and the dilution of their economic superiority. They also worry about moral hazard – that a tighter union or even just the issuance of common debt instrument such as eurobonds or coronabonds would encourage the southern economies to be even more profligate and ill-disciplined because they would be bailed out and their debts pooled with and socialised by the northern economies.

Germany and the Netherlands and the other stronger economies in the eurozone do, of course, benefit from the inclusion of the weaker southern economies within the eurozone.

The presence of those more indebted and feeble economies produces a currency weaker than if, for instance, Germany was still issuing deutschmarks. German exports are significantly more competitive than they would otherwise be and its trade with the rest of the eurozone larger than it might otherwise be.

Spain and Italy and the rest of southern Europe, already heavily leveraged and with weak economic growth, have been hit harder by the pandemic than Germany, both in lives affected and lost and in economies heavily exposed to tourism. They will emerge far weaker from the experience than those economies to their north.

The nine members of the eurozone promoting coronabonds, including France (President Emmanuel Macron is a strong advocate for deeper European integration), could go it alone and create a southern European bond of their own. They are actively contemplating that option.

That might marginally lower the cost of debt but that’s about it. It would also take considerable time to put in place the agreements to underpin any issue – there are estimates that it would take several years, at least, to develop the legal framework for an issue of coronabonds.

If the southern Europeans feel they have been abandoned by their wealthier neighbours in a period of quite horrible distress they will again question the benefits of remaining within the eurozone, revisiting the debates around Grexit and Quitaly.

If they were to exit the eurozone, their currencies would depreciate considerably, creating more competitive economies (albeit while probably have to service euro-denominated and inflated debt) while those remaining within a diminished currency union would see the euro strengthen considerably and their competitiveness weakened.

Exits are unlikely. There’s ego – the euro brings prestige and geopolitical clout – to the European leaders and agencies and it would be a messy and costly business trying to extract an economy from the eurozone; messier than it was for the British, with their own currency, to exit the EU.

The ambition of the far deeper engagement by the promoters of the European Project, however, is going to be lost in the acrimony and finger-pointing occurring as the pleas for fiscal help in southern Europe are rejected by the north.