London (CNN Business)Wall Street was already on edge heading into the US election, fearful that a contested result could trigger weeks of uncertainty and a potential constitutional crisis. President Donald Trump’s Covid-19 diagnosis injects even more unease at a crucial moment.

What’s happening: US stock futures plummeted after Trump tweeted that both he and the First Lady tested positive for the coronavirus, an extraordinary development that threatens to plunge his re-election campaign into disarray and raises questions over the leadership of the world’s biggest economy.
The diagnosis is the most serious known health threat to a sitting American president in decades.

“To say this could potentially be a big deal is an understatement,” said Rabobank strategist Michael Every.
As the president begins quarantining in the White House, investors have more questions than answers. The VIX, which tracks expectations of US stock market volatility, jumped 8% Friday as traders digested the news.

Here’s what investors want to know:
How sick is the president?
This is a live concern. The First Lady tweeted that she and her husband were “feeling good,” but it’s not clear what symptoms, if any, Trump is experiencing.
Trump aide Hope Hicks also tested positive. That raises questions about how many top government officials could be incapacitated by the virus. Joe Biden also shared a stage with Trump for the debate on Tuesday.
Oanda market analyst Jeffrey Halley said administration officials and senior Republicans may have been exposed.
“Many, if not all, are in a high-risk group,” he said. If it turns out that numerous officials are sick, investors could double down on defensive trades.
Will Trump call for an election delay?
Trump’s recent efforts to preemptively paint the election result as illegitimate have rattled Wall Street and raised concerns that he won’t concede even if he loses. That could lead to a long period of uncertainty, which investors hate.
Anxiety has now increased substantially. Traders are worried that Trump, who has had to cancel campaign events, could call for the election to be pushed back, or use his diagnosis to cast doubt on the outcome.
Trump previously floated the idea of delaying the November election, but does not have the authority to do so. The Constitution gives Congress the power to set the date for voting.
What’s the read from voters?
According to betting markets, the news is a big positive for Biden, whose odds of winning jumped on Friday. But it’s not clear how voters will digest the news over time.
Will this affect stimulus talks?
Democrats and Republicans failed to make much progress on a deal in recent days. However, conversations had been ongoing, with the White House taking a leadership role. If Trump’s diagnosis impedes further discussions, it could send stocks lower.
Investor insight: Wall Street isn’t in full-blown panic mode, but the apprehension is obvious Friday as traders ramp up selling. The Japanese yen, a traditional safe haven investment, strengthened on Friday, while the US dollar fell back. Oil prices dropped sharply.
“By now we understand that this virus affects most people mildly and a small minority very severely,” Societe Generale strategist Kit Juckes told clients Friday morning. Still, he said, bets to hedge against uncertainty in the days following the election are certain to get more expensive.

The last jobs report before the US election

The last US jobs report before the November election posts Friday. What it reveals could have ramifications both for the presidential race and stimulus talks, which on Thursday appeared to be at an impasse. 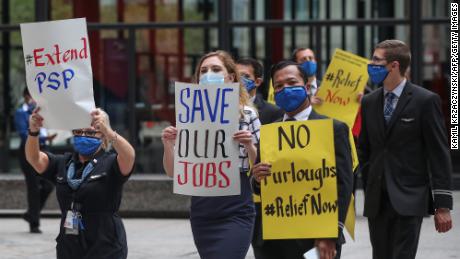 The forecast: Economists polled by Refinitiv predict the US economy added 850,000 jobs in September, a slowdown from the 1.4 million positions added in August and the millions more jobs created over the summer. That would push the unemployment rate down to 8.2%.
Need to know: Even though joblessness has dropped significantly since April, when the unemployment rate peaked at 14.7%, it would still be the highest unemployment rate ever heading into an election, per records dating back to World War II.
Alarm about the unemployment situation has risen in recent days after a flurry of corporations announced job cuts, including Disney, Shell and Goldman Sachs.
American Airlines and United Airlines started laying off tens of thousands of workers on Thursday after lawmakers failed to reach an agreement for additional aid for the aviation industry.
Big caveat: These job cuts will not be reflected in the report released on Friday, which is based on a surveys conducted in the middle of the month.
The faltering job market adds to pressure on Congress to reach an agreement for more assistance. But ongoing talks between House Speaker Nancy Pelosi and Treasury Secretary Steven Mnuchin showed few signs of bearing fruit before the president became infected with Covid-19.

Related News:
Business News:
The Long And Short Of Pfizer-BioNTech, Moderna, Sputnik V & Oxford-AstraZeneca Vaccines
INSURTECH DISRUPTORS: Here's exactly what full-stack insurtechs are doing to beat incumbents on customer acquisition, personalization, and claims processing
Disney increases layoffs to 32,000 workers as coronavirus batters its theme park business
APVO Gets Buyout Offer, PFE/BNTX’ COVID Shot 95% Effective, CORT Gets Favorable PTAB Ruling
Now through November 30, you can save up to 60% on identity-protection plans from Identity Guard®
Recent Posts
This website uses cookies to improve your user experience and to provide you with advertisements that are relevant to your interests. By continuing to browse the site you are agreeing to our use of cookies.Ok