A few years ago, as American consumers were being wooed with “Buy Now, Pay Later” loans that let them pay for online purchases — from makeup to Peloton bikes — in small increments, one startup had an idea: Why not adapt the model to sell outdoor recreation gear, including guns? 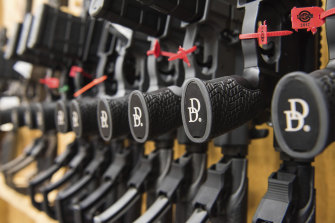 Credova has drawn fresh attention because it offers financing plans to customers of Daniel Defense, the manufacturer of the gun used by the Uvalde, Texas, school shooter.Credit:AP

Founded in 2018, the Bozeman, Montana, company positioned itself as a provider of easy online payment plans to customers of hunting, fishing and camping supplies. But Credova also saw an opportunity to focus on the gun industry, because most of the big “Buy Now, Pay Later” companies don’t finance purchases of weapons. Credova has since partnered with dozens of online gun merchants to offer customers financing options that make buying a gun — which generally cost anywhere from $US200 to $US900 — more affordable.

Credova’s profile in the gun industry is rising. It has partnered with the National Rifle Association on at least two occasions, including sponsoring a luncheon at the association’s annual meeting in 2019.

More recently, Credova drew attention because it offers financing plans to customers of Daniel Defense, the manufacturer of the gun used by the Uvalde, Texas, school shooter. Credova told Bloomberg it did not finance the shooter’s purchase of firearms. Investigators said the shooter bought the guns with a bank debit card.

Credova “plays a very small role in the legal firearm purchase ecosystem by representing less than one-tenth of 1 percent of financing firearm purchases,” Elizabeth Locke, a lawyer retained by Credova, said in an emailed statement. Most gun purchases are made with credit cards, Locke said. She added that it would be misleading to describe Credova as focused on gun buyers. (Locke represented Sarah Palin in her libel lawsuit against The New York Times.)

The company declined to make its chief executive, Dusty Wunderlich, available for an interview.

The gun market, especially the ways in which people buy and sell weapons, has come under fresh scrutiny as the nation grapples with a spate of mass shootings. Congress is poised to pass a bipartisan deal on a modest set of gun safety measures, including enhanced background checks for some prospective gun buyers under the age of 21.

Online gun sales fueled by extreme advertising and social media have been growing, and Credova and other gun-financing companies are part of that broader ecosystem, said Adam Skaggs, chief counsel and policy director for Giffords Law Centre, an advocacy group for the prevention of gun violence that is backed by former Rep. Gabrielle Giffords, a victim of gun violence herself.

“Buy Now, Pay Later” financing can make guns more accessible for people without credit cards, Skaggs said. “Maybe some prefer this because they don’t have to go to the trouble of getting a credit card.”

Buying firearms on instalment plans isn’t new for the gun industry, just as layaway plans have long existed for all kinds of customers. But as gun sales have moved online, the “Buy Now, Pay Later” model — which is generally targeted to young shoppers who typically don’t have much disposable income or credit cards — has become a way to attract a new generation of customers.

Although online sales are a small fraction of the $US15 billion gun market, according to IBISWorld, an market research firm, they have been growing. IBISWorld expects online gun sales to reach $US2.6 billion by 2026, up from $US532 million in 2012.

“Credova got into the gun financing business not just because of the layaway culture in gun retail, but because so many guns are being purchased online,” said Mike Weisser, a longtime gun seller in Massachusetts who became a consultant to gun control organisations and writes a blog on ways to reduce gun violence.

Of course, buying firearms and ammunition online is more complicated than a typical Amazon purchase, since they cannot be shipped to a person’s home but must be picked up from a licensed gun retailer after the buyer has passed a standard background check. Credova and other gun financiers are not involved with those background checks; they perform only standard credit checks before extending financing to buyers. Credova says on its website that approval takes “seconds” for most customers.

Retailers like the “buy now, pay later” option because it draws more customers. Customers like it because it’s relatively easy to apply, requiring only a simple credit check. The loans are interest-free and can be paid back in three or four monthly instalments. The financing companies make their money by charging retailers a fee for the service. Some companies also charge customers fees and interest if they miss payments.

Even though “buy now, pay later″⁣ financing has blossomed in the United States, many of the biggest companies, including Affirm, Klarna, Afterpay, PayPal and Zip, explicitly bar gun and ammunition purchases, creating the business opportunity for Credova and other niche firms.

Gearfire Capital, an online financing company, started in January with the motto “Gear up, Pay Later.” Global Check Services offers online gun financing through its ARC90 program. Sezzle, another company that is about to be acquired by Zip, permits gun purchases, but gun sales are a small part of its business, a Sezzle spokeswoman said.

But Credova’s website suggests that guns are a big part of its business. Of the roughly 100 retail partners listed on its website, 60 are online gun and hunting supply retailers, according to a New York Times tally conducted on June 22. Gun merchants feature prominently on its site. And it is currently running a sweepstakes in partnership with the US Concealed Carry Association, a gun rights organisation, in which the winner can get $US15,000 toward the purchase of ammunition or guns.

Two years ago, Credova was one of six companies that partnered with the lobbying arm of the NRA to raise $US1 million to defend the Second Amendment. In 2019, it sponsored a corporate executives’ luncheon at the NRA’s annual meeting, according to a news release, which also said that Credova is owned by steadfast supporters of gun rights who are “determined to provide financing options for firearm and sporting goods consumers.” 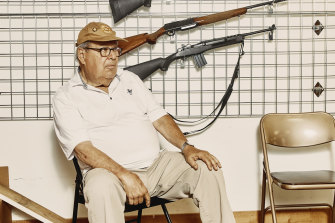 “Credova got into the gun financing business not just because of the layaway culture in gun retail, but because so many guns are being purchased online,” said Mike Weisser, a longtime gun seller in Massachusetts.Credit:Simon Simard/The New York Times

Credova’s app, which debuted in August 2020, has been downloaded just 19,000 times, according to Sensor Tower, a mobile app tracking firm. By comparison, the biggest “Buy Now, Pay Later” firms have had their apps downloaded millions of times.

The availability of easy financing options for weapons raises the possibility of abuse, said Skaggs of the Giffords centre. One potential concern is whether no-interest instalment financing can be used by people looking to quickly resell a gun for a profit without first putting a lot of money down, he said.

Not all Credova’s customers are happy with the company’s business practices, according to court filings and reviews and complaints submitted to the Better Business Bureau. In particular, some customers complained about its one-year instalment plan, under which customers can end up paying much more than the list price for a gun if the borrowed amount is not repaid within a 90-day, interest-free period.

Matthew Sheffield of Selma, Alabama, used Credova two years ago to pay for a $US400 box of ammunition he had ordered online. Sheffield said he planned to pay for the purchase within the 90-day no interest period but was unable to do so. As a result, he said, Credova told him he would have to comply with the more costly instalment contract.

Sheffield, who works as a welding inspector, said he doesn’t plan to use the service again.

In an email, Locke said that had Sheffield paid the purchase balance “within the 90-day window, he would have not needed to incur any additional charges or fees.”

On June 15, Credova announced that it would phase out the 90-day interest-free payment window and replace it with a new plan that permits shoppers to pay for their purchases “in four payments, every two weeks, with no interest, at select merchants.”

Locke said less than 1 per cent of Credova’s customers have complained about its services.