The fissures in China’s property markets first surfaced publicly a year ago when it became apparent that China Evergrande was struggling to meet payments to suppliers and other creditors. A year on and it is apparent that the world’s most indebted property developer remains essentially brain-dead and on life support and that the property crisis it ignited is spreading and deepening.

Late Friday in Hong Kong Evergrande provided an update on the progress of its efforts to develop a plan for restructuring its debt. It had a self-imposed deadline of the end of July to deliver the plan but, from Friday’s announcement, it appears there has been little progress. 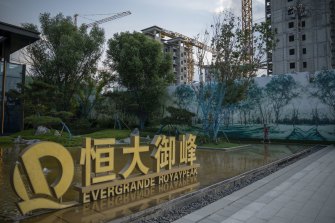 Instead of the plan it unveiled “preliminary restructuring principles”, saying it might offer some assets outside China to offshore dollar bond creditors owed about $US23 billion ($33 billion).

Those assets might include shares in its electric vehicle and property management services businesses, either as “supplement credit enhancement” to support a conversion of existing debt into new bonds or perhaps as equity-for-debt swaps.

Evergrande defaulted on more than $US1 billion of those offshore debts late last year and foreign bondholders, with their bonds trading at about eight cents in the dollar, are pessimistic of their chances of recovering anything meaningful from an eventual restructuring and, despite Evergrande’s assurances, cynical about their likely treatment relative to China’s onshore lenders.

In the announcement to the Hong Kong Stock Exchange the group also said it was making its “best effort” to resume work and construction and had partially or completely resumed construction on 96 per cent of its pre-sold and undelivered projects.

Given the pre-sales model pursued by developers in China – apartment buyers pay for the properties before construction starts – that activity will drain rather than generate cash.

Evergrande also said it had achieved contracted sales of properties of RMB12.26 billion ($2.6 billion) in the first half of 2022. In the same half a year ago it sold RMB356.8 billion of properties.

What was once a river of cash has turned into a trickle as the property crisis Evergrande helped trigger has scared off buyers, with the revolt by mortgagors – sparked in June by buyers of an uncompleted Evergrande project – exacerbating the already crushing pressure on developers.

The mortgagors are refusing to service the bank loans they took on to buy their apartments and the protest movement that started with the Evergrande development has now spread to about 320 projects across China and caused the central authorities to set up a $64 billion fund to help developers complete their unfinished projects. 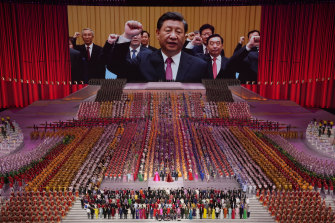 If Xi Jinping wants a smooth path to the unprecedented extension of his leadership of the Communist Party to a third term, however, Beijing might have to get more directly and aggressively involved in the crisis.Credit:AP

Worryingly for the authorities and China’s banks, unpaid suppliers to Evergrande projects are also starting their own repayment strike which, if it were to spread as the mortgagors’ actions have spread, would amplify the financial and economic effects.

Evergrande’s plight, already appearing hopeless, seems to worsen every time it provides an update.
Last month its chief executive and chief financial officer were forced to resign after an investigation of the circumstances in which about $US2 billion of deposits within an Evergrande subsidiary were used as security for borrowings by third parties. That $US2 billion appears to have been seized by the third parties’ banks.

On Sunday, Evergrande said one of its subsidiaries had been ordered to pay a guarantor of the borrowings of some Evergrande entities about $US1 billion for failing to honour its financial obligations. The subsidiary had pledged a shareholding in Shengjing Bank it owed as security, which will now be sold and the proceeds taken by the guarantor.

As Evergrande’s woes became apparent last year as it struggled to conform to Beijing’s “three red lines” policy (essentially leverage limits) it spread contagion throughout the property sector and, with property activity accounting for about a third of China’s economy, throughout the economy.

Chinese developers – about 30 of the top 100 developers – have defaulted on about $US20 billion of offshore debts so far. Developments have been frozen, either incomplete or not even started and income from pre-sales has dried up.

On Friday data on home sales by the top 100 developers was released that showed sales fell almost 40 per cent in July relative to the same month a year earlier and were almost 29 per cent lower than in June this year.

The mortgage boycotts, the sheer number of developments that have been frozen incomplete and the impact of China’s harsh “zero COVID” policies on prospective borrowers’ incomes have gutted activity levels in the sector.

The combination of COVID lockdowns and the implosion in property sector activity were major negative influences on China’s meagre 0.4 per cent GDP growth rate in the June quarter.

What was once a river of cash has turned into a trickle as the property crisis Evergrande helped trigger has scared off buyers, with the revolt by mortgagors exacerbating the already crushing pressure on developers.

So far the chaos in the sector hasn’t had any visibly material impact on China’s banks, which have reported less than $500 million of mortgage delinquencies.

Estimates by credit ratings agencies and investment banks, however, suggest that they could experience roughly $500 billion of mortgage-related losses if the property market’s worst-case scenario were to unfold.

The authorities have yet to unveil their own plan for stabilising the industry, leaving that responsibility largely to local governments that are themselves being impacted by the liquidity crisis in the sector. Local governments rely on sales of land to developers for nearly a third of their own income.

To stabilise the sector before the accelerating drainage of liquidity destroys the sector the big developers have themselves to be either stabilised or liquidated in an orderly fashion that doesn’t create a deeper and broader financial crisis.

Given the nature of China’s political system and the authorities’ control over every aspect of the economy, that’s possible despite the apparent tardiness in recognising and responding to the scale of the problems.

If Xi Jinping wants a smooth path to the unprecedented extension of his leadership of the Communist Party to a third term, however, Beijing might have to get more directly and aggressively involved before the nation’s foundations of social and economic stability, already shuddering, become even wobblier.