One of the biggest risks banks face when it comes to cryptocurrencies is being left out of the market altogether.

That’s the view from Commonwealth Bank of Australia Chief Executive Officer Matt Comyn, who says although the digital assets are “very volatile and speculative”, banks need to be involved in the adoption of technology underpinning crypto and the insatiable demand from customers to trade them. 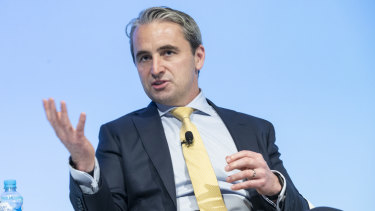 While viewing crypto as “very volatile and speculative”, CBA boss Matt Comyn says the sector is here to stay.Credit:Louie Douvis

The country’s largest bank said on Friday it’s bought a small stake in cryptocurrency exchange Gemini Trust. The exchange, founded by Tyler and Cameron Winklevoss, was seeking funding at a $US7 billion ($9.6 billion) valuation. The bank is also partnering with Gemini to give its customers safe storage for tokens they buy and sell.

Concerns abound about the potential dangers as regulators around the world grapple with rules and frameworks for the still nascent industry. Banks from JPMorgan in the US to DBS Group in Singapore are among those hiring for jobs, a hunt for skilled talent that Comyn says is scarce.

“It’s important to say we don’t have a view on the asset class itself — we see it as a very volatile and speculative asset,” said Comyn. “But we also don’t think that the sector and the technology is going away anytime soon. So we want to understand it, we want to provide a competitive offering to customers with the right disclosures around risks.”

Spectacular gains from digital assets in recent years and a greater interest from investors has brought with it more discussions on the relative merits of central-bank digital currencies.

The Reserve Bank on Thursday said it’s yet to be convinced one is needed in Australia.

“Many central banks are looking at the applicability of a central-bank digital currency, what would that look like, what would the benefits be of that,” Comyn said in the interview.

“Again, that’s something we’d like to participate in. We think it’s important that Australia is building capability and piloting different versions of the future. We are hopeful we can play a role in that.”

Below are some other comments Comyn made:

“There is a big divide between what the market is expecting and how that translates into wages, and into strong demand for labour next year, versus what the central bank is currently forecasting. Our view is there’s going to be strong economic growth in 2022, a very low unemployment rate, some of those supply chain issues will persist, and we will see some higher inflation certainly than we’ve seen for many years.”

“They are a very important trading partner — everyone realises that. But, again, it’s a very complex situation.

“It’s been challenging, but we also have to look at the broader implications of the relationship over the long term. Of course everyone would like there to be great alignment and there to be mutually beneficial, but there are also important issues at play which need to be managed appropriately by the government.”