The big four bank chiefs have welcomed the federal government’s revamped small business loan scheme, claiming it will provide a lifeline to the hardest hit industries once JobKeeper payments are cut off.

The government significantly expanded its loan scheme for small to medium sized businesses on Thursday, increasing the size of eligible loans from $1 million to $5 million and raising the turnover threshold from $50 million to $250 million.

The loans are available to around 350,000 businesses and will be 80 per cent backed by the government, compared to the 50 per cent backing under the last iteration that saw little take up. 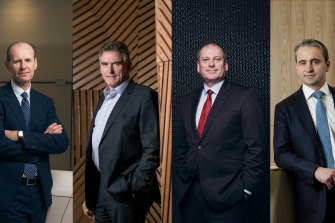 National Australia Bank chief executive Ross McEwan said the package would be particularly useful for businesses that were healthy before the pandemic but have struggled through the lockdowns.

“With the phasing out of JobKeeper, this is a really comprehensive loan package for those industries that continue to be hit hard by COVID-19,” Mr McEwan said.

“We are pleased to see specific support for the aviation and tourism industries, given the particularly heavy load these businesses and their many employees have borne over the past year.”

The first iteration of the government’s loan scheme was launched in March, offering credit of up to $250,000 for five year terms. However, only $2 billion from the available $40 billion was used in the first six months as businesses were cautious about taking on debt during COVID-19.

“Once JobKeeper ends, we will probably see a bit more of the take up. It kind of depends how willing business are to back themselves, invest and wait for a return to more normal economic conditions,” he said.

“While many sectors of the economy are now benefitting from the strong recovery, it is important that we continue to support those businesses who have yet to get back on their feet,” he said.

ANZ’s Shayne Elliott similarly welcomed the scheme, claiming it would provide a “critical boost” to sectors “hardest hit by impact of COVID-19″.

“The government’s decisive intervention throughout the pandemic has resulted in a faster economic recovery than otherwise would have been possible with Australian businesses and households in much better shape as a result,” Mr Elliott said.

Meanwhile, Westpac’s Peter King said the loan scheme would help businesses “recover and grow”, adding he was proud to take the “next step” in the collaboration between industry and government.

”While many of our customers are back on track, some sectors and geographies remain under pressure. For those customers, the new scheme will provide targeted support and it also helps provide a funding bridge to give businesses more time to recover,” he said.

Financial Counselling chief executive Fiona Guthrie has also welcomed the scheme, saying it was preferable small businesses were incentivised to take loans from banks instead of dealing with smaller lenders.

“The predatory practices are more in the fintech lenders,” Ms Guthrie said. “This scheme is for banks, which generally we welcome.”