For now, though, the coast seems to be clear for stocks, according to Jordan Kahn, the chief investment officer at ACM Funds and co-manager of the ACM Dynamic Opportunity fund, which takes a long-short approach somewhat in the fashion of a hedge fund.

In addition to the gargantuan stimulus package that will be supportive of consumer spending, equity investors can rely on the fact that the global recovery is still in its early stages, interest rates remain low, and the Federal Reserve is committed to quantitative easing, Kahn told Insider on Wednesday.

He said he thinks it will take several rate hikes from the Federal Reserve before stocks are hurt. As of now, it appears that the Fed will keep the federal funds rate near zero at least into 2022, if not longer.

Kahn also believes that while 10-year Treasury yields will eventually continue rising towards 2% by the end of the year as economic activity ramps up, stocks will be able to stomach the move because it won’t be as sharp of a jump as it was in recent weeks. He also said he thinks yields are done moving in the near-term.

But don’t mistake all of that to mean Kahn is bullish on the mega-cap tech stocks that have led the market over the last several years.

While he thinks they still may have some upside, he said investors will find the best opportunities in more cyclical trades.

It’s a new paradigm for Kahn.

“This is a really interesting juncture. For years if you would have asked me that question I would have said we run on extremes on a daily basis, we try to pick up on leadership in the market, and for most of that time, our screens have been picking up on these big growth leaders that have been doing so well in the market,” Kahn said when asked about his outlook on the market and where he sees opportunities.

“Now we’re just starting to see that sort of leadership breaking down and more cyclical names start coming through to our screen,” he added.

Kahn said he and his team look for stocks that will rise at least 30-50% in a 6-18-month period. We asked him what some of his favorite names are as the economy prepares to reopen.

Kahn listed four stocks he thinks fit this minimum 30-50% upside requirement for the couple of years ahead. One is Westlake Chemical (WLK), a maker of products that are used in pipes, medical devices, and more. He said its earnings revisions this year and current valuation make it attractive, as well as how much it’s tied to economic performance. 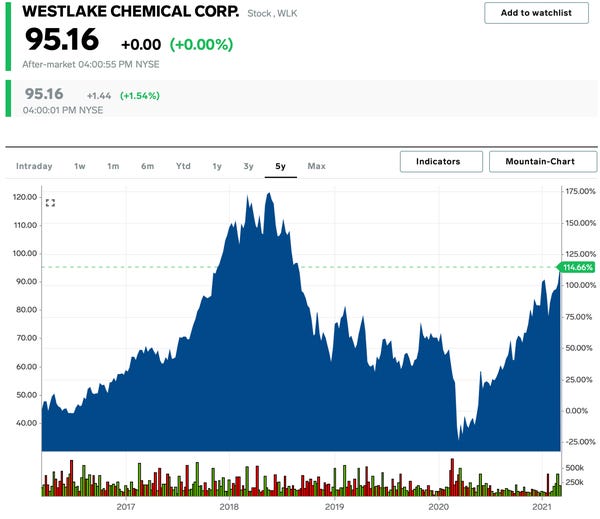 “Looking at the earnings revisions just this year, they’ve been revised higher by about 72%,” he said. “The stock trades at about 17 times earnings for an expected growth rate of almost double than that over the next 3-5 years.”

Kahn also likes EOG Resources (EOG), an energy company. He said the stable outlook for oil prices in the months ahead amid heightened economic activity bode well for the firm, as well as its still-depressed share price from 2018 levels. 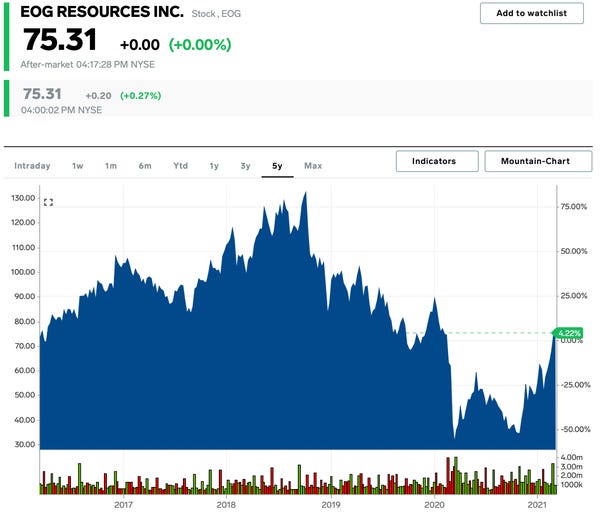 But Kahn also listed two stocks he thinks could rise as much as 100% going forward. The first is fertilizer producer Mosaic (MOS), as people become more willing to spend money on things like gardening with the recovering economy. 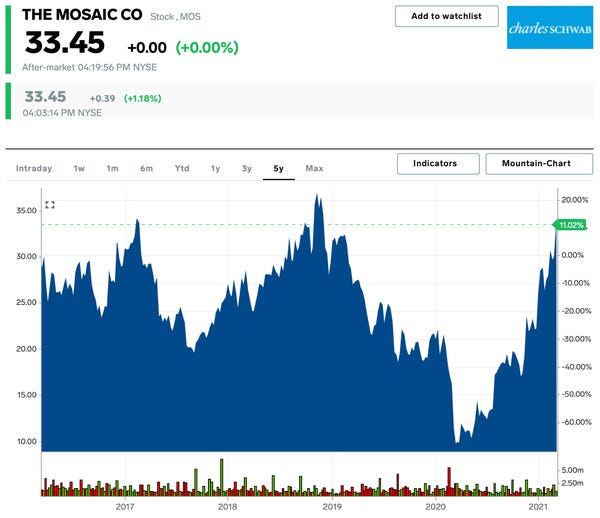 He said its beaten down valuation makes it a strong opportunity.

“Just this year, just in the last three months, when we look at earnings revisions,” he said, “earnings have been revised upward by over 100%. So the stock is trading at 12 times estimates. Estimates are still not near their peak where they were back in 2015.”

The second is the financial firm Rocket Mortgage (RKT). The financial sector is consensus as one of the most attractive sectors in the market right now. 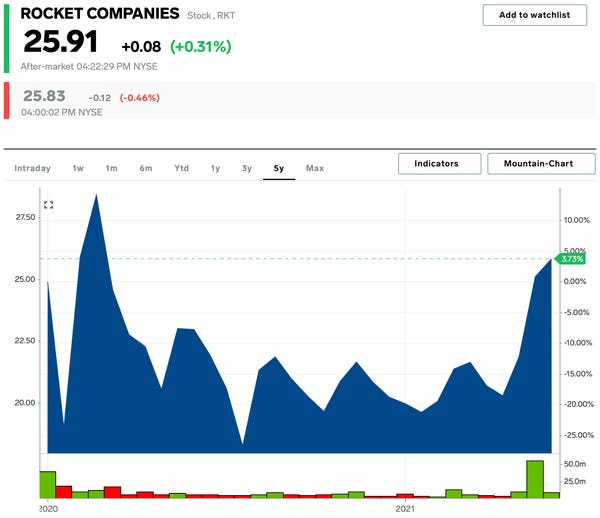 He said the company’s valuation and strategy are tailwinds for it going forward.

“When we started buying it just a couple weeks ago it was trading at 10-times earnings,” he said, adding that they trimmed some of their position in it when it surged because of day-trader activity, but that they still think it can double from current levels. “Earnings are still kind of depressed. This is a stock that’s trading at half its growth rate.”

“They’re a real leader in the space,” he continued. “They have the technology, good consumer awareness, so they’ll probably be adding more lines, meaning more areas of consumer finance” like auto loans, he said.