Still, the company’s revenue was down nearly 90% compared with what it was bringing in a year ago. It’s just the latest evidence that the air travel industry is facing a devastating financial outlook with no end in sight as Covid-19 cases spike in some areas of the United States.
United emphasized in a press release that it’s been able to slow the rate at which it is burning through cash, even as many of its planes remain in storage and ticket sales have slumped.

The airline is hemorrhaging $40 million each day, United said Tuesday, down from $100 million in April.
“We expect United produced fewer losses and lower cash burn in the second quarter than any of our large network competitors,” CEO Scott Kirby said in a statement. “We accomplished this by quickly and accurately forecasting the impact that COVID would have on passenger and cargo demand, accurately matching our schedule to that reduced demand, completing the largest debt financing deal in aviation history, and cutting expenses across our business.”

United said it expects its daily cash burn to dip to $25 million during the next quarter.
Investors signaled they weren’t surprised by the company’s results: United stock had ticked about 2% higher during trading hours but was flat in the after-hours market. 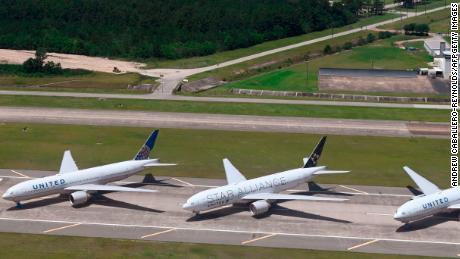 United and other major carriers have been attempting to quell consumers’ anxiety about flying during the Covid-19 pandemic. Last month, US airlines announced they would ban passengers who refuse to wear facial coverings, and United recently said it would increase air circulation on its planes during boarding and deplaning.
But health officials say flying in the coronavirus era is unavoidably risky. And most would-be fliers are staying home. Airport traffic is still down more than 70% so far in July compared with a year ago, according to passenger screening data.
As new outbreaks across the US continue to delay the resurgence in air travel that carriers hoped to see, United is warning that tens of thousands of its workers could be furloughed in October. That’s when the ban on involuntary job cuts, tied to bailout money airlines received months ago, expires.
Federal lawmakers are considering another stimulus package, but they remain divided over how it should be structured.
To help it stay afloat, United mortgaged its frequent flier program for a bank loan. The company said Tuesday that since the Covid crisis began it’s raised a total of $16.1 billion through debt offerings, issuing stock and federal grants and loans.

The company is still considering whether to accept a new loan from the Treasury Department, a spokesperson said in an email Tuesday, and it has until September to decide whether to take the funds.
Kirby, who took over United in May as part of a pre-planned leadership shakeup, will host his first conference call with investors Wednesday at 10:30 am ET.
Source: Read Full Article