Afterpay chief executive Anthony Eisen is pushing for the Reserve Bank to be stripped of its powers to unilaterally regulate payment firms such as buy now, pay later (BNPL) entrants, saying the system could present risks for fintech challengers.

As investors weigh the potential danger to Afterpay’s business from regulation, Mr Eisen has backed an overhaul that would result in the RBA losing its ability to impose surcharging rules on the BNPL sector. 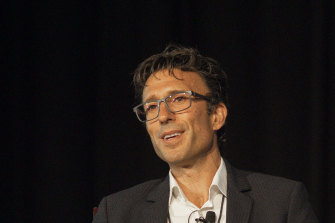 Instead, he called for Treasury to be given a greater role in setting policies for payments, a sector which is also being disrupted by the likes of Google, Facebook, Amazon and Uber.

The RBA, meanwhile, said there could be a case for potentially regulating all firms with a major role in facilitating payments, including BNPL operators, if it was in the public interest.

Under the current system, the RBA’s payment system board has the power to “designate” which parts of the payments sector it regulates, if it is in the public interest to do so. In a submission, Mr Eisen said this created uncertainty for Afterpay, arguing regulators could be more “collaborative and proactive” in dealing with innovative firms.

“At present, the ability of the RBA to designate a payment system unilaterally, coupled with broad ranging powers over designated payment systems, is a source of potential policy uncertainty,” Mr Eisen wrote in his submission to Treasury’s payment system review.

“There is potential uncertainty over what types of business models are captured by the definition of ‘payment system’, and uncertainty about how the RBA might seek to exercise its very broad powers in relation to those business models that it considers to fall within its jurisdiction,” Mr Eisen wrote.

Mr Eisen backed a model similar to the United Kingdom’s, where the government – instead of the regulator – has the power to “designate” a payment system and direct the regulator’s attention accordingly.

“We believe that the Treasury should be formally empowered to oversee the policy settings for the payments system, including in designating payment systems to bring them within the mandate of individual regulators,” he said.

The RBA should retain its responsibility for oversight of systemic risk and the overall performance of the payments system, he said.

Focus on ‘no surcharge’ rules

The RBA’s ability to designate a payment system is important for Afterpay because this could be the first step to regulatory intervention over its pricing, as occurred with credit cards in the 2000s. Afterpay makes the vast bulk of its revenue from charging merchants, and it bans them from passing on these cost to consumers through a surcharge.

The RBA has investigated banning these “no surcharge” rules, but it decided not to take action last year. Even so, the prospect of future regulatory change in this area is seen as a significant risk for Afterpay by some analysts, including investment bank UBS.

In its submission, published on Friday afternoon, the RBA said one option was to change the laws so that all businesses with a major role in payments could be subject to regulation, where this was in the public interest.

“The bank believes there is merit in establishing arrangements that would allow all entities that play a material role in facilitating payments to be regulated where doing so would promote competition and efficiency and control risk,” the RBA said.

Among a raft of submissions, the Commonwealth Bank said there were growing gaps in consumer protections as a result of technological change in payments, and future policies must prioritise stability and security as well as innovation. CBA did not comment on which government agencies should be accountable for payment regulation in any future models.

United Kingdom authorities this week said there was an urgent case for regulating BNPL businesses, but the prospect has not held back Afterpay shares, which on Friday rose 3.2 per cent to $151, just shy of a record high.

The Australian Banking Association this week said in its submission to the inquiry that the entry of tech giants into payments and rapid growth in the BNPL sector had highlighted the limits of the RBA’s regulatory remit.

Without naming Afterpay, it said regulatory gaps in the system could create problems, including with the detection of financial crime and anti-money laundering regulation. Afterpay’s head of public policy and regulatory affairs, Michael Saadat, said it was “strange” that banks had pointed to anti-money laundering risks given their own track record in this area, and suggested commercial factors may be their main concern.

“Afterpay is subject to Austrac’s requirements, and we identify and verify every customer that we onboard,” he said.