This year has been one steep learning curve for the nation’s medicos, economists and politicians. And you can bet there’ll be more “learnings” to learn in 2021.

Just as the epidemiologists learnt that the virus they assumed in their initial worst-case modelling of the effects of the pandemic wasn’t the virus we got, economists have learnt as they continually revised down their dire forecasts of the economic damage the pandemic and its lockdown would cause.

It reminds me of the “anchor and adjust” heuristic – mental shortcut – that behavioural economists have borrowed from the psychologists. Not only do humans not know what the future holds, they’re surprisingly bad at estimating the size of things. 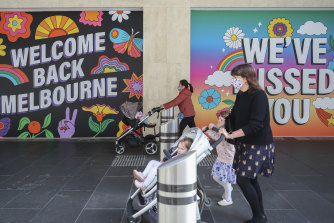 The bounce-back in the economy has been much better than first thought.Credit:AP

They frequently estimate the absolute size of something by thinking of something else of known size – the anchor – and then asking themselves by how much the unknown thing is likely to be bigger or smaller than that known thing.

(Trick is, we often fail to ensure the anchor we use for comparison is relevant to the unknown thing. Experiments have shown that psychologists can influence the answers subjects give to a question such as “how many African counties are members of the United Nations?” by first putting some completely unrelated number into the subjects’ minds.)

The econocrats have been furiously anchoring-and-adjusting the likely depth and length of the coronacession all year.

Their initial forecasts of the size of the contraction in gross domestic product and rise in unemployment – which were anchored on the epidemiologists’ original modelling results – soon proved way too high. (Treasury’s first estimate of the cost of the JobKeeper wage subsidy scheme was way too high for the same reason.)

When Prime Minister Scott Morrison started assuring us the economy would “snap back” once the lockdown was over, many people (including me) expressed scepticism.

An economy couldn’t simply “hibernate” the way bears can. Businesses would collapse, some jobs would be lost permanently, and business and consumer confidence would take a lasting hit. There’d be some kind of bounce-back, but it would be way smaller and slower than Morrison was implying.

Wrong. The first reason we overestimated the hit from the pandemic was our much-greater-than-expected success in suppressing the virus. Early expectations were for total hours worked to fall by 20 per cent and the rate of unemployment to rise to 10 per cent.

Morrison’s impressive handling of the pandemic – being so quick to close Australia’s borders, acting on the medicos’ advice, setting up the national cabinet, conjuring up personal protective equipment, and encouraging the states to build up their testing and tracing capability – gets much of the credit for this part of our overestimation.

But the main reason things haven’t turned out as badly as feared is that the economy has rebounded much more in line with Morrison’s assurance than with the doubters’ fears. Victoria’s second wave made this harder for some to see, but last week’s labour force figures for November make it very clear.

Total employment fell by 870,000 between March and May, but by November it had increased by 730,000, an 84 per cent recovery. Victoria accounted for most of the jobs growth in November and now has pretty much caught up with the other states – the more remarkable because its lockdown was so much longer and painful.

Admittedly, more than all the missing 140,000 jobs are full-time, suggesting that some formerly full-time jobs may have become part-time.

By the time of the delayed budget 10 weeks ago, the forecast peak in the unemployment rate had been cut to 8 per cent, but in last week’s budget update it was cut to 7.5 per cent by the first quarter of next year.

Question is, why has the rebound been so much stronger than even the government’s forecasts predicted? Two reasons – but I’ll save them for next Monday.