Almost lost within the controversial wash-up of the US election was a significant development in Donald Trump’s trade war against much of the rest of the world. The European Union has hit back.

On Monday, the EU announced that it would impose its own tariffs on US products in a delayed tit-for-tat response to the US tariffs on European exports. Both sets of tariffs relate to a 16-year-old dispute before the World Trade Organisation over rival claims of illegal subsidies to Europe’s Airbus and America’s Boeing aircraft.

The US won the first round of the bout last year when the WTO ruled that it could impose punitive tariffs on $US7.5 billion ($10.3 billion) of Europe’s exports to the US after finding that European governments had subsidised Airbus. The US levied tariffs on products including European aircraft, French wine, Italian cheese, olives, whisky and prune juice. 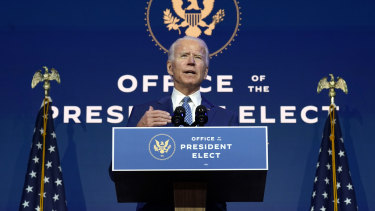 The Europeans, and America’s other trade partners, are placing their hopes in a Biden presidency.Credit:AP

The WTO also found earlier this year, however, that Boeing had received subsidies in the form of US state tax breaks and authorised the EU to impose its own $US3.99 billion of tariffs.

The Europeans had held off acting in the hope that they could negotiate an amicable settlement and avoid the risk of an escalation in hostilities if they imposed their own tariffs, but the lack of progress in talks with the US made a negotiated outcome unlikely.

Brussels has therefore decided to target US aircraft, tractors, gym equipment, casino tables, molasses, bourbon and fruit juices with its own tariffs. It’s presumably a coincidence that Georgia, where a recount of the votes in the US election will occur and where there will be a run-off for two Senate seats that could determine control of the Senate, exports molasses.

The Europeans are placing their hopes in a Biden presidency.

It is apparent that Biden’s foreign policies will include re-embracing the traditional US allies that Trump distanced, unsettled and upset with his nationalistic, isolationist and trade-dominated "America First" approach to international relations.

Normalising those relationships will involve ending the trade conflicts with Europe, Canada, Japan and others.

A broad agreement with the EU on permitted and unlawful subsidies could see the WTO-related tariffs removed.

Similarly, tariffs on steel and aluminium exports, — which were the first shots in Trump’s trade wars and were levied on America’s allies under the laughable pretext of "national security" — and Europe’s retaliatory tariffs on US products like bourbon, Harley-Davidson motor bikes and Levi Strauss jeans, could also be withdrawn by mutual agreement.

With the Biden administration’s likely desire to rebuild both America’s economic and strategic alliances, including a recommitment to multilateral organisations like the WTO, NATO and World Health Organisation while leading efforts to reform them, there is a very real prospect that most of Trump’s trade wars will end.

Most, but not all. A continuing point of contention will be European attempts to impose digital service taxes on mostly US tech companies like Facebook and Google, which is part of a more global push to capture taxes from those companies' operations outside the US. That’s not a dispute easily reconciled.

No approach to China

Of far greater import will be the Biden administration’s attitude to China. The Democrats are no less suspicious of China’s economic and geopolitical ambitions than the Republicans and are expected to be as firm on trade issues, national security/technology issues and issues like China’s treatment of Hong Kong and the Uighurs as their predecessors.

They might approach them differently – there is recognition that Trump’s tariffs, for instance, have been more damaging to American companies and consumers than the economies they have targeted and have had no impact on America’s overall trade deficits – but the tariffs at least give the new administration a starting point for negotiations.

Biden is more likely to rely on re-established relationships with allies to present a more formidable front to China on unfair trade practices and intellectual property protections, and the other sore points in China’s relationships with the West.

He is also expected to review Trump’s withdrawal from the Trans-Pacific Partnership trade agreement that includes Australia, Japan, Canada, New Zealand and a number of South American and Asian economies.

The TPP provides a counter-weight to China’s regional aspirations, although it doesn’t appear to be a Biden priority. It wasn’t mentioned during the election campaign.

The new administration will also inevitably review the Trump administration’s aggressive use of the leverage provided by the US dollar’s reserve currency status to impose financial sanctions on individuals and nation states.

During the past four years the US has issued more than 3500 sanctions, ranging from those on Iran, Venezuela and North Korea to individuals in Russia and China. The sanctions on Iran and Venezuela caused deep economic distress without the regime changes or other policy goals the US sought.

Only this week, even as the administration sanctioned four more individuals it deemed responsible for the loss of Hong Kong’s autonomy, China started purging pro-democracy lawmakers from Hong Kong’s legislature.

Like the existing tariffs, the sanctions do provide a Biden administration leverage, but it could be expected to use them more selectively and consistently and have a more developed foreign policy framework and more realistic objectives than its predecessor's.

Again, actions taken with the support of powerful allies – the Europeans have done their utmost to try to protect the original deal the Obama administration, and its allies, struck with Iran that limited its nuclear ambitions – are likely to be more effective than unilateral actions by the US.

There is an expectation that on trade and foreign affairs the new administration will be less erratic and trigger-happy and more stable than the Trump team, with its revolving door of key officials and downgrading of administrative capacity through its purging of anyone believed to be something other than a fervent Trump enabler.