The Fed thinks the only way to fight inflation is by depressing the economy: Steve Forbes

Inflation at the wholesale level rose more than expected in September as prices for everyday necessities remain at a multi-decade high, squeezing businesses and millions of American households.

The Labor Department said Wednesday that its producer price index, which measures inflation at the wholesale level before it reaches consumers, rose 0.4% in September from the previous month. On an annual basis, prices soared 8.5%. That is down from the 8.7% recorded in August and marks the lowest reading since July 2021.

Still, those figures were both higher than the 8.3% headline figure and 0.3% monthly gain forecast by Refinitiv economists, a worrisome sign for the Federal Reserve as it seeks to cool price gains and tame consumer demand with an aggressive interest rate hike campaign.

Excluding food, energy and trade services, inflation at the wholesale level increased 0.4% for the month – the fastest gain since May. Over the past 12 months, core prices climbed 5.6%.

AS INFLATION RAGES, MORE AMERICANS ARE STRUGGLING TO PAY THEIR BILLS

Overall, prices for goods jumped 0.4% last month after declining 1.1% in August. The bulk of the increase – about 60% – can be traced to a 1.2% monthly surge in prices for food, including a stunning 15.7% advance in the cost of fresh and dry vegetables, according to the Labor Department.

Energy prices, meanwhile, climbed 0.7%, despite a 2.0% drop in the cost of gasoline. That is largely due to the increase in the cost of diesel fuel, residential natural gas and home heating oil. 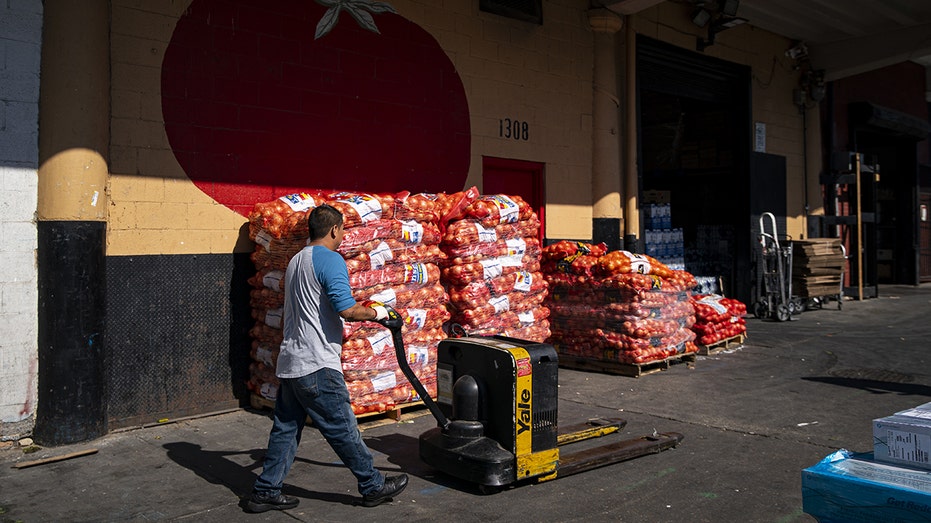 A worker prepares to wheel onions on a pallet at a wholesale produce market in the Union Market district in Washington, D.C., US, on Tuesday, Aug. 30, 2022. (Photographer: Al Drago/Bloomberg via Getty Images / Getty Images)

These numbers come just one day before the Labor Department reports the consumer price index, which measures the prices paid directly by consumers.

The CPI, which will be released Thursday at 8:30 a.m. ET, is expected to be another doozy: Economists surveyed by Refinitiv anticipate that inflation rose 0.3% in September on a monthly basis, faster than the 0.1% pace in August.

Both data releases are considered to be important measurements of inflation, with the PPI believed to be a good leading indicator of inflationary pressures as costs work their way down to consumers.

This is a developing story. Please check back for updates.