Doing "whatever it takes" to save the global economy from the coronavirus pandemic is going to cost a lot of money. The US government alone is spending a few trillion dollars, and the Federal Reserve is creating another few trillion dollars to keep the financial system from collapsing.

A custom Bloomberg index measuring M2 figures for 12 major economies including the US, China, euro zone and Japan shows their aggregate money supply had already more than doubled to $US80 trillion from before the 2008-2009 financial crisis. 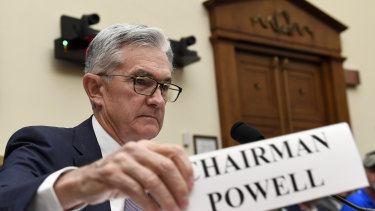 The US Fed is creating trillions to keep the financial system from collapsing.Credit:AP

These numbers are so large that they no longer have any meaning; they are simply abstractions. It's been some time since people thought about the concept of money and its purpose. The broad idea is that money has value, but that value is not arbitrary. Former Fed Chairman Paul Volcker once said in an interview that "it is a governmental responsibility to maintain the value of the currency they issue. And when they fail to do that, it is something that undermines an essential trust in government."

The dollar has no real intrinsic value, backed only by the full faith and credit of the US government. Under a fiat currency system, the government says that a dollar is a dollar. Its value relative to things such as other currencies and gold is determined on global markets.

Gold is considered to be an objective store of value, and the metal's rise in dollar terms can be expressed another way, which is that the dollar fell in gold terms. That implies the market has rendered a decision on the value, or rather, the purchasing power of the dollar.

The three main functions of a currency are as a unit of account, a medium of exchange and a store of value. It is that last function that is most important. Ideally, a central bank would want its currency to retain its value over time. The era of flexible monetary standards, however, allow central banks to manipulate a currency's value to help fight recessions as well as smooth out and lengthen business cycles at the expense of inflation. But even low inflation, say on the order of 2 per cent, will greatly erode the purchasing power of a currency over time. 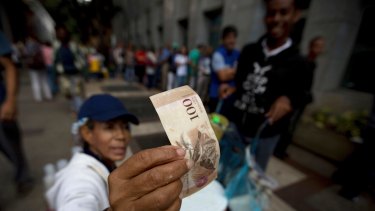 During Venezuela’s economic crisis, their currency was declared worthless and money littered the streets. Credit:AP

The counter-example to all this is Japan, which historically has had the most debt relative to the size of its economy and the most radical monetary policy, and yet has a peaceful, productive society with scant inflation. Demographics explain a lot about inflation and inflation expectations, and Japan's steadily declining and ageing population has put downward pressure on prices for years in spite of all the printing. Economists and central banks generally fear deflation more than inflation because it can hinder investment. History has shown that persistently high inflation rips societies apart; in deflation, people band together.

Throughout Venezuela's economic crisis, we saw images of ordinary Venezuelans tossing their useless bolivars in the streets. That is what happens when money has lost all meaning; it is in jeopardy of becoming a commodity when it is supposed to be a scarce resource. There are a million reasons why the US will never meet the same fate as Venezuela, but you still don't want to tamper with people's perception of the value of money. After you throw a few trillion dollars around, people start to believe that it's all a big joke.

Dillian is the editor and publisher of The Daily Dirtnap, investment strategist at Mauldin Economics, and the author of "Street Freak" and "All the Evil of This World." He may have a stake in the areas he writes about.