It’s an understandable error – and I’m as guilty of it as anyone – but it’s now clear governments and their econocrats misunderstood and mishandled the COVID-19 pandemic from the start. Trouble is, they’re now misreading the pandemic’s inflation phase at the risk of a recession.

The amateurish way governments, central banks and economists have sought to respond to the pandemic is understandable because this is the first pandemic the world’s experienced in 100 years. 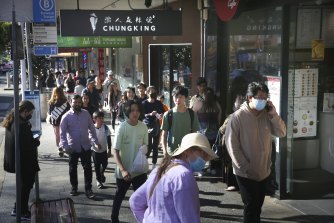 We risk an old-style recession if we overreact to rising prices and tighten up too hard. Credit:James Alcock

But it’s important we understand what we’ve got wrong, so we don’t compound our errors in the inflation phase, and so we’ll know how to handle the next pandemic – which will surely arrive in a lot less than 100 years.

We’ve done so because the whole theory and practice of “managing” the macroeconomy has always focused on “demand management”.

We’re trying to smooth the economy’s path through the ups and downs of the business cycle so as to achieve low unemployment on one hand and low inflation on the other.

When the pandemic arrived in early 2020, we sought to limit the spread of the virus by closing our borders to travel, ordering many businesses to close their doors and ordering people to leave their homes as little as possible, including by working or studying from home.

So, the economy is rolling on normally until governments suddenly order us to lock down. Obviously, this will involve many people losing their jobs and many businesses losing sales. It will be a government-ordered recession.

Since it’s government-ordered, however, governments know they have an obligation to provide workers and businesses with income to offset their losses. Fearing a prolonged recession, governments spend huge sums and the Reserve Bank cut the official interest rate to almost zero. 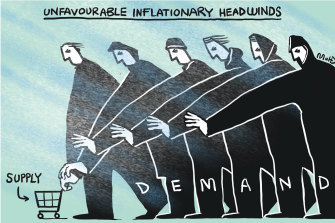 Get it? This was a government-ordered restriction of the supply of goods and services, but governments responded as though it was just a standard recession where demand had fallen below the economy’s capacity to produce goods and services and needed an almighty boost to get it back up and running.

The rate of unemployment shot up to 7.5 per cent, but the national lockdown was lifted after only a month or two. As soon it was, everyone – most of whom had lost little in the way of income – started spending like mad, trying to catch up.

Unemployment started falling rapidly and – particularly because the pandemic had closed our borders to all “imported labour” for two years – ended up falling to its lowest rate since 1974.

So, everything in the garden’s now lovely until, suddenly, we find inflation shooting up to 6.1 per cent and headed higher.

One small problem. The basic cause of our higher prices isn’t excess demand, it’s a fall in supply. The main cause is disruption to the supply of many goods, caused by the pandemic. To this is added the reduced supply of oil and gas and foodstuffs caused by Russia’s attack on Ukraine. At home, meat and vegetable prices are way up because of the end of the drought and then all the flooding.

Get it? Once again, we’ve taken a problem on the supply side of the economy and tried to fix it as though it’s a problem with demand.

Because the pandemic-caused disruptions to supply are temporary, the Ukraine war will end eventually, and production of meat and veg will recover until climate change’s next blow, we’re talking essentially about prices that won’t keep rising quarter after quarter and eventually should fall back. So surely, we should all just be patient and wait for prices to return to normal.

But it’s our misdiagnosis of the “coronacession”that’s left us with demand so strong it’s too easy for businesses to get away with slipping in price increases that have nothing to do with supply shortages.

Why then are the financial markets and the econocrats so worried that prices will keep rising, we’ll be caught up in a “wage-price spiral” and the inflation rate will stay far too high?

Short answer: because of our original error in deciding that a temporary government-ordered partial cessation of supply should be treated like the usual recession, where demand is flat on its back and needs massive stimulus if the recession isn’t to drag on for years.

If we’d only known, disruptions to supply were an inevitable occurrence as the pandemic eased. What no one foresaw was everyone cooped up in their homes, still receiving plenty of income, but unable to spend it on anything that involved leaving home.

But it’s our misdiagnosis of the “coronacession” – propping up workers and industries far more than they needed to be – that’s left us with demand so strong it’s too easy for businesses to get away with slipping in price increases that have nothing to do with supply shortages.

Now all we need to complete our error is to overreact to the price rises and tighten up so hard we really do have an old-style recession.