I fear we may be changing places with the United States. I fear the economy’s rapid rebound may have misled Scott Morrison into believing we’re home and hosed. I fear the Smaller Government mentality may trip us up again.

In response to the global financial crisis of 2008, the Americans and Europeans spent huge sums and ran up big budget deficits and public debt. They had to rescue their teetering banks and get their frozen economies going again.

It worked. The financial crisis dissipated and their economies started to recover. But before long they got a bad case of the Smaller Government frights. Look at those huge deficits! What have we done? Our children will drown in government debt! 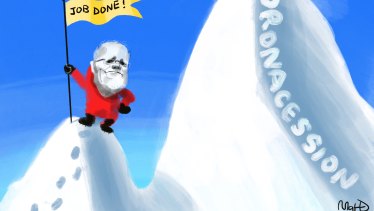 Scott Morrison is wrongly assuming the economic recovery is done and dusted.Credit:Matt Davidson

So they put their budgets into reverse and cut government spending – especially spending aimed at helping the poor and unemployed – to get their deficits down and slow the growth in debt. Critics dubbed this a policy of “austerity”.

Trouble was, it backfired. Their economies weren’t growing strongly enough to withstand the withdrawal of government support. Their growth slowed, their budget deficits didn’t fall much, and their premature removal of support contributed to the deeper, structural problems that caused the developed economies to endure a decade of weak growth.

Point to note: unlike the Americans (and the others) our Rudd-Gillard government didn’t take fright and start slashing government spending. But now we’ve come to the global coronacession, it seems this time the roles may be reversed.

The Americans – who, admittedly, are in a much deeper hole than us – have just legislated a third, $US1.9 trillion ($2.5 trillion) spending package.

So what are we doing? With the economy having rebounded strongly in the second half of last year, we’re concluding the recovery’s in the bag and proceeding to wind back the main stimulus measures as fast as possible.

At the Australian Financial Review’s business summit on Wednesday, one speech was given by Morrison and another by Reserve Bank governor Dr Philip Lowe. Their contrasting tones really worried me.

Morrison’s self-congratulatory speech could have come with a big, George W Bush-like sign, MISSION ACCOMPLISHED. He said it had been a tough 12 months, “but here we are, leading the world out of the global pandemic and the global recession it caused”.

He recalled telling last year’s summit that the government’s economic response “would be temporary and have a clear fiscal [budgetary] exit strategy”.

And “thankfully, we are now entering the post-emergency phase of the . . . response. We can now switch over to medium and longer-term economic policy settings that support private sector, business-led growth in our economy.”

Get it? Now it’s the time for the government to pull back and for business to take the running. Why? “Because you simply cannot run the Australian economy on taxpayers’ money forever. It’s not sustainable.”

(Note the trademark Morrison argument-by-non-sequitur: since you can’t do it forever, you mustn’t do it for another few years.)

Trouble is, Lowe gave an unusually sombre speech, highlighting the key respects in which business wouldn’t be taking the running.

He warned that the better-than-expected rebound after the lifting of the lockdown “does not negate the fact that there is still a long way to go and that the Australian economy is operating well short of full capacity. There are still many people who want a job and can’t find one and many others want to work more hours”.

“And on the nominal side of the economy [that is, on wages and prices] we have not yet experienced the same type of bounce-back that we have in the indicators of economic activity [such as employment and GDP]. For both wages and prices, there is still a long way to go to get back to the outcomes we are seeking.” 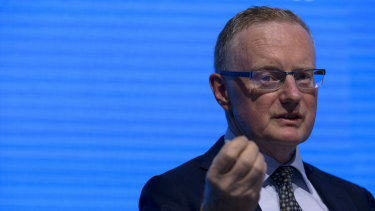 One of the main ways we get “business-led growth” is by growth in its investment in expansion. But it’s clear Lowe’s worried that it’s not really happening and may not for some years.

“While there was a welcome pick-up in the December quarter, particularly in machinery and equipment investment, investment is still 7 per cent below the level a year earlier . . . Non-residential construction is especially weak, with the forward-looking indicators suggesting that this is likely to remain so for a while yet,” he said.

Since 2010, business investment as a proportion of gross domestic product has averaged just 9 per cent, compared with 12 per cent over the previous three decades.

“A durable recovery from the pandemic requires a strong and sustained pick-up in business investment. Not only would this provide a needed boost to aggregate demand over the next couple of years, but it would also help build the [stock of physical capital] that is needed to support future production,” Lowe said.

“Currently, wages growth is running at just 1.4 per cent, the lowest rate on record. Even before the pandemic, wages were increasing at a rate that was not consistent with the inflation target being achieved. Then the pandemic resulted in a further step-down. This step-down means that we are a long way from a world in which wages growth is running at 3 per cent plus.”

The financial markets need to remember that you don’t get high inflation without high wages. Business needs to remember that its sales won’t grow strongly if it keeps sitting on its customers’ wages.

And Morrison needs to remember that if he withdraws budgetary support at a time when business is unlikely to take up the slack, the economy will go flat and the voters will blame him.