The "king of the high street" has lost his realm.

The collapse of British businessman Philip Green's Arcadia fashion empire into administration on Monday looks set to bring an inglorious end to a remarkable, and controversial, career.

With about 13,000 jobs under threat, and an estimated 350 million ($467 million) hole in the company's pension fund, the tycoon may ultimately be stuck with another, less-regal moniker: "The unacceptable face of capitalism." 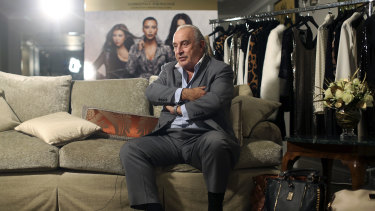 The 68-year-old has had a colourful career.Credit:Bloomberg

For two decades, the 68-year-old dominated the British retail scene and could seemingly do no wrong, building a multi-billion-pound fortune through a series of acquisitions.

He was knighted by the Queen, feted by Prime Ministers Tony Blair and David Cameron, and rubbed shoulders with A-listers like supermodel Kate Moss and actor Sylvester Stallone.

Based in Monaco, home of the super-rich, he was oft snapped by paparazzi on his £100 million pound superyacht, Lionheart, and even hired Beyonce to perform at his son's bar mitzvah bash.

He had bought department store chain BHS for £200 million in 2000, then Arcadia for £850 million pounds two years later and twice tried, and failed, to buy Marks & Spencer .

His flagship brand, Topshop, was the go-to destination for teenagers and affordable fashion lovers. In 2009, he took the brand to the United States, opening a big New York store.

When he sold a 25 per cent stake in Topshop to US private equity firm Leonard Green & Partners in 2012, that brand alone was valued at 2 billion, cementing his oft-cited nickname of "king of the high street".

What followed was a series of business missteps that saw his empire unravel, and also trashed the personal reputation of a businessman whose street-smart public image belied a more genteel start in life.

Green went to the exclusive boarding school Carmel College in southern England, but he left at 16 with no formal qualifications and, backed by a loan from his family, threw himself into the rough and tumble of the London rag trade.

A bricks-and-mortar retailer, he failed to adapt his fast-fashion brands when competitors emerged.

They were undercut by new players like Inditex's Zara, H&M and Primark, while their failure to successfully develop online businesses saw them outflanked by e-commerce specialists such as ASOS and Boohoo . 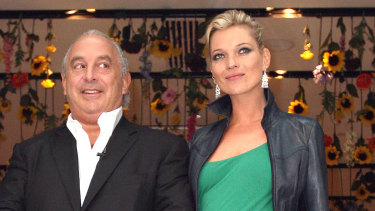 Philip Green, the billionaire owner of Arcadia Group, and model Kate Moss, at the opening of the Topshop store in New York in 2009.Credit:Bloomberg

Midas had lost his touch. Topshop was no longer cool.

The hammer blow for Green's reputation came in 2015 when he sold BHS to a collection of little-known investors, including former bankrupt Dominic Chappell, for a nominal sum of one pound.

Up until then, politicians, the public and press had often admired Green, even with his extravagant lifestyle.

In 2005 when Arcadia paid Green's wife Tina, the group's ultimate owner, a £1.2 billion dividend – one of the biggest in British corporate history – some people had decried the payout while others saw it as the fruits of his success.

Britain turns on its tycoon

After BHS's collapse, however, all bets were off.

Lawmakers branded him the "unacceptable face of capitalism", saying his greed and disregard for corporate governance led to the company's demise.

They called for him to be stripped of his knighthood, while newspapers vilified and lampooned him as a fat-cat tycoon.

After the pensions regulator pursued him, Green wrote a cheque for £363 million to help plug the BHS pensions fund hole. 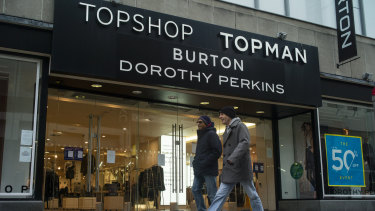 But his reputation was irreparably damaged, and further tarnished when he was named in Britain's parliament as having taken legal action to try to prevent publication of allegations of sexual harassment by him against Arcadia staff. He denies the allegations.

All the while, trading continued to deteriorate at Arcadia, which owns the Topshop, Topman, Dorothy Perkins, Wallis, Miss Selfridge, Evans, Burton and Outfit brands, and has more than 500 stores.

The collapse of the group is a bitter blow to Green, who has long prided himself on his financial acumen. During an interview with Reuters in 2012 he pulled out a wad of fifty-pound notes from his trouser pocket.

"I'd rather talk about things I understand," he said. "This is money."

Related News:
Business News:
Saudi Wealth Fund in Talks with Lucid for Car Factory, FT Says
What will drive India’s growth in 2021?
Israel is freezing flights in and out of the country to slow the spread of COVID-19 strains
KLM to Keep Flying Long Haul With Deal for Testing at Airport
Biden's China policy is about to be just as assertive as Trump's, but much more effective
Recent Posts
This website uses cookies to improve your user experience and to provide you with advertisements that are relevant to your interests. By continuing to browse the site you are agreeing to our use of cookies.Ok