There’s a longstanding but unacknowledged – and often unnoticed – bias in mainstream commentary on the state of the economy. We dwell on problems created by governments or greedy workers and their interfering unions, but never entertain the thought that the behaviour of business could be part of the problem.

This ubiquitous pro-business bias – reinforced daily by the national press – is easily seen in the debate on how worried we should be about inflation, and in the instant attraction to the notion that continuing to cut real wages is central to getting inflation back under control. This is being pushed by the econocrats, and last week’s economic statement from Treasurer Jim Chalmers reveals it’s been swallowed by the new Labor government. 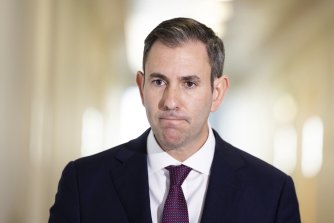 Last week’s economic statement from Treasurer Jim Chalmers shows the concept of real wage cuts to get inflation under control has been swallowed by the Labor government.Credit:Alex Ellinghausen

I’ve been arguing strongly that the primary source of the huge price rises we’ve seen is quite different to what we’re used to. It’s blockages in the supply of goods, caused by a perfect storm of global problems: the pandemic, the war in Ukraine and even climate change’s effect on meat and vegetable prices.

Since monetary policy can do nothing to fix supply problems, we should be patient and wait for these once-off, temporary issues to resolve themselves. The econocrats’ reply is that, though most price rises come from deficient supply, some come from strong demand – and they’re right.

Although more than half the 1.8 per cent rise in consumer prices in the June quarter came from just three categories – food, petrol and home-building costs – it’s also true there were increases in a high proportion of categories.

The glaring example of price rises caused by strong demand is the cost of building new homes. Although there have been shortages of imported building materials, it’s clear that hugely excessive stimulus – from interest rates and the budget – has led to an industry that hasn’t had a hope of keeping up with the government-caused surge in demand for new homes. It’s done what it always does: used the opportunity to jack up prices.

But as for a more general effect of strong demand on prices, what you don’t see in the figures is any sign it’s high wages that are prompting businesses to raise their prices. Almost 80 per cent of the rise in prices over the year to June came from the price of goods rather than services. That’s despite goods’ share of total production and employment being about 20 per cent.

This – along with direct measures of wage growth – says it’s not soaring labour costs that have caused so many businesses to raise their prices. Rather, strong demand for their product has allowed them to pass on, rather than absorb, the higher cost of imported inputs – and, probably, fatten their profit margins while they’re at it.

Take the amazing 7 per cent increase in furniture prices during the quarter. We’re told this is explained by higher freight costs. Really? I can’t believe it.

Nor can I believe that months of unrelenting media stories about prices rising here, there and everywhere – including an open mic for business lobbyists to exaggerate the need for price rises – haven’t made it easier for businesses everywhere to raise their prices without fear of pushback from customers.

But whenever inflation worsens, the economists’ accusing fingers point not to business but to the workers. No one ever says businesses should show more restraint, they do say the only way to fix the problem is for workers to take a real-wage haircut.

There’s no better evidence of the economics profession’s pro-business bias than its studious avoidance of mentioning the way the profits share of national income keeps rising and the wages share keeps falling.

In truth, the story’s not as simple as it looks, but it seems to have occurred to no mainstream economist that what may be happening is business using the cover of the supply-side disruptions to effect a huge transfer of income from labour to capital.

Allowing real wages to fall significantly for three years in a row – as Chalmers’ new forecasts say they will – would certainly be the quickest and easiest way to lower inflation, but do the econocrats really imagine this would leave the economy hale and hearty?

Yet another sign of economists’ pro-business bias is that so few of them know much – or even think they need to know much – about how wages are fixed in the real world. Hence all the silliness we’re hearing about the risk of lifting inflation expectations. Can’t happen when workers lack bargaining power.

You’d think an understanding of wage-fixing is something a Labor government could bring to the table. But no. All we’re getting from Chalmers is that we need to cut real wages so we can increase them later. Yeah, sure.