Starbucks employees want ‘more of a say’ in the workplace: Shift supervisor

Starbucks workers are on strike again.

Starbucks Workers United, the group organizing unionization efforts at the coffee chain, said Friday that more than 1,000 baristas at store locations nationwide are participating in a three-day walkout, calling the strike "the longest collective action of our campaign yet."

The group posted an interactive Google Map showing more than 100 retail locations where workers are participating in the walkout. The strike is a "doubling down" effort following a previous action on Nov. 17, when workers at 110 Starbucks stores held a one-day walkout. That walkout coincided with the company's annual Red Cup Day, a holiday celebration where the store gives customers reusable red cups with the purchase of certain drinks.

The strike also comes after Starbucks shuttered its Broadway East and Denny Way location in Seattle, which was the first store in the city to unionize. The company said the store was closed due to "safety and security incidents."

Images of picketing baristas were posted on social media.

The Seattle store was shut down on Dec. 9, the first anniversary of Starbucks employees in Buffalo, New York. making history by unionizing.

Infuriated union organizers charged that Starbucks "decided to escalate their anti-union campaign by closing the Broadway & Denny location, the first store to organize in Seattle, on the one-year anniversary of the first Starbucks union election win."

"Starbucks doubled down on their union-busting, so workers are going to double down their fight for a contract," the union said in a press release Friday. 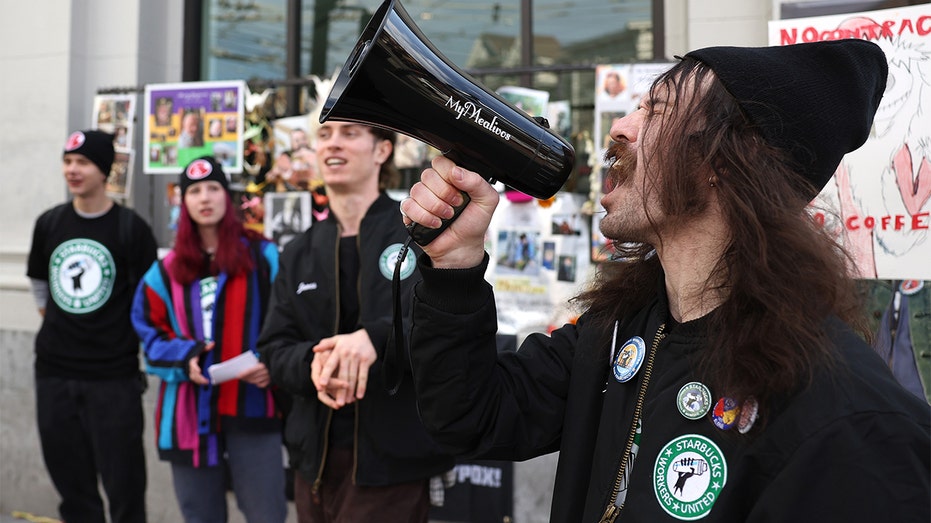 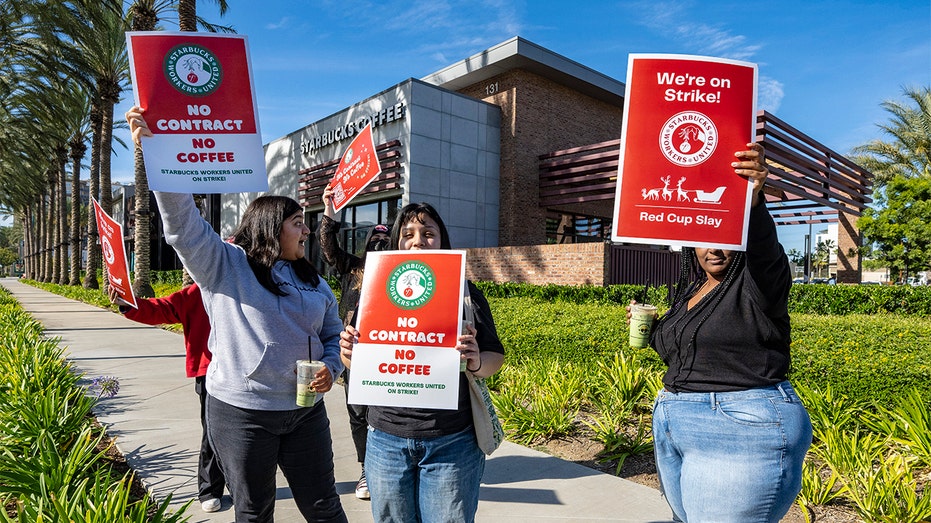 Workers carry strike signs outside a unionized Starbucks Coffee on Katella Avenue in Anaheim, California, as they join fellow workers and those at more than 100 other unionized locations nationwide on Thursday, Nov. 17, 2022, in a Red Cup Rebellion, (Mark Rightmire/MediaNews Group/Orange County Register via Getty Images / Getty Images)

"Starbucks sent a clear message when they closed the Broadway and Denny store," said Michelle Eisen, a Buffalo barista who is leading unionization efforts. "They’re doubling down on their union-busting, so we’re doubling down, too. We’re demanding fair staffing, an end to store closures, and that Starbucks bargain with us in good faith."

The company told FOX Business, "It is unfortunate that Workers United continues to spread misleading claims while disrupting the Starbucks Experience that our partners and customers have come to love and expect."

"Despite these delay tactics, we remain focused on working together and engaging meaningfully and directly with the union to make Starbucks a company that works for everyone, and we urge Workers United to uphold their promises to partners by moving the bargaining process forward," a Starbucks spokesperson said.

The striking workers have claimed Starbucks employees are "underpaid, forced to run perpetually understaffed stores and don’t have consistent schedules they can rely on."

They have demanded "the right to organize a union free of intimidation and fear" and accused the company of union-busting tactics.

Starbucks said the vast majority of stores where protests have happened have remained open, and that it respects workers' right to protest. The company added that less than 3% of its 9,000 U.S. company-operated stores have sought to unionize.