The nation’s largest superannuation fund AustralianSuper holds more than $230 million worth of Russian shares and $7 million of Russian Federation bonds.

It is a tiny amount for the fund behemoth, which has $233 billion in assets. However, the risk profile of these assets has drastically increased in the past few days – both from a financial and ethical perspective. 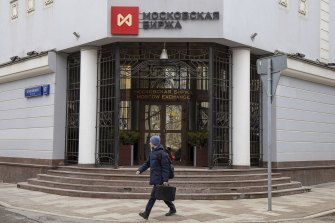 The Moscow Exchange is closed, putting the ability to retrieve overseas investments in Russian stocks in doubt.Credit:Bloomberg

AustralianSuper has declined to comment on whether it has taken any action to reduce its exposure to Russia. However, the investments were live at least six months ago, according to public disclosures, so arguably action should have been taken earlier.

The speed and size of Russia’s invasion of Ukraine caught many by surprise, including the country’s sovereign wealth fund and many large super funds.

Troops crossed the border last Thursday and by Monday, investors were scrambling to limit the financial fall-out.

Over the weekend, chief investment officers ordered the divestment of Russian stocks. Mandates were adjusted to ban new investments in the country and compliance teams worked around the clock to ensure portfolios did not breach government sanctions.

Nobody likes to say, “I told you so”, but ESG (environment, social, governance) investors could be forgiven for thinking it.

The “E” is the most widely cited non-financial risk as investors seek to protect their assets from climate change.

However, Seven Advisory managing director Mary Delahunty says failure to prepare for Putin’s war shows investors are still not fully considering the “S” and “G”, which are equally material.

An example of “G” risk is when an investor cannot liquidate assets if an authoritarian regime abruptly changes the law. The “S” risk relates to social harm as investors find themselves financing a brutal regime. Investors in Russia are now feeling both.

Delahunty says Russia’s annexation of Crimea in 2014 should have raised a red flag and prompted investors to review strategies for Russian exposures. “Reading the signals in a forward sense, instead of trying to act in crisis, is the true job of any investment professional.”

But right now, it’s all about damage control.

International sanctions are crippling Russia’s economy. The ruble fell by almost 30 per cent on Monday, prompting Russia’s central bank to hike its key interest rate to 20 per cent.

Emergency laws have been introduced to prevent foreigners from selling Russian stocks. The Moscow Exchange is closed.

Even if Australian investments in Russia could be sold, the value of these assets are plummeting.

The shares of Russian lender Sberbank has halved in value while oil and gas major Gazprom’s stock price is down 25 per cent in just five days. The stocks are owned by AustralianSuper and other funds.

In a best-case scenario, the shares will be sold at a substantial loss. Worst-case, investors won’t find a buyer and will be trapped in stranded assets.

The superannuation industry’s peak body estimates around 0.03 per cent of all super fund assets are exposed to Russia. When we’re talking about a $3.4 trillion industry, that’s more than $1 billion of Australians’ retirement savings. Hardly chump change.

Australian Ethical has a screen on buying Russian bonds and has no exposure to Russian companies. Head of research Stuart Palmer says the reason for this strategy is simple – to ensure members are not complicit in human rights abuses.

But a volatile geopolitical backdrop also feeds into corporate instability. “There might be risks associated with arbitrary government action,” Palmer says.

Telstra Super is a $23 billion fund that joined the cohort banning investments in thermal coal last year on climate grounds, and it has also avoided Russia.

Telstra Super chief investment officer Graeme Miller says the move was tactical. “We’ve all seen in recent days the governance issues that are associated with investing in that sort of place … It is a society that as we’ve seen the rule of law is very shaky, it’s a one party dictator state. It’s hardly solid for prudent investors.”

Aware Super was among the funds scrambling to divest. CIO Damian Graham is now considering a permanent ban on Russian investments due to the ESG risks “given what we know today”.

“If we look at the cascading of issues, the invasion has clearly invoked sanctions, the sanctions mean there is the real risk that investments you hold in Russia may not be accessible, and they may devalue.”

In a sign ESG investing is becoming mainstream, Wilson Asset Management’s global fund manager Nick Healy says he double-checked the portfolio for any Russian exposure in the weeks leading up to the invasion. He was relieved to find there was none.

“There are obvious question marks over the system, now that the dictatorship has come to light,” he says. “The expropriation of companies to Putin allies, the one-person rule, that’s firmly an ESG risk because its governance.”

But for others who have only just arrived at this conclusion, it might be too late.