Soaring inflation around the world, particularly in Europe and the US, is causing investors to dump stocks on global sharemarkets.

US share prices are down about 20 per cent so far this year, while the local benchmark S&P/ASX 200 Index is down more than 10 per cent. 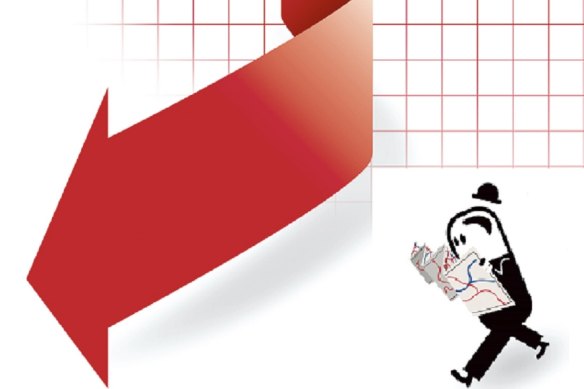 Sharemarkets are falling across the globe on global recession fears.Credit:Suzanne White

So, why are shares falling, and how come investors are so spooked about inflation?

US stocks continue to fall because of expectations the US Federal Reserve will increase official interest rates by 0.75 percentage points this week, as it seeks to curb inflation that is running at a four-decade high.

Investors fear that if the Fed keeps lifting rates, it may tip the world’s biggest economy into a recession, crimping company profits, investment returns – and share prices.

The worries come at a time when energy prices in Europe are surging – boosting inflation there – and China’s economic activity remains weak, amid COVID-19 lockdowns and a continuing property slump.

Many analysts expect our sharemarket will continue its descent in lockstep with overseas markets, but the declines may be somewhat tempered by better economic conditions at home.

Shane Oliver, chief economist at AMP Capital, says there is high risk of further falls on the Australian Securities Exchange in the short term because our inflation rate and interest rates are still rising, lifting the possibility of a local recession.

Still, many economists say the likelihood of Australia’s economy falling into recession is relatively small. Oliver puts the risk at about 30 per cent.

However, the World Bank says we may be edging toward a global recession in 2023.

‘Let your cash build and use rallies in prices to get rid of the rubbish and increase the quality of your portfolio.’

In a report last week, it said: “The world’s three largest economies – the United States, China, and the euro area – have been slowing sharply. Under the circumstances, even a moderate hit to the global economy over the next year could tip it into recession.”

The sharemarket may be down considerably, but Peter Warnes, head of equities research at Morningstar, says now is not a good time for investors to “buy the dip” in share prices. “Let your cash build and use rallies in prices to get rid of the rubbish and increase the quality of your portfolio,” he says.

Warnes says, “we do not have the issues” many other countries have that are sparking recession fears. The recently concluded profit reporting season showed “we are okay, and dividends are reasonable”, he says.

Still, he says Australia lives “in a global village” and there is potential for us to get “caught up in the backwash”.

Company outlook statements revealed this month suggest 2023 would be a lot tougher than 2022, Warnes says. Over the next 18 months, he is expecting dividend income to make up a much greater part of the total returns of investors, with far less coming from share price appreciation.

Hugh Dive, chief investment officer at Atlas Funds Management, says the reporting season was better than expected and that “what came out of it is that Australia is not a bad place to invest”.

He says our market drivers – banks, resources and energy companies – appear to be doing better than their overseas rivals.

“But it will be important for investors to factor in a less buoyant operating environment in the coming year,” he says.

CommSec forecasts that the S&P/ASX 200 would end the year close to 7000 points, a rise of about 3 per cent from current levels.