Russia’s economy is fraying, its currency has collapsed, and its debt is junk. Next up is a potential default that could cost investors billions and shut the country out of most funding markets.

Warning lights are flashing as the government kickstarts the process of paying $US117 million ($163 billion) in interest on dollar bonds , a key moment for debt holders who’ve already seen the value of their investments plunge since Russia invaded Ukraine last month. 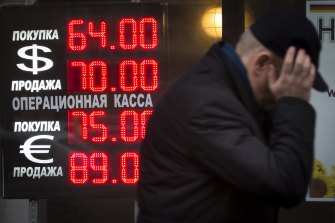 Russia’s economy is facing another blow.Credit:AP

The government says that all debt will be serviced, though it will happen in roubles as long as sanctions — imposed because of the war — don’t allow dollar settlements. Failure to pay, or paying in local currency instead of dollars, would start the clock ticking on a potential wave of defaults on about $US150 billion in foreign-currency debt owed by both the government and Russian companies including Gazprom, Lukoil and Sberbank.

Such an event will revive memories of previous crises, including Russia in 1998, when it defaulted on some rouble-denominated debt, and Argentina three years later.

Signs of looming financial damage are becoming apparent at many of the world’s biggest money managers, including BlackRock and Pacific Investment Management. But it’s not likely to be limited to these giant funds. Because much of Russia’s debt was rated investment grade just weeks ago, the securities were pervasive across global fixed-income portfolios and benchmarks, meaning the impact could ripple across pension funds, endowments and foundations.

Russia is already a commercial pariah, crippled by sanctions and the exodus of foreign firms such as Coca-Cola Co. and Volkswagen AG since the war started. The government has responded with capital controls, restricting outflows of money to protect the economy and the rouble.

Businesses and households are facing a double-digit economic slump and inflation accelerating toward 20 per cent. About half of the country’s foreign-exchange reserves — some $US300 billion — have been frozen, according to the finance minister. Regardless of the Kremlin’s policy on foreign debt payments, companies will find it harder to service their obligations as falling demand hits sales and profits.

Because of the sanctions, and various decrees Russia introduced in response, a default appears all-but inevitable. Swaps markets put about a 70 per cent chance on it happening this year. Fitch Ratings says it’s “imminent.” Indicative pricing on the country’s bonds values some of them near 20 cents on the dollar. Just days before the invasion, those same notes traded above par.

In addition to bonds crumbling to distressed levels, the conflict has left its mark on multiple markets. The rouble has plunged about 35 per cent against the dollar this year, and local stock trading has been shut for two weeks.

Russia’s late-1990s default was on domestic debt, so a foreign-currency default would be the first since the aftermath of the 1917 Revolution, when the Bolsheviks refused to recognise the tsar’s debts.

On Monday, Russia’s Finance Ministry issued an order to pay the $US117 million, although it didn’t specify the currency. Using roubles isn’t an option for this week’s coupons, based on the terms of those bonds.

If Russia doesn’t meet its obligations, there’s technically a 30-day grace period that gives it until April 15 to make good.

An official default declaration could also kick off claims on credit default swaps, insurance-like instruments designed to cover losses if a country or company fails to meet its debt obligations. 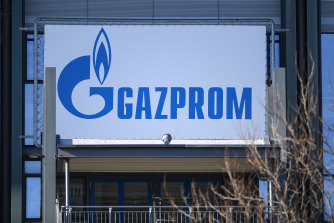 State-owned natural-gas giant Gazprom is one of the most heavily indebted Russian companies.Credit:Getty

According to Siobhan Morden, a fixed-income strategist at Amherst Pierpont, Russia’s dramatic, and sudden, plunge from investment-grade to a financial no-go area will worsen losses for debt holders.

“When a default is a slow train wreck due to policy mismanagement, you can reduce the economic impact and contain losses by gradually selling assets,” she said. “What makes this unique is this is a very sudden shock that catches everyone off guard.”

At Franklin Resources, one fund marked down its Russia bond holdings by more than half to $US194 million as of February 28. BlackRock funds exposed to Russia fell by more than 90 per cent after the invasion, and clients now have less than $US1 billion invested, down from about $US18 billion at the end of January. The decline probably reflects a range of factors, from writedowns to client redemptions since the war began.

Others with major exposure to Russia include Ashmore Group, an emerging-markets specialist, while Capital Group and Fidelity are among the top holders of Russia’s dollar bonds, according to data compiled by Bloomberg.

About $US120 billion of the current outstanding government and company debt is denominated in dollars, with the bulk of the remainder in euros, according to data compiled by Bloomberg. Roughly $US25 billion was issued by Gazprom, the state-owned natural-gas giant.

“There is nearly universal support for Ukraine, even among normally hard-bitten institutional investors. Some of those investors might want to strike a blow for the cause,”

While the debt is substantial, it’s probably not enough to cause a systemic problem for financial markets. That’s the view of International Monetary Fund Managing Director Kristalina Georgieva, who said last weekend that banks’ exposure is “not systemically relevant.”

A handful of the sovereign eurobonds do have contractual language allowing payments in local currency, and some companies issued their debt via foreign subsidiaries and have dollars offshore. Yet there’s still huge uncertainty, especially as clearing houses including Clearstream and Euroclear have stopped accepting the rouble as a settlement currency and have barred Russian entities from most transactions.

If bondholders don’t get paid in dollars on Wednesday, it would be the start of a very long, complicated process. History is an imperfect guide, but according to World Bank Chief Economist Carmen Reinhart, Russia already holds the record for the longest time between a default and some form of resolution with creditors, the near seven-decade gap to 1986. 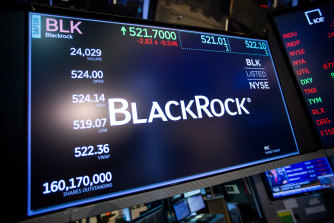 BlackRock has been reducing its exposure to Russia significantly. Credit:Bloomberg

As for Russian companies, even before a single one misses a payment on its obligations, another challenge is emerging: finding lawyers and advisers willing to take their business. Last week, JPMorgan Chase & Co. declined to advise search engine Yandex NV on a potential debt restructuring.

In the meantime, multiple deadlines are looming. Steel and mining company Severstal has a coupon due on Wednesday, and both Evraz and Tinkoff Bank have interest payments due Sunday. Gazprom has payments next week, with issuers including oil refiner Sibur and gold mining company Polyus to follow.

Creditors of companies that fail to pay their debts will likely have limited recourse in the near term, according to Tuck Hardie, a managing director in Houlihan Lokey’s financial restructuring group.

“As a practical matter, people may have to just stare at each other for a little bit,” Hardie said. “If the business is located in Russian sovereign territory, you can’t go after its assets. If it’s not, you might see the companies proactively file for court protection to prevent foreclosures, or you might see them enter into forbearance arrangements with debtholders.”

Lee Buchheit, one of the world’s most prominent debt-restructuring experts, says investors should get ready for a long haul. He suggests creditors may also be particularly tough with Russia for moral, as well as financial, reasons.

“There is nearly universal support for Ukraine, even among normally hard-bitten institutional investors. Some of those investors might want to strike a blow for the cause,” said Buchheit. “One way to do that would be to vote to accelerate Russian external bonds once the grace periods run out and pursue legal enforcement of the instruments. I would not be surprised if some bondholders decide to do this with greater alacrity than we normally see following a sovereign bond default.”