The ingredients that have led to advertised rentals increasing by up to 22 per cent over the past year have become more potent and will only add to the cost of living pressures.

The increase in mortgage interest rates, the changes in the make-up of households and the return of immigration will all play into what experts are starting to see as a significant jump in the cost of advertised rentals.

After two years of COVID-induced lack of demand for rental property which resulted in cheap rents, the tide has turned. 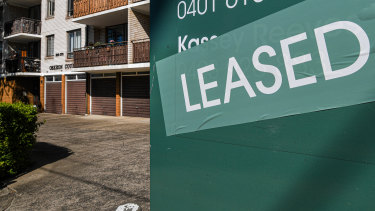 Vacancies rates are low and rents are rising in the main capital cities.Credit:Peter Rae

The major central business districts that were desolate during 2021 have been reinvigorated with vacancy rates dropping to 2.4 per cent in Melbourne, 3.4 per cent in Sydney and 2.7 per cent in Brisbane.

During the COVID lull, some investors took their rental properties off the market fearful of rental moratoriums or just to allow themselves access to a second property during the pandemic. But some have not relisted the homes for rent.

The move by some landlords to keep their investment properties off the market reduces the supply of stock available for rental, while the return of migration feeds into the increase in the demand.

Together they equate to higher prices for people currently looking to rent properties.

An SQM Research report revealed this week that national residential property rental vacancy rates fell to 1 per cent in March 2022, down from 1.2 per cent in February 2022. This, SQM said, represents half the total number of vacancies reported a year ago and the lowest national vacancy rate since 2006.

At a national level, it reported across all capital cities house rents had grown by 14.7 per cent over 12 months and units had become 11.2 per cent more expensive to rent with Brisbane topping the list to report a staggering 21 per cent rise in the rental cost for houses.

But the most compelling reason for rental prices to increase is a rise in interest rates. Banks have already been lifting rates – particularly on fixed loans – and this will accelerate when the Reserve Bank eventually starts to lift the official cash rate. Predictions on when this will begin range from June to September.

The big four banks are in tandem on the timing of the first rate rise being in June. CBA is predicting RBA cash rates to reach 1.25 per cent by February next year, Westpac is going to 2 per cent by June 2023, while National Australia Bank sees the RBA moving to 2.25 per cent in August 2024 and ANZ is looking at a peak above 3 per cent after 2023.

While advertised rental costs – which is measured when houses or apartments change tenants – is experiencing a major upswing, the rental rates for the broader stock of dwellings for rent has increased but by less.

The stock of dwellings for rent measure captures all rentals not just those that are advertised.

But the rising interest rates that investors will feel over the coming few years could be a trigger for landlords to extract higher rents from existing tenants.

A February survey by the National Australia Bank on rental expectations found average growth in rents in the next one to two years was set to outpace house price growth.

That said, there are already clear indications that the growth in house prices nationally has already peaked in some areas like Sydney and Melbourne, while rates of growth have slowed to a crawl in others.

This reflects the fact that prices have hit a housing affordability wall and that interest rates rise already in the market and those in prospect have dampened demand.

Now the affordability virus looks to have spread to the rental market.