The United States and China dealt with the spread of the devastating coronavirus pandemic in vastly different ways, and that split is reshaping the global battle between the world's two leading economies.

About 11 months after the Wuhan outbreak, China’s official GDP numbers this week show not only that the economy is growing, up 4.9 per cent for the third quarter from a year earlier, but also that the Chinese are confident enough the virus has been vanquished to go shopping, dine and spend with gusto. 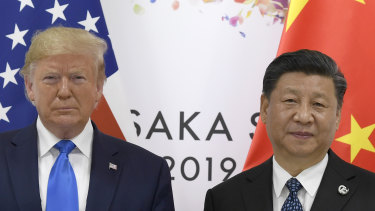 The US and China have tackled the pandemic in different ways.Credit:AP

China's total reported death toll is below 5,000 and new infections are negligible, the result of draconian lockdowns, millions of tests, and strict contact tracing that set the stage for an economic rebound.

"China's success in containing the virus has allowed its economy to rebound more quickly, and with relatively less policy support, as compared with other large economies," said former senior US Treasury official Stephanie Segal, a senior fellow at the US-based Centre for Strategic and International Studies.

In the United States, 221,000 people are dead from COVID-19 after a delayed federal response, partisan battles over mask-wearing and lockdowns, and plenty of public events that do not follow public health guidelines. The country is in the midst of a new wave of infections.

Entertainment venues, restaurants and tourist spots are closed or only partially open, millions of people are out of work indefinitely, GDP is expected to shrink this quarter and the United States faces a gap in economic output that could last years.

"Obviously the US government bungled it," said Harry Broadman, a former senior US trade official and managing director with Berkeley Research Group. The singular authority of China's Communist Party helped Beijing enforce contact tracing and lockdowns, Broadman said. Other democracies, including New Zealand and South Korea, stamped out the virus as China did.

The real difference between the United States and China is Washington "has been arguing over stimulus issues on Capitol Hill and it's still far too little and too late," said Broadman, who has served under both Republican and Democratic presidents. "That has created more and more uncertainty on the part of business."

Ahead of a November 3 re-election bid, US President Donald Trump has blamed China for the spread of the virus and asserted his administration had done all it could to contain it. Asked during a town hall due to be broadcast on Sinclair Broadcast Group on Wednesday if he would have done anything differently, Trump said, "No, not much."

Tyler Goodspeed, acting chairman of the White House Council of Economic Advisers, told Fox Business on Wednesday the pace of the US recovery to date had vastly exceeded expectations. But opinion polls show Americans are increasingly unhappy with Trump's handling of the pandemic.

"Reliance on investment-led growth, fueled by credit expansion, builds up even further leverage and risks in an already weak financial system, and will further pull down efficiency and the sustainable growth rate," said Mark Sobel, a former senior US Treasury official.

But for now, the divergent responses to the virus will have an impact on the fierce political and economic rivalry between Beijing and Washington with ripples felt around the world, experts said.

"China's economy in 2021 is going to be 10 per cent bigger than it was in 2019, and every other major economy is going to be smaller," said Nicholas Lardy, an economist with the Peterson Institute for International Economics. 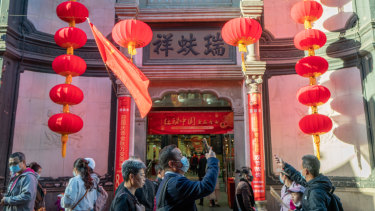 China’s economy is expected to be back at near full strength in 2010.Credit:Bloomberg

That means China's "role in the global economy is going to continue to expand," Lardy predicts, making any attempts by US policymakers to discourage other countries from deals with Beijing, or otherwise "decouple" China from the global economy, more difficult.

China's exports have been stronger than expected, bolstered by demand for medical goods overseas. While the IMF projects global trade volume will fall by 10.4 per cent in 2020, China's overall share of global trade has grown.

Beijing is experiencing other benefits as well. "We see signs of China's success in the exchange rate and equity market performance at a time when many other economies are under pressure," Segal said.

China's fiscal deficit for 2020 will expand by 5.6 percentage points to 11.9 per cent of GDP – a smaller-scale increase than the massive stimulus that Beijing deployed during the 2008-2009 financial crisis, the IMF's Fiscal Monitor shows.

By contrast, the United States will see a 12-percentage point increase in its 2020 fiscal deficit as a share of GDP, to nearly 19 per cent.

While China's consumption is improving, retail sales are still down 7.2 per cent over the first three quarters, with urban residents' disposable incomes down 0.3 per cent over the same period. Strict lockdowns earlier in the year led to months of lost wages for many workers.

In Beijing, officials are highlighting their leadership role.

"China's epidemic control and prevention is at the forefront of the world, and China's companies are supporting the global resumption of work and production through their own resumptions," said Liu Aihua, spokeswoman for the National Bureau of Statistics, at a news conference where she announced the third quarter GDP results.

Meanwhile, the United States still lacks a robust contact tracing system, or enough testing, Lardy said. These are things the US could have "done much better at without being an authoritarian single party state," he added.