Overstock.com, Inc. (OSTK) shares have rallied more than 900% over the past year, but Wedbush Securities sees more upside ahead.

Wedbush's Ygal Arounian reiterated an Outperform rating and $92.00 price target while adding the stock to the firm's Best Ideas List. Arounian sees multiple catalysts on the macro and micro level that could drive revenue and EBITDA upside. The analyst believes that the bias for substantial upside to consensus third quarter expectations and the stock's historical trading pattern around earnings suggest that there could be meaningful upside ahead.

Outperform means that the company will produce a better rate of return than similar companies, but the stock may not be the best performer in the index.

The move comes after Credit Suisse initiated coverage on Overstock shares in mid-September with an Outperform rating and a $91.00 price target. Analyst Seth Sigman believes that the company has an opportunity to reverse years of underperformance and capitalize on home furnishings' strong online growth that began in late 2019 and continued into 2020. Sigman added that the stock offers a unique relative value and profitability within the broader e-commerce spectrum. 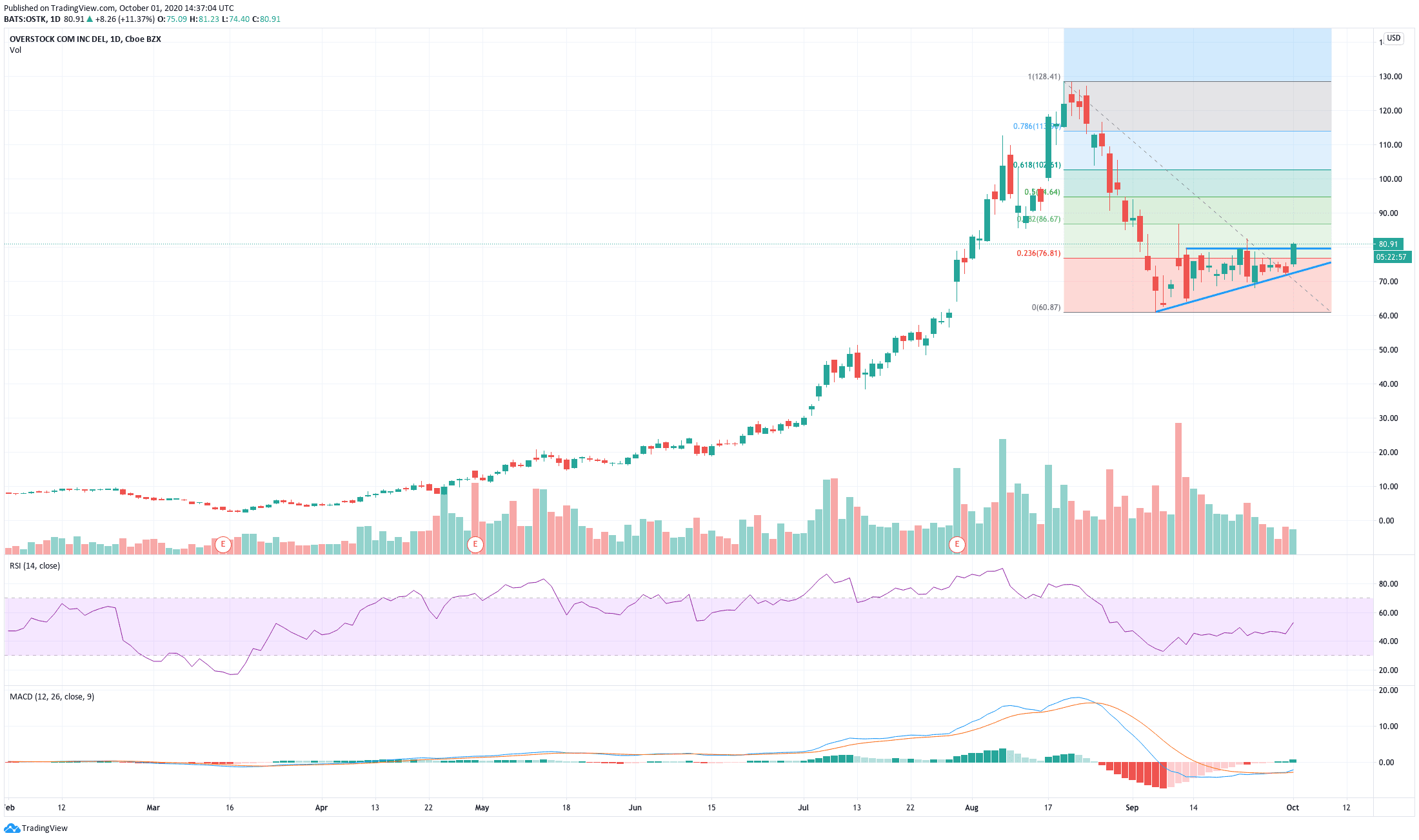 From a technical standpoint, the stock rose more than 11% during Thursday's session toward its 50-day moving average at $84.09. The relative strength index (RSI) remains neutral with a reading of 52.76, but the moving average convergence divergence (MACD) could see a near-term bullish crossover. These trends suggest that the stock has plenty of room to run if the bullish uptrend continues over the coming sessions.

Traders should watch for a breakout from the 50-day moving average at $84.09 toward Fibonacci resistance at $86.67 over the coming sessions. If the stock breaks out further, traders could see a move toward the next Fibonacci resistance level at $94.64. If the stock moves back below its ascending triangle breakout, traders could see a retest of support levels near $72.80, although that scenario appears less likely to occur.

Overstock.com shares moved sharply higher after Wedbush added the stock to its Best Ideas List and reiterated its Outperform rating and $92.00 price target. With a moderate RSI and a bullish MACD crossover, the stock could have more room to run over the coming sessions.