It was taken at the Kremlin in 2006, when the tycoons and their business empires seemed nigh unstoppable. 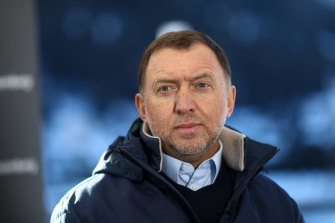 Oleg Deripaska’s rise to prominence as “Putin’s favourite industrialist” has been credited to his ruthless streak – as well as alleged criminal activity.Credit:Bloomberg

Both men amassed incredible fortunes in the wake of the Soviet Union’s collapse and – perhaps more crucially – long adhered to Putin’s cardinal decree to businesses: stay out of politics.

Now Deripaska cuts a greatly diminished figure since, in his own words, US sanctions imposed four years ago wreaked “utter devastation” on his wealth and reputation.

Shunned and isolated by the West, and with no protection from Putin, Deripaska’s tale is a cautionary one for Abramovich and other oligarchs who could soon face sanctions over the invasion of Ukraine.

Professor John Heathershaw, a kleptocracy researcher at Exeter University, says the point of sanctions is to make life as difficult as possible for those in Putin’s orbit, in the hope that by making them desperate, the dictator’s power base will be eroded.

“Putin’s attitude to them at the moment is basically that they should suck up the pain and do their patriotic duty to support Russia,” he adds.

“That is part of the bargain in kleptocracy: if the state takes pain then so do the oligarchs.”

Deripaska’s rise to prominence as “Putin’s favourite industrialist” has been credited to his ruthless streak – as well as alleged criminal activity.

The softly spoken tycoon was born in Siberia in 1968 but raised by his grandparents in Krasnodar, a Cossack village in the south, after his widowed mother left home to find work.

He was drafted into the Red Army before graduating Moscow State University in 1993 with a degree in nuclear physics, just as Soviet Russia was collapsing.

At that time, Deripaska has said he asked himself every day: “How do I get to buy food and keep from starving?”

The details of what happened next, as with much of this period in Russian history, are sketchy.

What is clear is that Deripaska went into business in Siberia, eventually becoming co-owner of an aluminium factory as the infamous “aluminium wars” began. He is said to have sometimes slept on the shop floor to fend off potential hostile takeovers, and lifted production by crushing local mafia.

Reports from the time document how mob bosses and businessmen wound up dead as different parties fought for control of key smelters. Deripaska has always maintained he avoided the gang wars.

Evidently, his strategy worked – the tycoon emerged in a strengthened position.

“Putin’s attitude to them at the moment is basically that they should suck up the pain and do their patriotic duty to support Russia.”

In 2000 Deripaska teamed up with Abramovich when the pair merged businesses to create Rusal. It captured most of Russia’s aluminium industry at a stroke and created one of the world’s biggest metal producers. Two years later Deripaska bought out Abramovich.

Both men studiously observed Putin’s ground rules, who made it clear he would not tolerate rival power after becoming president in 2000.

On his 240ft yacht, Queen K, he entertained former Labour business secretary Lord Mandelson and future Tory chancellor George Osborne. Osborne later said the meeting, at which it was claimed he sought a political donation, was a “mistake”.

Briefly, it almost came crashing down as aluminium prices went into freefall during the financial crisis and Rusal breached loan agreements. Through tough negotiations with his banks, however, Deripaska restructured borrowings and salvaged his businesses.

En+ Group, which part-owned Rusal and was controlled by Deripaska, floated in London in 2017 with a value of $US8 billion. A year later he was worth a mighty $US6.7 billion, according to Forbes.

“But equally, I think that throughout his career, Deripaska has been very adept at following who’s rising, who’s falling, who’s close to Putin.

“He’s by no means Putin’s best friend. But I think the president recognises that here is a successful business and somebody who is valuable to the Russian state.”

Deripaska has previously acknowledged his business depends on goodwill in the Kremlin.

“If the state says we need to give it up, we’ll give it up,” he told the Financial Times in 2007. “I don’t separate myself from the state. I have no other interests.”

Yet it was these links that made Deripaska a target in 2018. In retaliation for “malign” Russian activity around the globe, the White House banned businesses and banks from having any dealings with the oligarch, and attempted to seize some of his assets.

American officials cited a string of his alleged criminal activities, including “threatening the lives of business rivals, illegally wiretapping a government official, and taking part in extortion and racketeering”, as well as links to organised crime. 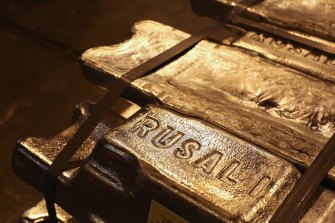 In 2000 Deripaska teamed up with Roman Abramovich when the pair merged businesses to create Rusal. He later bought out Abramovich.Credit:Bloomberg

They also claimed he was compelled by Putin to invest $US800 million in a sports complex for the Sochi 2014 Winter Olympics and helped to launder money for the president.

While Deripaska has always denied any wrongdoing – a spokesman told The Sunday Telegraph the US allegations were “baseless” – the sanctions had a chilling effect on his interests.

Luxury homes he was linked to in Washington DC and New York were raided by FBI investigators, banks said he would have to close accounts, while companies such as Rusal and En+ were suddenly forced to wrangle with the possibility of no longer being able to do business with Western companies.

Eventually, Deripaska reduced his stakes in Rusal and En+ to minority holdings, allowing sanctions on the companies to be lifted. Lord Barker, the former Tory minister who is chairman of En+, led the PR and lobbying effort for this.

The sanctions remain in place on Deripaska personally, despite an appeal in which he argued they had wreaked “utter devastation” on his reputation and his finances. One Russian bank executive who worked with Deripaska described the sanctions in the FT as “the worst thing that has ever happened to him in his entire career”.

Today Deripaska’s fortune sits at $US2.9 billion, just a tenth of its peak – and his interests risk being squeezed further by fresh sanctions over Ukraine in the UK and EU. Amid the turmoil, he has broken cover as one of the oligarchs to speak out, calling for peace talks to begin “as fast as possible” while also criticising “state capitalism” in Russia.

“If this is a real crisis then we need real crisis managers and not fantasists,” the 54-year-old wrote on messaging app Telegram. His yacht, meanwhile, has been spotted seeking refuge in the Maldives, safe from US extradition requests.

For Deripaska and his fellow oligarchs, it seems champagne and smiles are now in short supply.