In a matter of hours, the world order has turned drastically less favourable for the Western democracies. 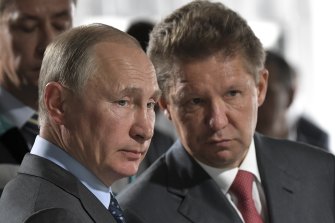 We wake up to the sobering reality that Russia is too pivotal for the international trading system to punish in any meaningful way. It influences or determines everything from bread in the shops, to petrol for Europe’s homes and power plants, to supply chains for aerospace and car plants, or soon will do if Kyiv falls.

Who knew that almost 90 per cent of Europe’s imports of rapeseed oil comes from Ukraine, or Spain’s jamon iberico depends on grain feed from the black earth belt of the Ukrainian steppe? Ukraine turns Putin’s neo-Tsarist empire into the Saudi Arabia of food, controlling 30 per cent of global wheat exports and 20 per cent of corn exports.

It is not just Brent crude oil that has spiked violently, hitting an eight-year high of $US102. Aluminium smashed all records this morning. Chicago wheat futures have hit $US9.32 a bushel, the highest since the hunger riots before the Arab Spring.

Do not confuse this with inflation. Rocketing commodity prices are a transfer of wealth to exporters of raw materials. For Europeans at the sharp end, it acts like a tax, leaving less to spend elsewhere. It is deflationary for most of the economy. If it continues for long, we will slide into recession.

So while there is brave and condign talk of crippling sanctions against Russia, it is the West’s pain threshold that is about to be tested. My presumption is that Fortress Russia will endure this contest of self-reliance more stoically than Europe’s skittish elites.

Sanctions are of course imperative as a political statement. The West would be complicit if it did nothing. But the measures currently on the table do not change the equation.

The debate in British parliament over whether to hit a few more oligarchs or restrict London access for more Russian banks has bordered on parody: Brits talking to Brits in a surreal misunderstanding of raw geopolitics, as if Putin was going to give up his unrepeatable chance to snatch back Kyivan Rus and shatter the post-Cold War dispensation of Europe because David Lammy is vexed by golden visas.

Nor does the temporary German suspension of Nord Stream 2 change anything. The pipeline was never going to supply extra gas this decade. The Kremlin’s purpose was to reroute the same Siberian gas, switching it from the Ukrainian corridor to the Baltic, depriving Kyiv of self-defence leverage. Once Putin controls Ukraine, Nord Stream 2 instantly becomes irrelevant. 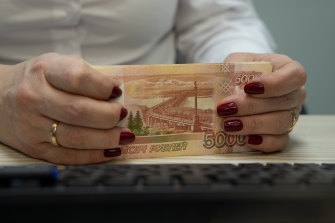 The decline in the ruble does not have as drastic effect on the Russian economy as it appears.Credit:Bloomberg

The cardinal error was made in June 2015 when Germany went ahead with the bilateral pipeline just a year after the annexation of Crimea, signalling that the first anschluss of 21st century Europe would go unpunished, or worse, that it would be rewarded with a strategic prize. If you want to date the death of a sovereign democratic Ukraine, it was that merkantilist decision. Royal Dutch Shell was an abettor. Putin got our measure.

The 36 per cent fall in the Moex index in Moscow means that Western investors with a Russian portfolio through pension funds or ETFs have lost money. It does not mean that Russia is being forced to its knees, as some would have it.

Nor does the modest decline in the rouble imply unmanageable economic stress. Russia’s exchange rate mechanism is designed to let the currency take the strain, cushioning the internal budget against shocks.

Russia is sitting on $US635 billion ($887 billion) of foreign exchange reserves. It has a national debt of 18 per cent of GDP, one of the lowest in the world. It has a fiscal surplus and does not rely heavily on foreign investors to finance the state. This renders US sanctions against new issuance of sovereign bonds a mere nuisance.

The Kremlin is enjoying a windfall gain from commodities. Benchmark gas futures contracts (TTF) for March have hit extreme levels of €120 MWh. Russia is earning $US700 million a day from sales of oil to Europe and to the US, which needs heavy Urals crude to replace sulphurous Venezuelan barrels for its refineries.

The harsh truth is that Europe would spiral into crisis within weeks if flows of Russian gas were cut off – by either side. The short-term loss of revenue for the Kremlin would be a small fraction of Russian gold, euro, and dollar reserves. There is no symmetry in this. Whatever the rhetoric, energy business as usual will proceed.

The US and Europe can and will enforce a technology blockade, restricting Russia’s access to advanced semiconductor chips, acting in tandem with Taiwan’s TSMC and Korea’s Samsung. This will hurt but it will take time. Russia has stockpiles. It has its own producers able to make mid-level chips down to 28 nanometres.

China may be irritated by how far Putin has gone in Ukraine but it will not join Western sanctions. Nor will it stop Chinese companies supplying chips to Russia through deniable middlemen and plugging some gaps in technology. Putin can reasonably calculate that Western zeal for sustaining this hi-tech embargo will wane before it does irreversible damage to Russia.

Now we face a reconstituted Russian empire in tooth claw, as far West as the Carpathians, with a stranglehold on the raw materials of our existence. None of this was inevitable. It is the result of systematic policy failure.

Europe has vetoed expulsion of Russia from the Swift nexus of global payments for fear of the systemic blowback into its own banks, and because it would have made it hard to pay for Putin’s oil, gas, metals and grains – leaving aside the risk that Russia might go all the way up the retaliation ladder.

The US itself is ambivalent over shutting down Swift because it would accelerate the de-dollarisation of global finance. If the US plays its trump card, it risks losing the card. China and Russia already have their own payment systems that could be linked for bilateral trade.

So one watches the Western pantomime over sanctions with a jaundiced eye, knowing that almost everything being discussed is largely beside the point, and that only military strength matters when push comes to a 200,000-man military shove.

The errors that led to this lie in years of European disarmament, the result of both wishful thinking by a complacent elite and because of fiscal austerity imposed by EU commissars during the eurozone crisis, with no regard for the larger strategic picture.

It is the fruit of periodic “resets” in relations with the Putin regime, invariably forgiving his sins, and dressing up commercial self-interest as if it were an attempt to lure him away from a Chinese axis of autocracies. The final trigger was Joe Biden’s decision last July to override congressional sanctions against Nord Stream 2, selling out Ukraine in a deal with Angela Merkel. 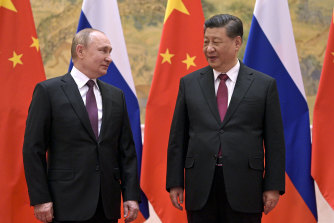 China may be irritated by how far Putin has gone in Ukraine but it will not join Western sanctions.Credit:Pool Sputnik

President Biden thought he could “park” Russia on one side and focus on China. He appointed a known Russophile as a key adviser on Russia. He neglected to appoint a US ambassador in Kyiv, long leaving matters in the hands of a junior with a taste for the quiet life, to the point of toning down cables to the White House that might have raised alarm. Putin drew the conclusion that this was his moment to strike.

We can only pray for brave Ukrainians fighting without air cover against crushing military might. More Stinger and Javelin missiles would have helped enormously a few months ago but it is almost certainly too late now to change the outcome by shipping out weapons.

The West must fall back to the next line of defence, the Nato line from Estonia to Romania, and face the long arduous task of military rearmament.

It would have been easier and wiser to stiffen a democratic Ukraine while we could. Now we face a reconstituted Russian empire in tooth claw, as far West as the Carpathians, with a stranglehold on the raw materials of our existence. None of this was inevitable. It is the result of systematic policy failure.