Labor’s extra $5 billion in funding for childcare – one of its largest new policy commitments – is a big deal for young families. It will give their household finances a major boost, and enable more women to enter the workforce or increase their work hours after it comes into effect from the middle of next year.

Participation rates for women in the paid workforce remain almost 10 percentage points below that of men, with the gap beginning as women enter child-bearing age, says Sarah Hunter, partner and senior economist at KPMG. 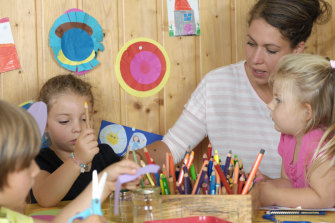 Parents will be paying less in child care fees from the middle of next year under Labor’s new policy.Credit:Alamy

“Reducing the cost of childcare, and therefore reducing a barrier to work, is a welcome step towards enabling women to fully participate in the labour market,” Hunter says.

The childcare policy no doubt resonated with young voters during the election campaign, particularly women with high earning potential.

According to a poll by women’s media outlet Mamamia, about 14 per cent of the more than 5000 people surveyed said childcare was one of the main issues affecting their decision at the federal election.

The new childcare subsidies phase out as family income rises, but only gradually.

‘The new policy broadens the subsidy to almost all families who use childcare… regardless of the number of children, their ages, or family income.’

The Grattan Institute says the government’s new policy broadens the subsidy to “almost all families who use childcare… regardless of the number of children, their ages, and the family income”.

The institute says as well as helping families with two or more children in care, Labor’s policy also increases the subsidy for a family’s first child in care.

The institute provides a case study of what it could mean for a couple with household income of $160,000 with two young children.

Under the new arrangements, the parents would pay $46 a day for both children from the middle of next year; assuming they pay the average day care cost of $110 per child.

They were paying $99 a day for both children last year, and have been paying $66 a day since March 7 – after the subsidy for the younger child was increased.

There is much evidence that the cost of childcare is the biggest factor in the lower participation rate of women in the workforce.

The institute estimates that Labor’s policy would result in about eight per cent more hours being worked by secondary household earners with young children.

Important as affordable childcare is, there are other non-economic factors that prevent women from working. One is the need for better sharing of unpaid work at home.

However, studies show a slow but positive shift taking place in the sharing of unpaid work between men and women, particularly among younger couples, but women still do significantly more hours of domestic chores than men.

Other factors preventing women from taking the amount of paid work they would like includes their tendency – particularly older women – to undertake the majority of the caring for elderly and ill relatives.

KPMG’s Hunter says to lock-in further gains, the government would need to support flexible working across all sectors, and improve the quality of childcare before and after school.

It can also do more on superannuation reform, to enable women to close the gender gap with men, she says.

The new government also plans to legislate 10 days of paid family and domestic violence leave, and provide funding for 500 new community sector workers and $100 million to increase the supply of crisis accommodation.