Donald Trump has been an unmitigated disaster for Brexit. He has contaminated the brand. By hijacking Britain's pursuit of sovereign self-government for his own mischievous purposes, he linked the Brexit cause to four years of Trumpian assault on civility and the world's institutions. Anybody who follows global commentary knows that the reputational damage has been calamitous.

There is a Burkean conservative case against a restless EU project that is forever seeking to accrue more power and keeps disturbing settled practice with one vaulting treaty after another, mostly on thin popular consent – or, as with the Lisbon Treaty, against explicit refusal of consent. 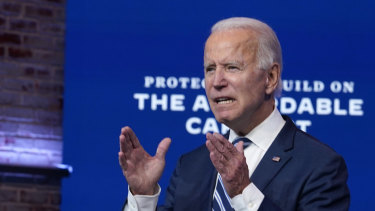 Joe Biden may be a breath of fresh air for the Brexit process. Credit:AP

There is a liberal, globalist, free-trade case against an EU that is more protectionist and hostile to innovation than its defenders admit, and less green than it pretends.

There is a left-wing case against an EU captured by corporatist elites, with a "neo-liberal" austerity architecture set in stone under the acquis, making it impossible for any genuinely radical government to push through transformational change ever again. It outlaws the sort of Roosevelt reflation that Joe Biden proposes for America.

There is a constitutional case against an EU with its confederate lines of accountability, uneasily joined to federal bodies of immense power – commission, supreme court, central bank – that operate beyond democratic oversight. There is a case that Britain's position as a non-euro member is unsustainable in an EU constantly creating fiscal machinery to shore up a dysfunctional monetary union.

Yet the world knows none of this. All has been conflated with Trumpism because that is an easier narrative. It is why even a well-informed politician such as Mr Biden could slip into caricature, calling Boris Johnson an "emotional and physical clone of Donald Trump".

Mr Biden no doubt regrets this comment. It is patently untrue. The Prime Minister has nothing in common with Donald Trump, other than a willingness to break crockery from time to time. His intellectual range, his multicultural tastes, and his ecological streak, are of his own kind.

This is not to deny that there was a darker Trumpian element to Brexit that pushed numbers over the top in June 2016. But it was not the essence of Brexit. A long list of EU states have a bigger problem with far-Right nativism than the UK. As a matter of raw realpolitik, the only redeeming feature of Mr Trump's identification with Brexit – or so it seemed – was that the prospect of a fast-track US trade deal would leave the EU with a stark choice: either agree to a "Canada-style" relationship with the UK on normal terms; or risk losing the UK into the American economic orbit. It came to nothing.

With Mr Trump on his way out, we can start to decontaminate the Brexit brand and reframe British independence within the normal parameters of diplomacy.

Mr Biden will have been briefed that Borisian Britain is aligned with his views on: the Paris climate accord; funding for the World Health Organisation; the Iran nuclear deal; and the democratic front against the Sino-Russian strongman axis. 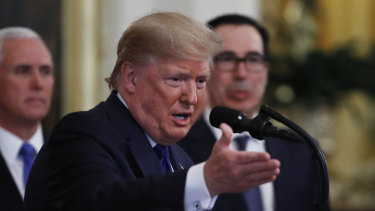 Donald Trump hasn’t been helpful for the Brexit process.Credit:AP

It is true that Brexit removes a close US ally from the top table of EU decision making but it does not therefore follow that this devalues the special relationship and makes the UK "less useful" to Washington, or that Mr Biden will fly over a forgotten London to the hotspots of Berlin and Paris.

The flip side of the coin is that the EU will become an even more prickly animal. Its Gaulliste push for "strategic sovereignty" in defence will take on stronger anti-American undertones.

Mr Biden will, like other presidents before him, find that when push comes to shove, the UK is a reliable soulmate and the EU is not. Indeed, he already knows this from 50 years at the heart of US foreign policy. He will face a tray of files on his Oval Office desk marked "Europe being bloody difficult", such as the Molotov-Ribbentrop gas pipeline (Nord Stream 2) intended to undercut Poland and Ukraine and strengthen Vladimir Putin's energy stranglehold, all with German collusion.

He knows that the EU plays it both ways with China, hoping that it can straddle – and profit – as a third force in global affairs, while the two superpowers struggle for ideological supremacy. But refusal to take sides between the democratic West and Xi Jinping's totalitarian nightmare is no longer a respectable option. London and Washington at least see eye to eye.

Mr Biden will be exasperated by the collapse of the Data Privacy Shield agreement, ending the free flow of data across the Atlantic because the EU deems US protection to be inadequate. He knows that the EU's push for "technological sovereignty" is intended to lock digital data inside the EU bloc rather than letting it leak into the cloud under the control of Microsoft, et al.

Claims that Biden will seek a trade deal with "big fish" Europe before bothering with "minnow" Britain skips over the fiasco of the TTIP transatlantic talks during the Barack Obama years. They ran aground over farm goods and food standards. The EU wants things all its own way: access for its industrial exports; but no access for US agricultural exports. Fresh talks today would be even more futile. The Greens are now a larger force in the European Parliament.

The fact that the next president understands the Good Friday Agreement – unlike most EU leaders – is a help, not a hindrance. He knows that it depends on both communities and furthermore that heavy-handed misuse of the Irish Protocol by the EU could itself be a threat to stability, a point brought home this week by the joint DUP-Sinn Fein letter to Brussels warning of food shortages.

Mr Biden's initial, irascible reaction to the UK's Single Market Bill suggests that he may not be fully aware of the provocations that led to this legislation. He will be guided by Dublin but he will also see through Brussels humbug soon enough, once his team has mastered the dossier.

My advice to Boris Johnson is let the Lords quietly finish off the Bill and look for other remedies if the EU tries to close its legalistic trap, exploiting the fine print of the protocol to extend state aid and regulatory control over great swathes of the UK economy. You have to pick your fights with care.

British-American relations were close to rupture after the Suez crisis in 1956. The election of America's first Irish Catholic president four years later ushered in the glory days of the special relationship.

John Kennedy got on swimmingly with a Tory toff. We may look back and find that Joe Biden is the best thing that ever happened for Brexit.