The democratic West did not lose the pandemic after all. The US may well emerge in better fundamental shape from the events of the last 18 months than Xi Jinping’s China. This is an enormous geopolitical upset.

It was universally assumed after waves one and two that the chaotic, ill-prepared states of North America and Europe had suffered an irreparable blow to their collective prestige, and a concomitant loss of global economic caste. We can see in hindsight that they suffered neither.

Jiang Jinquan, Xi’s propaganda chief, declared that Beijing’s success in stamping out COVID-19 with seemingly minimal economic damage had shown “the superiority of China’s political system”. The Communist Party believed that China’s sorpasso had been pulled forward by a decade and was henceforth unstoppable. 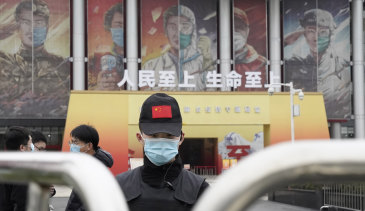 Kishore Mahbubani, the prophet of Eastern ascendancy, said COVID marked the definitive start of the Asian Century. The pandemic would accelerate the shift to a “China-centric” global system where the enfeebled white man would have to learn his new place. Deference to Western societies and values would be “replaced by a growing respect and admiration for Eastern ones”. It made sense at the time.

A year later it is far from evident. American and European vaccines are the miracle cure sought by everybody. Japan’s vaccination drive has been strangely inept and nine prefectures covering 50 per cent of GDP are still under a state of emergency. A fourth wave has filled hospitals, and the Indian Delta variant has again thrown the Olympics into doubt. Japan’s economy remains stuck in recession.

“The perception of China as the great winner has turned around. The momentum is now on the side of the Western liberal democracies.”

Those who relied heavily on Chinese vaccines have grown wary of large claims and opaque science. Chile vaccinated fast and early with Sinovac, and Hungary with Sinopharm. Both were overwhelmed by fresh waves of hospitalisation and death. Nobody believes trial data any more.

China is belatedly vaccinating its own population as highly infectious variants keep popping up. Parts of Guangdong are again under draconian curbs.

George Gao, head of China’s Centre for Disease Control, says his country’s vaccines “don’t have very high protection rates” and may have to be mixed with Western mRNA technology to contain further waves of contagion. Which raises the question: will China have to rely on repressive surveillance measures long after the West has fully reopened?

“The perception of China as the great winner has turned around. The momentum is now on the side of the Western liberal democracies,” said Professor Ho-Fung Hung at Johns Hopkins University. “The US and the UK have the pandemic under control and their vaccines are very effective. It is China that is now struggling,” he said.

The red-hot US economy has already regained its pre-pandemic levels of GDP but has done so with 8 million fewer workers, evidence of rocketing productivity. Lockdowns seem to have condensed seven years of digital take-up into a single year. Who would have imagined that stopping people going to work would be such a Schumpeterian catalyst?

The OECD’s global outlook this week made an astonishing forecast. It suggested that the US economy would surpass even its pre-virus growth trajectory as soon as the third quarter. By the early 2020s it will have shifted into a higher gear altogether, thanks to Joe Biden’s investment blitz and technological rearmament.

Capital Economics says slumping productivity and the ageing crunch will probably stop China catching up with the US for decades to come. The workforce peaked in 2017 and is already shrinking. The decline will accelerate to 0.5 per cent a year after 2030.

“If China doesn’t overtake the US by the mid-2030s it probably never will,” said Mark Williams, the group’s chief Asia economist. “And if it does overtake, it may struggle to hold on to first place.”

The recent census revealed that the population is contracting at a faster rate than either the United Nations or Chinese demographers thought. The three-child family rule introduced this week comes too late to reverse a pattern now deeply lodged in Chinese society.

China is adept at stimulating short-term demand in a crisis. The state-run banking system enables it to let rip fast with credit. But the extra output created by each yuan of loans has slumped since the halcyon days of 2008-2009. While the debt ratio has risen to almost 340 per cent of GDP, the economic growth needed to service these liabilities has dropped from 10 per cent to nearer 5 per cent in a decade, with 2 per cent on the cards by the late 2020s.

“People are naive to think China has found the elixir of perpetual growth and will always come roaring back. It is just as imbalanced as it was before the pandemic,” said George Magnus from Oxford University’s China Centre.

Its catch-up model of state-led investment is patently no longer fit for purpose. The World Bank says the growth rate of total factor productivity (TFP) – the relevant gauge of the economy – has fallen to 0.7 per cent from around 3 per cent before the global financial crisis. It has converged with Western levels of TFP performance at a stage of its economic development where it should be much higher.

Premier Li Keqiang argued a decade ago that China would end up in the “middle income trap” unless it ditched the top-down model and embraced something much closer to liberal pluralism. He was overruled. Xi has instead doubled down on police surveillance and the state-owned behemoths, the Party’s machine of patronage and control. He is opting for a “dual circulation” strategy.

The risk for China is that the investigation of the Wuhan lab theory by the US intelligence agencies validates what has until now been deemed a conspiracy theory.

If the Chinese state is found to have created this virus, covered up the leak, and then allowed airline passengers to seed it around the world, the consequences will be catastrophic. The year that China claimed ascendancy may prove to be its annus horribilis.