Hilton Worldwide Holdings Inc. (HLT), the hotel and resort giant, has continued to struggle with the global pandemic. Since the crash back in February driven by COVID-19, this is one stock that has failed to return to its previous peak. Instead, shares are currently trading about 20% below that peak.

The stock has seen strong rallies, but as travel is slow to pick back up, it hasn't been able to break out back to new highs. That has left Hilton stock trading in one of my favorite price patterns – the ascending triangle.

This is a price pattern that has a horizontal resistance level (in red below) at $94 per share for Hilton and a rising support level (in green below). Take a look: 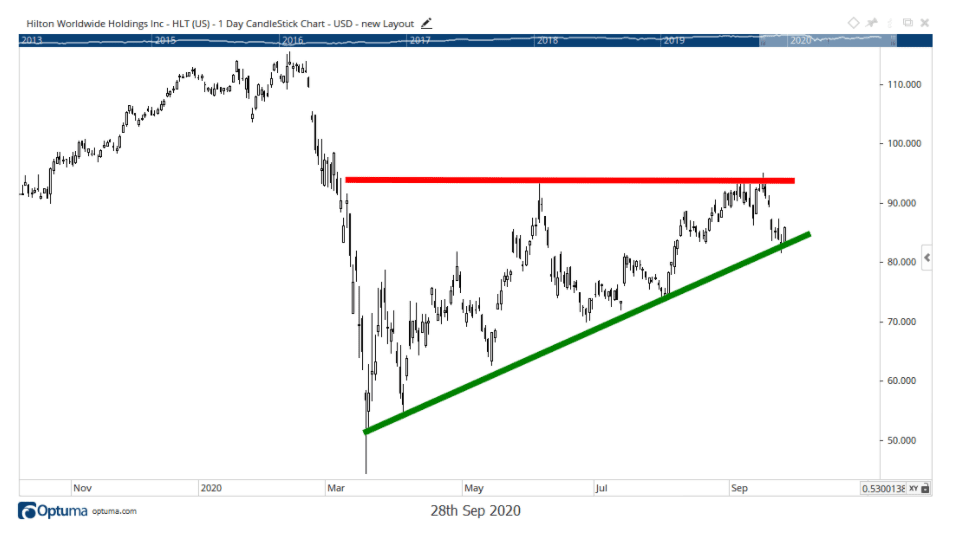 I love these price patterns because it tells us so much about the stock. First, we know the key levels that would mark a breakout point – the red resistance line and green support line.

We also have an expected move by taking the height of the price pattern. The top is at $94, and the pattern begins around $52, giving it a height of $42 per share. That's how much we can expect the stock to pop or drop once we get a breakout. Depending on exactly where the breakout occurs, we could be looking at a 45% to 50% move in the stock.

Now, it's always better to wait until the breakout occurs to try to capitalize on the rest of the price move playing out. But triangle patterns tend to be continuation patterns. This means that we would expect the breakout to occur in the same direction in which the shares were trading before the pattern occurred.

Seeing as how the stock has not yet returned to its previous peak, this tells us that shares were falling before they consolidated into the ascending triangle pattern. Based on the tendency for these patterns being continuations, we can now expect the stock to break lower and head to a low of $41 per share in the coming months. That's more than a 50% plunge from the stock's current price.

Hilton Worldwide shares are stuck in an ascending triangle pattern as the company continues to deal with a global pandemic. This tells us that we can expect about a 50% pop or drop in the stock in the coming months. Considering most triangle patterns are continuation patterns, the odds favor this stock breaking out to the downside from here. That would set the stock up for a 50% crash.