Why wages can’t keep up with inflation

The April inflation report was expected to be a harbinger of good news for the U.S. economy, evidence that sky-high consumer prices had finally started to fall.

Instead, prices actually rose more than expected in April, suggesting that inflation will persist at elevated levels for some time, creating a political headache for President Biden and forcing the Federal Reserve to chart an even more aggressive course to cool demand and bring inflation down.

While the Labor Department reported that the headline inflation figure did in fact moderate for the first time in months, the consumer price index still soared by 8.3%, a markedly fast pace that is close to a 40-year high. At the same time, a different gauge that measures prices excluding food and energy – more volatile measurements – jumped by 0.6%, exceeding all estimates.

"This is another upward inflation surprise and suggests that the deceleration is going to be painstakingly slow," said Seema Shah, chief strategist at Principal Global Investors. "The focus will soon start shifting from where inflation peaked to where it plateaus, and we fear that it will plateau at an uncomfortably high level for the Fed."

Some of the largest contributors to inflation in April included rent, food, airfare and new vehicles, which pushed prices higher even as disruptions from the COVID-19 pandemic and the Russian war in Ukraine started to fade.

"The peak of inflation may be behind us, but today’s CPI report points to a long, slow descent or maybe even a plateau around 8% until prices start to drop significantly," said Robert Frick, corporate economist with Navy Federal Credit Union.

The silver lining in the report – that annual inflation declined last month – has been clouded over by an increase in core inflation and soaring housing costs that likely require a policy response, according to Joe Brusuelas, RSM chief economist.

While Brusuelas said that inflation in this business cycle likely reached its zenith in March, when the CPI hit 8.5%, the modest decrease in April is unlikely to ease the financial burden on U.S. households that are grappling with sticker shock for the first time in a generation.

"One does not get the sense that this is going provide any relief to households experiencing a loss in purchasing power and policymakers who will attempt to restore price stability without causing a recession," he said. 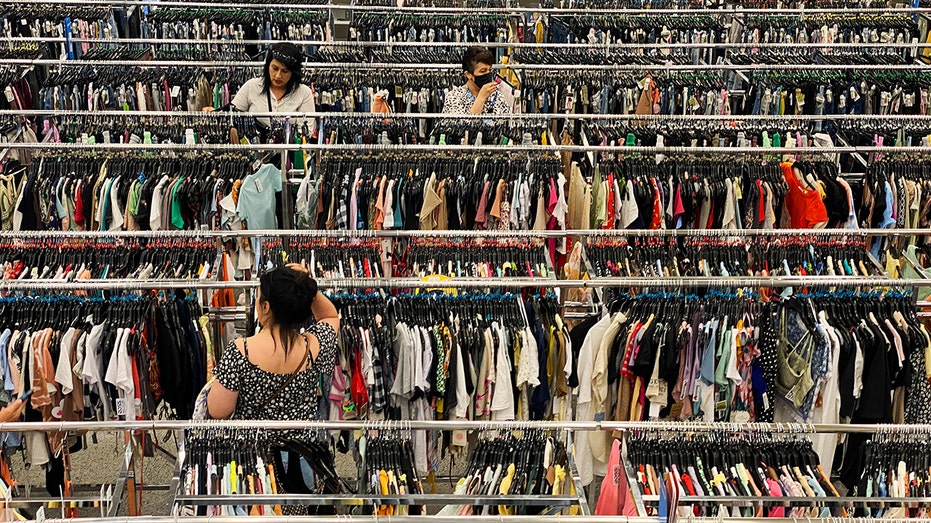 Customers browse racks of clothing as they shop inside a discount department retail store in Las Vegas, Nevada, on May 7, 2022.  ((Photo by Patrick T. Fallon/AFP via Getty Images) / Getty Images)

The inflation spike has been bad news for President Biden, who has seen his approval rating plunge as consumer prices rose. Biden on Tuesday again blamed the price spike on supply chain bottlenecks and other pandemic-induced disruptions in the economy, as well as the Russian war in Ukraine. Most economists now agree that unprecedented levels of government stimulus, and a stronger-than-expected recovery from the pandemic, have also played at least some role in exacerbating the price spike.

The report is likely to provide little comfort to the Federal Reserve, which faces the tricky task of cooling demand and prices without inadvertently dragging the economy into a recession. Policymakers raised the benchmark interest rate by 50 basis points last week for the first time in two decades and have signaled that more, similarly sized rate hikes are on the table at coming meetings as they rush to catch up with inflation.

"Inflation is much too high, and we understand the hardship it is causing, and we are moving expeditiously to bring it back down," Fed Chairman Jerome Powell told reporters last week. "Assuming that economic and financial conditions evolve in line with expectations, there is a broad sense on the committee that additional 50 basis point increases should be on the table at the next couple of meetings."

The biggest question now is whether central bank officials can successfully tame inflation and stabilize prices without triggering an economic recession. Raising the federal funds rate tends to create higher rates on consumers and business loans, which slows the economy by forcing them to cut back on spending.

The Fed's hawkish pivot has exacerbated fears on Wall Street that a downturn is on the horizon, with Fannie Mae, Bank of America and Deutsche Bank all forecasting a recession in the next two years.

Powell has argued the labor market and consumer demand are strong enough to prevent a downturn.

"It’s a strong economy," he said. "Nothing about it suggests it’s close to or vulnerable to a recession."