The UK economy did not suffer a bigger contraction than the eurozone last year after all. The narrative of a particularly British fiasco is essentially untrue.

It never made sense that the UK’s output figures should have been exceptionally disastrous. We now have the data, and we can see more clearly that it never happened. It was a story of apples and oranges. 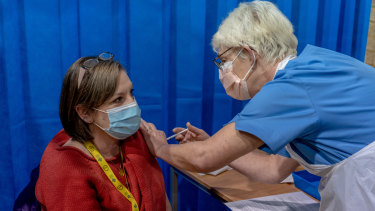 A nurse in Wales receives the COVID-19 vaccine: The shape, speed and logistical back-up for the UK vaccine rollout puts the country ahead of Europe.Credit:Andrew Testa/The New York Times

“The UK actually outperformed other countries in Europe slightly if you look at nominal GDP, and we’re expecting another outperformance this year,” says David Owen from the US bank Jefferies.

Confusion over past data is due to measurement models. The Office for National Statistics deducts a fall in visits to the doctor and reduced classes at school from accrued GDP. Most other countries do not. They tend to calculate extra health spending as a boost to GDP. Hence a giant anomaly.

What we have had is an epidemic of bogus quantification. The illusory effect will reverse on the way up. The UK’s headline growth figures will be flattered – and look ridiculous – by mirror-image effect.

What we have had is an epidemic of bogus quantification.

“A year from now annual growth could be in double-digits,” says Andy Haldane, the Bank of England’s chief economist. Households have amassed “accidental savings” of £125 billion ($224 billion) and have paid down consumer debts by £20 billion. Companies have a war chest of £100 billion. Mr Haldane thinks a large chunk of this money is going to flood back into the real economy rapidly.

The shape, speed and logistical back-up for the UK vaccine rollout pulls forward economic reopening by roughly three months relative to the eurozone. New company births have been surging. There were 201,820 business formations in the fourth quarter, a sign that Britain’s flexible labour and product markets are adapting very fast to the digital leap forward caused by the pandemic.

There is a risk that the recovery boomlet could fizzle out by the end of the year if Schumpeterians run amok or the Treasury reverts to austerity too soon. But that same risk applies in spades to Europe. The IMF warns that Germany, Spain and the Netherlands all have contractionary fiscal settings this year.

The Haldane forecast may be over-optimistic, but it is more plausible than the OECD’s dire projection. It expects the UK to languish at the bottom of the developed world this year. Output will be 6.4 per cent below pre-pandemic levels at the end of 2021 and still 3 per cent lower at the end of 2022.

Its French chief economist thinks France and Italy will pull far ahead of the UK this year. I am willing to take the other side of that trade with conviction, to use hedge fund parlance.

While Emmanuel Macron’s chief focus for weeks has been on how to outflank Marine Le Pen on the hard-Right over multiculturalism and Islamist ideology, he has allowed his country to drift into a vaccination crisis that entails huge economic cost. Just three million doses have been administered. The numbers protected are fewer because France is sticking to the double-dose rule. The rest of February will be used adding a little extra immunity with boosters, rather than broadening immunity as fast as possible. Large numbers at high risk will have no protection for a long time to come.

Some 35 per cent of new cases in France are the English variant, rising to 45 per cent in greater Paris and 80 per cent in Dunkirk. South African and Brazilian variants have broken out in the Moselle. Total new infections are 20,000 a day. It looks stable but French epidemiologists say this is wishful thinking. France has no chance of returning to normal economic life for several months.

Italy faces the same painful choices. The B117 variant is suddenly 18 per cent of cases. Health authorities are again calling for an immediate lockdown. Vaccination has been faster than in France but is constrained by the shortage of doses.

For the OECD to conclude that Britain will be left behind this year by France and Italy, it has to make calamitous assumptions about Brexit. No such calamity is occurring. The big container ports tell me that goods are flowing as normal. More ships are going directly from northern Spain to Liverpool and other ports, or from Antwerp to the Humber, instead of going by road. This is better for CO2 emissions and more efficient.

There was a January scare over truck loads through the English Channel but that is hard to separate from the other effects: stock-building before the Brexit deadline; people holding back until teething pains are over; and the B117 coronavirus variant. The worst has already subsided. “It is much-improved since mid-January,” said the Road Haulage Association.

Nissan will produce more batteries for its electric vehicles in the UK. That is a direct consequence of the EU’s refusal to grant the UK “diagonal cumulation” on Japanese parts under rule of origin thresholds. “Brexit, which we thought is a risk, has become an opportunity for Nissan,” its chief operating officer said.

There has been much focus on the immediate economic shocks of Brexit, but almost none on the silent offsetting effects.

This year is going to turn that perception upside down. The spotlight will be back on Europe’s woes.