Selina Flavius is one of a growing number of women in Britain who are talking about money – but as a black woman she faces two challenges. “We experience gender equality and the gender pay gap, which is more spoken about,” she says. “But there’s also the ethnicity pay gap.”

The 38-year-old founded the website Black Girl Finance last year to help others like her. “Some of it was societal and some of it was personal. I wanted to create a safe space where we could focus on our finances,” she says.

The ethnicity gap does not stop at pay – the inequality that begins there runs through everything involving money. Almost across the board people of colour are worse off than their white counterparts and, typically, black households face the biggest deficit. Compared with white households they have lower earnings and less cash in private pensions, investments or other assets to draw on.

Data shows that in the last year for which figures are available, black people had the highest unemployment rate of all groups; were most likely to have a household income below £400 a week; and, after Bangladeshi households, were most likely to claim income-related benefits. Only 8% of black pensioner families drew any income from a personal pension. 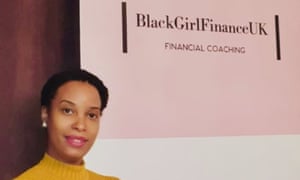 According to a recent report by the Runnymede Trust, Black African and Bangladeshi households have only 10p of savings and assets for every £1 of white British wealth.

Some of the issues are explained by the demographics of the community: black people are generally younger and live in cities, so may have higher living costs and have had less time to build up wealth. Plus, some pay gap figures reflect inequalities around education and opportunity.

Otegha Uwagba is a writer and the founder of Women Who. She is working on a book called We Need To Talk About Money, which will be published next year. She says people often make the argument that the pay difference is a result of people clustering around low-paid industries. “But even when you compare people with identical qualifications doing identical jobs in the same geographical area, there is still a difference in pay,” she says. “It’s hard to find any other reason for that beyond racism.”

She adds: “Why aren’t we doing the same thing with mandatory disclosures around the ethnicity pay gap as we have around the gender pay gap? Racism is a really ugly part of British history that people just don’t want to face up to.”

Cheryl Cole, the editor of DiversityQ, which promotes business diversity, says that only 11% of companies have published ethnicity pay reports and that they need to be made mandatory. A government plan to introduce this appears to have stalled and a petition asking for new laws has attracted more than 100,000 signatures.

It may not fix the problem entirely – figures show black workers are more likely to be agency staff than white workers and pay audits mask disparities between staff and outsourced workers. But it will shine a spotlight on the issues.

Getting people of colour into top jobs will help close the gap. This week a report co-authored by Cole highlighted the lack of diversity at the top of the UK’s largest companies. Among FTSE 100 companies, 62.% of board members are white males and they occupy 84% of executive directorships, according to the DiversityQ FTSE 100 board diversity report 2020. Fewer than one in 10 directors is black, Asian or minority ethnicity.

Cole calls the figures “very poor” considering the government has set a target for every boardroom to have BAME representation by next year. One of the problems is “lazy recruitment”, she says. “People continue to hire in their likeness – they recruit from the same small pool of candidates who went to the same small pool of universities and have the same background.”

Things are “dire” in fund management, says Cole. Of 100,000 employees, 10% identify as Asian and only 1% as black, and the industry has only 13 black portfolio managers, according to a Diversity Project report.

Cole says there is a lack of career progression within firms but also an underlying issue around expectation and experience. “As a person of colour, you often don’t realise there is the opportunity for you to do these jobs,” she says. “There are no role models – when you are at school they talk about considering something in the entertainment industry or something in sport … A lot of schoolchildren don’t know these jobs exist because their parents don’t do them and they don’t know people who do. They perceive there is no one who looks like them who has succeeded.”

Most people’s biggest asset is their home and Uwagba says she was shocked when she saw figures showing the low level of property ownership among black Africans. While 63% of families across England own homes, the figure is only 20% among black Africans. “When you think about how people are buying homes, especially in London, and how many are relying on the bank of Mum and Dad, you can see how income disparities are perpetuated through the generations,” she says.

“Money begets more money. Discrimination compounds things and wealth and income gaps are passed on to the next generation.” Even when the inequalities in pay are ironed out, it will be some time before all the other gaps are closed. 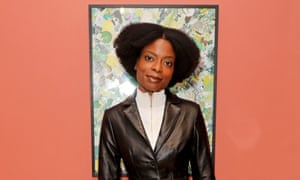 With fewer assets to pass down, the problem grows. It is not only the wealth that accumulates, but also the knowledge about how to make the most of your money.

While those from wealthy backgrounds may learn from their parents about building up assets, she says “you don’t have that generational knowledge passed down”. Her website is somewhere where women from similar backgrounds can share tips and help each other meet their goals. Many of the organisations she recommends are not specifically geared towards any community but she says it was the Black Investor 360 show that opened her eyes to investment opportunities.

Again, representation is important to show people that they have these chances, she says. “If you see people who look like you doing the things that you want to do, then that helps,” she says. “The women I speak to are very different – some have just left college or school and are starting out, while some are older than me and have maybe come into some money. Some of them have never seen a financial adviser and don’t know where to start.”

1) Research from the Runnymede Trust shows the vast differences in wealth and assets between households of different ethnicity. The figures show that that for every £1 a white British family has, black Caribbean households have about 20p and black African and Bangladeshi households approximately 10p. Accumulated assets offer a safety net when things go wrong and can be passed down through generations.

2) The English Housing Survey reveals the disparity in levels of home ownership between different communities. While 63% of households across the country owned their property in 2016-2018, the figures varied between ethnic groups. Almost three-quarters of Indian households were homeowners, as were 68% of white British households. At the other end of the scale, Black African (20%) and Arab (17%) ethnic groups had the lowest rates of home ownership.