Thousands of British businesses are braced for a "truly devastating" blow from Boris Johnson's second lockdown amid fears that the economy will collapse by 12 per cent this month.

Britain is teetering on the brink of a dreaded double-dip recession following the Prime Minister's ban on household mixing and non-essential travel coupled with mass pub and restaurant closures, experts at the National Institute of Economic and Social Research (Niesr) warned. 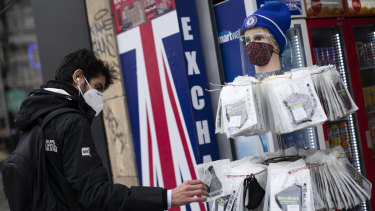 The UK is facing a “double-dip” recession.Credit:Getty Images

It is thought that the new measures to contain the spread of COVID will cost taxpayers billions of pounds, destroy swathes of companies and put millions of jobs at risk.

Dame Carolyn Fairbairn, director general of the Confederation of British Industry, said the crackdown is "truly devastating for business, for retailers, for manufacturers, for companies who have invested millions in making their workplaces COVID-safe".

Around 90 per cent of the recovery in hospitality firms since the UK summer could be wiped out, according to Niesr, while most other industries will lose roughly half of the growth they have clawed back since the first lockdown.

Niesr expects a 12 per cent drop in GDP in November – the second biggest monthly fall on record, behind only April when the last lockdown came in – with the economy shrinking more than more than 3 per cent from already low levels in the final quarter of the year overall.

It accused ministers of a chaotic approach to COVID which has left firms unable to plan ahead and repeatedly undermined hopes of a bounceback.

Adrian Pabst, of Niesr, said: "In times of radical uncertainty, such as with COVID and the Brexit deadline looming, it is reasonable to say that policy should be a source of some greater stability, some greater certainty.

"The way decisions have been made cannot be described as contributing any sense of certainty or stability."

But speaking at the organisation's annual conference, she said: "There are ways in which this lockdown is also much worse. Gas tanks are depleted. Batteries run down in so many businesses across the country – in retail, in hospitality. Our aviation sector absolutely on its knees. 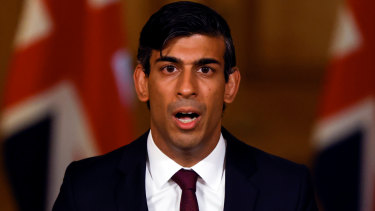 “I’ve always said we will continue to do everything we can to support livelihoods across the UK”: British Chancellor Rishi Sunak.Credit:Getty Images

"We're heading into winter, a bleak midwinter. This is the run up to Christmas. It's the most important time for so many firms." She criticised the Government's communications, warning "businesses can't act on the basis of speculation and leaks and surmise. This has to get a lot better".

The lockdown will heap pressure on jobs. The Institute for Employment Studies expects between 3.5 million and 5.5 million employees to be on furlough during November after the scheme was hastily extended, at an estimated cost of £8 billion ($14.7 billion).

The Government has extended the furlough scheme, and increased the Self-Employed Income Support Scheme for November to cover 80 per cent of trading profits instead of 40 per cent. It means the self-employed are in line for £4.5 billion from the Treasury. Rishi Sunak, the Chancellor, said: "I've always said we will continue to do everything we can to support livelihoods across the UK."

Government-backed loans are also being extended so businesses can apply until the end of January.

The cost of extra support combined with lower tax revenues from a smaller economy will send public borrowing surging above £400 billion this year, JPMorgan predicted. National debt has already climbed above 100 per cent of GDP for the first time since the Sixties.

Sir Keir Starmer, leader of the opposition, singled out Mr Sunak for criticism over delays in bringing in a lockdown.

Speaking to the CBI conference, he said: "Make no mistake, the Chancellor's name is all over this.

"His decision to block a circuit-breaker, to dismiss it as a 'blunt instrument' and to pretend that you can protect the economy without controlling the virus will now mean that businesses have to close for longer, more people will lose their jobs, and the public finances will be worse than they needed to be."

If the lockdown is extended beyond the initial four weeks, it could mean the economy keeps shrinking into 2021 and so meets the official definition of a recession – two straight quarters of negative growth.

Sven Jari Stehn, economist at Goldman Sachs, said: "A longer-lasting partial lockdown would result in negative growth also in the first quarter, pushing the economy into a double-dip recession."