Europeans have watched the slapstick spectacle of Britain’s “pingdemic” and drawn their conclusions: they will not let vaccine refuseniks queer the pitch for everybody else, or prevent the full reopening of the economy.

The unvaccinated will be shut out of normal life, progressively demonised, and stripped of civil rights for the greater good of the majority. A new political fault line is emerging in Europe. 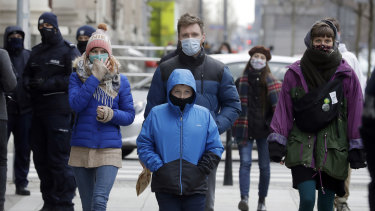 People walk on the streets of Warsaw, Poland, which has been hit by a sudden spike in new COVID-19 cases, as has much of central Europe and the Balkans.Credit:AP

If and when the Delta wave hits Germany in earnest – he fears 100,000 cases a day by September, just in time for the election – the unjabbed will face exclusion from restaurants, cinemas, stadiums and so forth. “The risk for everybody else is too high,” he said.

The lurch towards majoritarianism is taking hold. France’s Emmanuel Macron is ramming through mandatory vaccination for nurses and care home workers, as the first step towards compulsory jabs for broad sections of society. His draconian plan has been somewhat diluted in parliament after dissent from Left and Right.

The health pass for the vaccinated is already in force. You will not be able to sit down for a coffee and croissant in Paris without it, or go to La Comédie-Française, or get on a TGV train. France is split in two and this has political resonance in a country where vaccine rejection is endemic.

Over 160,000 protested on Saturday against the enveloping “health dictatorship”, some smashing up shops around the Champs Elysees.

Italy has had mandatory vaccination for healthcare workers since April and the unjabbed are prohibited from visiting relatives in care homes or entering hospital waiting rooms. These curbs are about to escalate with the new green pass. Italians will be barred from football games, concerts, etc, unless they have it.

Do the protests across Europe matter? The majority supports coercion in every country. It usually does when push comes to shove: that is why rights law is needed, however irritating it can be at times.

On this occasion the measures may violate the (non-EU) European Convention on Human Rights.

Council of Europe’s assembly fired a warning shot in May about creeping stigmatisation and compulsion by the back door. “If COVID passes are used as a basis for preferential treatment, they may have an impact on protected rights and freedoms. Such preferential treatment may amount to unlawful discrimination within the meaning of Article 14 of the convention if it does not have an objective and reasonable justification,” it said. 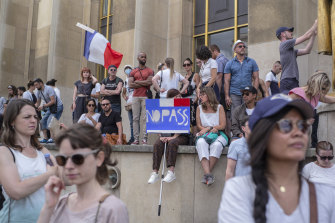 People attend a demonstration in Paris against the COVID-19 pass which grants vaccinated individuals greater ease of access to venues.Credit:AP

You could say that Europe’s big states have got themselves into this authoritarian cul-de-sac because they did not invest early enough in COVID vaccine capacity and were subsequently slow to roll out their campaigns.

They drifted through early summer and allowed the Delta variant to gain a foothold, just as they let the alpha variant stalk them last February. A narrative took hold that the UK was a special case: it had succumbed to the Delta wave because it stretched the dosing interval (deemed Borisian adventurism), and because the British rely more on the AstraZeneca jab.

As it turns out, they were wrong on both counts. The latest Oxford University study concludes that the immunity “sweet spot” for the Pfizer vaccine is an interval of eight weeks.

Either way, the UK’s moderate level of hospitalisation a full six weeks into the Delta wave speaks for itself.

This is not to say that the UK government has calibrated the reopening correctly or was right to end the mask ban on public transport and in supermarkets, given the report in Nature News that the viral load of the Delta variant is 1000 times higher than the original strain.

If the real life data confirm the pattern of stabilising cases into early August, the world will take stock. We can rule out any serious return to economic lockdowns or comprehensive travel bans in the rest of the OECD bloc (bar the zero-COVID hold-outs).

The recovery looks safe for now. The greater threat to asset prices is the onset of creeping structural inflation, forcing Anglo-Saxon central banks to hit the brakes.

But the emerging world still faces a humanitarian crisis of the first order. Fading immunity in rich countries means that we will need booster jabs much sooner than anticipated.

Europe and Britain will have to go through this whole cycle again and again. The economic winners of the next phase will be those that have their manufacturing plants and vaccine supply chains fully up and running before the winter wave hits. The next vaccine war could be even more acrimonious than the last one.