Defectors invariably paint their erstwhile regimes in the grimmest of colours. Cai Xia’s forensic broadside on the 100th anniversary of the Communist Party of China (CCP) is as grim as it gets.

Professor Cai taught for 15 years at the Central Party School, the sanctum sanctorum of the Communist elite and the motor engine of revanchist doctrine. The cadres learned that there can be no modus vivendi with “American imperialist wolves”.

Her long essay on the CCP’s ideological reflexes published by the Hoover Institution should be read with caution but it is nevertheless a seminal text for our time. It is both an exposé of the incorrigible character of this totalitarian beast but also an indictment of Western wishful thinking over 40 years of failed strategic engagement. 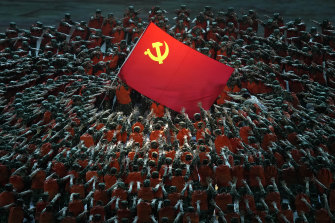 The Communist Party of China’s 100th anniversary show last month: The regime is implacably hostile towards the West.Credit: AP

You cannot engage with the CCP. The party is implacably hostile, because it sees the foreign democratic virus as a threat to its own internal control of China. “The two conflicting systems cannot be reconciled, and they cannot indefinitely coexist,” she says.

Nor does the CCP wish to coexist with the West any longer, having concluded (wrongly) from the global financial crisis in 2008 that the US is in irreversible economic and strategic decline, and that “socialism with Chinese characteristics” has shown itself to be superior. “It is the CCP that has unilaterally ruined the engagement policy, because it believes engagement has served its purpose and is no longer useful,” she said.

President Xi Jinping and the top cadres think they can overcome the Impossible Dilemma: achieving a vibrant, hi-tech economy under the 24-hour surveillance of an absolutist police dictatorship.

Historians will ultimately conclude that China suffered greater damage from the Lehman shock since the country resorted to promiscuous credit creation and industrial over-investment to avert social protest, clinging to a catch-up development model that was already past its sell-by date.

The smoking gun is found in a World Bank study of total factor productivity. It has fallen from 3 per cent growth in the early 2000s – the rate you expect in a catch-up economy – to near Western levels of 0.7 per cent.

President Xi Jinping and the top cadres think they can overcome the Impossible Dilemma: achieving a vibrant, hi-tech economy under the 24-hour surveillance of an absolutist police dictatorship.

I had assumed that Xi’s iron-fist policies at home and abroad were a break with the more emollient approach from Deng Xiaoping to Hu Jintao, when China seemed to be softening from a totalitarian to an authoritarian regime. Cai makes clear that the fundamental character of the CCP has been unchanging.

The party has merely dropped the facade and dispensed with Deng’s tactical dictum: “bide your time and hide your strength”. It has also acquired the means of totalitarian control that Hitler and Stalin could only dream of, whether face recognition technology or digital tracking through the Social Credit System.

The long list of Xi’s affronts, from the South China Sea, to the pitiless asphyxiation of Hong Kong, to the intimidation of Australia, to the Uyghur camps, are by now well-known, culminating in state-sponsored disinformation on COVID-19.

It has long been an article of faith among the Western establishment that Deng’s economic opening would bring political opening in its wake. Bill Clinton presented China’s accession to the World Trade Organisation as an instrument of democratisation. “The genie of freedom will not go back into the bottle,” he said. It is by now obvious that the West persisted with this false course for too long.

Cai’s contention is that the Communist regime is more brittle than it looks, like the Soviet regime before the end. “I recommend that the US be fully prepared for the possible sudden disintegration of the CCP,” she said.

It is not just the debt saturation, or the corruption, or the “insurmountable contradiction between exaggerated ideological propaganda and social reality”. She highlights the power struggle at the core. “Xi Jinping’s overly suspicious and narrow-minded personality has led to continuous purges inside the party, which have brought extreme dissatisfaction among the middle and high-level officials. Everyone feels unsafe,” she said.

The debate over regime change is taking shape in the West. The Atlantic Council floated the idea earlier this year in its “Longer Telegram”, modelled on George Kennan’s anonymous “Long Telegram” for Foreign Affairs in 1947, the blueprint for Soviet containment during the Cold War.

It calls for a US-led alliance to raise the cost of China’s predatory actions, exploiting fault lines within the regime to bring about “leadership change”, first by helping pragmatists to stop Xi perpetuating his rule beyond the 20th Party Congress in 2022.

“With a perfect combination of internal and external pressures, triggered by a series of acute systemic crises, the CCP may indeed collapse. It would, however, be foolhardy for US strategists to bank on it,” said the paper.

Former British diplomat Roger Garside goes further in China Coup: the Great Leap to Freedom, arguing that the CCP is bent on world supremacy and must be overthrown before it becomes powerful enough to act on its intentions. Garside said Xi has fatally misjudged the resilience of the democracies, like 20th century totalitarians before him. He has turned a well-meaning America into a determined enemy, awakening a slumbering giant before China is close to strategic parity. “No people on earth is less forgiving than the Americans when they believe that their trust and friendship have been betrayed,” he said.

In his semi-fictional account, premier Li Keqiang and a nucleus of party bosses recognise the danger of this course, fearing a confrontation that China cannot win. They launch their coup d’état once Washington starts to flex its global financial muscles. The trigger is the delisting of 250 Chinese companies on New York exchanges, though China has ironically preempted this with its own curbs.

The incoherence of the Xi model will blunt the threat over time: the contradictions and controls will sap the dynamism out of the Chinese economy. Whether it is backtracking on reform of the dysfunctional state-owned companies (needed for party patronage), or the posting of commissars inside private companies, or the Maoist flirtation with the “autarkic self-sufficiency”, Xi is systematically undoing the Deng legacy that brought China out of the economic dark age.

Demographics will do the rest. The workforce peaked in 2017. It is already shrinking by 3 million a year and the annual decline rate will accelerate to 0.5 per cent after 2030.

There may be a sorpasso a few years hence when China’s economy briefly overtakes the US but it will not last long and the process will then go into reverse. The US is likely to be the world’s unchallenged economic superpower again by mid-century.

This does not preclude a dangerous few years of peak hubris before Chinese decline becomes obvious.